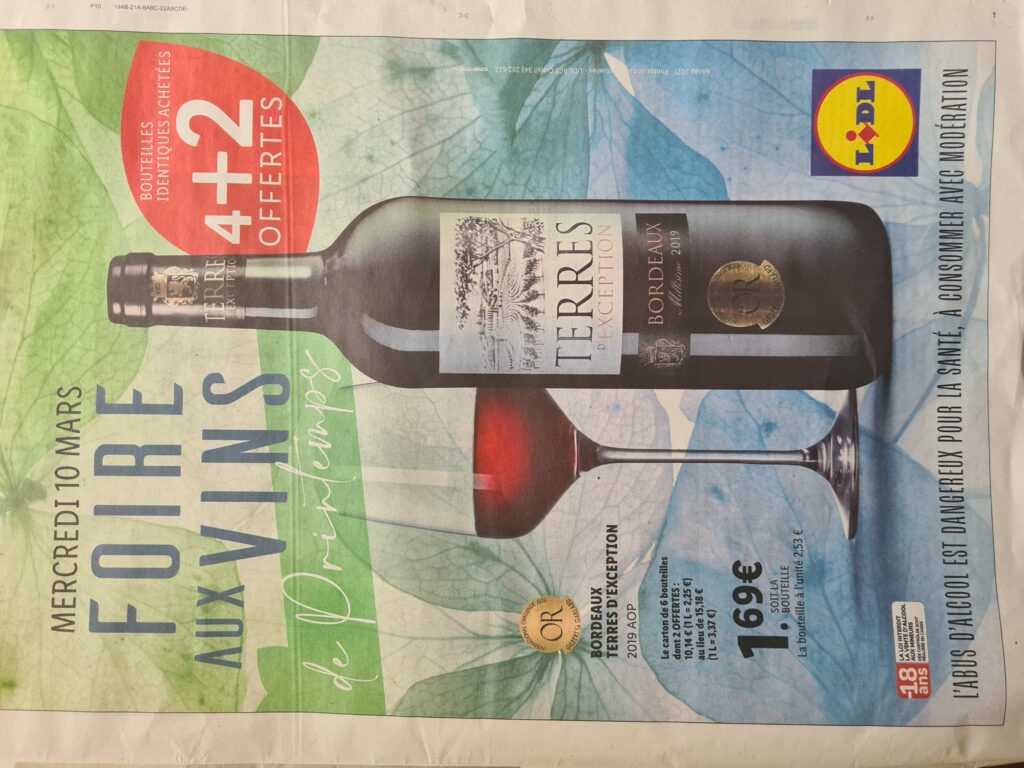 Bordeaux is in a bad way. Oh, I’m not referring to the famous châteaux coveted by wine lovers around the world. I’m talking about the 55% of total production sold under the Bordeaux and Bordeaux Supérieur appellations. This ad in the local Sud-Ouest newspaper on March 10th by the German supermarket group Lidl promotes so-called “award winning” Bordeaux at 1.69 euros a bottle! If you deduct all the fixed costs from beginning to end, what amount can that possibly leave for winegrowers (seeing as it is forbidden to sell under cost price on the retail end)?

The “gold medal” in question is from two French journalists who, in my opinion, should be ashamed of themselves. Their ratings are widely reputed to be based on payments received… In addition, the same ad was run in France’s largest circulation newspaper, Le Monde, showing that the wine in question must be available throughout the country. Putting aside the notion of quality for a moment, how can a blend of such gigantic proportions be considered homogeneous enough to earn a medal?

The rock bottom sales price and misleading medal do an injustice to Bordeaux.

A statistic I recently saw floored me: some 10% of an average crop of Bordeaux wine – we’re talking hundreds of thousands of hectolitres – were distilled last year to make biofuel, paid for by EU and French government subsidies.
Something is very wrong here.

Beaujolais was in a similarly bad predicament not so long ago, with terrible press. But they picked themselves up by the bootstraps and things are better there now.

The French have always been wary of free markets, especially in areas as politically sensitive as agriculture. And city dwellers, who make up most of the population, have a nostalgic, protective attitude towards farmers and winegrowers. It has therefore been expedient for successive governments to avoid the root problem and placate the wine industry. Of course, this cannot go on forever because the situation is clearly unsustainable.

The causes of this sad state of affairs are multiple, but playing the blame game gets no one anywhere. I hope the powers-that-be react intelligently and effectively to find a way to bring supply and demand closer together. No one says that this will be easy, but the present impasse can only last for so long… There is much at stake, but particularly the future of entire swathes of the Bordeaux region’s agricultural land and the families who earn their livelihood from it. The name Bordeaux can bring to mind images of impressive châteaux and self-satisfied négociants, but the truth is that most of the wines are made at modest estates run by hardworking men and women who barely earn a living wage. And their children are increasingly disinclined to take over the family estate…

There are many, many fine examples of entry level Bordeaux. It is therefore heartbreaking to see the whole category rejected by so many opinion leaders, buyers, and consumers. The Bordeaux establishment must face up to the fact that there are simply too many sub-standard wines out there – and do something about it. While timid efforts have been made in the past, these need to be seriously stepped up. Likewise, marketing and promotional budgets should be significantly increased. Alas, there are no quick fixes here… On the commercial end, brand building and the promotion of quality wines from petits châteaux, cooperatives, and négociants needs to be encouraged by every possible means – and thin, weedy wines refused the right to be called Bordeaux.

Of course, there is no easy answer to a problem with such deep roots. I champion Bordeaux at all levels and sincerely hope that things will improve. The potential to do so is unquestionably there.