My blog is only about 6 weeks old and I’m receiving all sorts of advice about how to do things right :-).
I was told, among other things, that it is best to keep posts to about 300 words.
Well, sorry folks, this has proved absolutely impossible with the present post, so please bear with me. At least I’m dividing it into two parts!

I was delighted to accept an invitation to go on a two-day press trip on Sept. 23rd & 24th 2014 to the Graves region, and happy with the prospect of discovering and rediscovering some very worthwhile estates…

I’m not going to go over all the statistics and basic information about the Graves, because you can find this easily enough in reference books and on websites. But I would like to add a few comments you don’t always see… First of all, the Pessac-Léognan region made a deliberate effort to “secede” from the larger Graves region in 1996 to form its own separate appellation. As you can imagine, this created some hard feelings at the time… So, it was especially heartwarming to see Dominique Guignard of Château Guignard representing the Graves AOC and Laurent Cogombles of Château Bouscaut representing the Pessac-Léognan AOC working together to promote their wines.
In fact, the creation of Pessac-Léognan does not go back such a long way, and many people still think of the wines as Graves. Indeed, all the classified growths are in the former appellation, and still refer to themselves as Crus Classés de Graves…

I was part of a group of about 20 people from several countries invited by the syndicats viticoles (now called Organismes de Défense et de Gestion) of Graves and Pesssac-Léognan to spend a day in each appellation. Even though I live in Bordeaux, I gladly accepted the offer of accommodation at a wine estate to avoid the issue of drinking and driving.
I stayed three nights at Château Seguin in Canéjan, a suburb of Bordeaux in the Pessac-Léognan appellation along with a journalist friend from Copenhagen, Izak Litwar. That such estates have survived urban sprawl is a minor miracle. Seguin has lovely grounds and 31 hectares of vines that produce only red wines from equal proportions of Cabernet Sauvignon and Merlot. Surrounded by one of France’s largest cities, Seguin is an oasis of peace and natural beauty. Only the faint noise of a nearby highway reminds you that “civilization” is nearby…
Château Seguin is managed by Denis Darriet, an intense man whose previous career was creating exquisite jewelry in Paris for some of the world’s wealthiest people. Denis is bundle of energy and has many endearing qualities I equate with southwest France. He is definitely a hands-on manager, and is intimately acquainted with work in the vineyard because he had done it all himself and is often out there with his workers. Nothing theoretical here! On Monday night, Denis invited me to taste his wines, and then to enjoy them at dinner. I sampled 2008, 9, 10, 11, and 12 Château Seguin. I had a preference for the 11, 09, and 08, but these are obviously wines that need to age. I should add that the 2010 had evolved nicely in the decanter by the next day. Denis also opened bottles of Seguin’s super cuvée, Confidences, from the 2006 and 2009 vintages. These are unfined and unfiltered and would wreak havoc in a blind tasting, especially the 2009, which is a world-class wine. 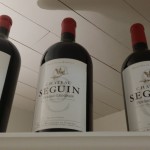 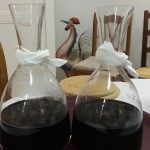 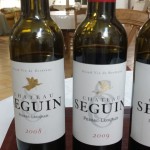 As for Ch. de Lionne, this is located in Mazères, near the southern tip of the Graves – which, in fact, extends further south than Sauternes, and even the other side of Langon. Ch. de Lionne has 36 hectares of vines on sand and gravel soil: 29 planted with red wine varieties and 8 with white. The estate is owned and managed by Véronique Smati. While she cannot exactly be defined as a lioness (lionne = female lion in French), Mme Smati is definitely a powerhouse, a maîtresse femme as the French say, who seems to do the work of several people! I was introduced to her in the fermentation cellar as she was discussing her 2014 white wines with her assistant and a consulting enologist. Like every other estate we visited, the white wine harvest had just finished and preparations were under way to receive the red wine grapes. Mme Smati showed me around and her assistant, Joanna Gousse, poured two wines to taste, a refreshing fruity 2012 white and a soft, upfront 2011 red with a plummy nose and sweet fruit on the palate. Both are for medium-term ageing. 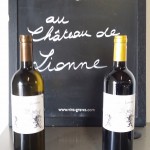 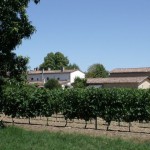 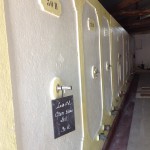 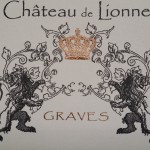 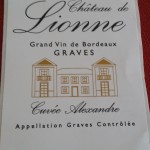 Joanna then drove me to Ch. Ferrande in Castres, a huge 94-hectare estate belong to the Castel group, France’s and Europe’s largest wine merchant. A tasting had been arranged there of approximately 15 red and 15 white Graves. Here are my notes (since color is not such a major consideration for these young wines, I have only mentioned it when this was out of the ordinary):

2013 Clos Floridène
Nose: good, rich, fresh, and expressive
Palate: round, mouth-filling, with a fine tangy aftertaste, one of the best of the tasting

2013 Ch. Vénus
Nose: fine, generous, and fruity
Palate: silky-smooth and lovely follow-through and finish. Complete and satisfying, one of the top wines that day

2013 Ferrande
Nose: on the neutral side at this stage
Palate: the taste has more character, but is a little weak on the middle palate. The finish is better, with a great lemony Graves flavour.

2012 Haut Reys
Nose: discreet, with some tropical fruit (pineapple) overtones
Palate: OK, with some grip on the slightly bitter finish and a certain minerality that helps to hold the wine together

2013 Rahoul
Nose: refined, classic, rich, and great traditional Graves bouquet
Palate: full and rich with flavours that follow on from the bouquet. This wine was a little old-fashioned and stood out as being more akin to Pessac-Léognan than southern Graves. Lovely citrus/lemon overtones. Best wine of the tasting for me.

2011 Ch. Ferrande
Nose: wild berries, sweet, and rich
Palate: round, sweet once again, but a little confected and with a relatively short aftertaste

2011 Haut Reys
Nose: unexciting and underdeveloped at this stage
Palate: soft, forward, and tangy with a finish that winds up an unimpressive wine with some panache

2011 Clos Floridène
Nose: good oak and subtle berry aromas
Palate: smooth and seamless with good acidity on the aftertaste. Some greenness with the fruit, but of the positive, rather than the underripe kind. A real crowd-pleaser. Slightly dry finish, but has good ageing potential.

2011 Chantegrive
Nose: lovely, classic Bordeaux, seems more Médoc-like than Graves
Palate: melts in the mouth and develops well, but the aftertaste is a little too dry and oaky. Will this change over time?

2011 Vénus
Nose: sweet, but unfocused
Palate: too indeterminate. Starts out sweet and seductive, and then takes a different turn, showing too much oak and/or extraction.

2011 Doms
Nose: ripe and deep, with aromas the French call “petits fruits rouges”
Palate: round, soft, silky, and forthright – a salt-of-the-earth kind of wine. Seems a little dry, with a touch of bitterness on the tail end, but fruit predominates.

2011 Roquetaillade La Grange
Nose: soft, with subtle oak, but not forthcoming at the present time
Palate: much better impression on the palate. Big, sensual, plush, and melts in the mouth. The aftertaste shows some hardness, and a little less oak influence might have been in order here. Still, a good wine that will develop well over time.

2011 Saint Robert “Ponset-Deville”
Nose: oak masks the sweet dark berry fruit at present
Palate: classy and tangy, with a tarry character. Oak has the upper hand, but this may come together more in a few years due to good acidity.

2011 Ch. de Portets
Nose: toasty oak more than anything else
Palate: sweet, soft, old-style, with good grip and a touch of bitterness on the aftertaste. Authentic, and reflects its terroir. Best with full-flavored food.

Lunch was at Château Magence in Saint-Pierre-de-Mons, where I was warmly welcomed by Jean d’Antras and his parents.
This well-known estate has 39 hectares of vines (30 of red and 9 of white). We enjoyed the 2005 and 2001 red Magence at lunch and, since we had discussed Jean’s surprising experience with the 1985 white in the car, he kindly opened a bottle of this.
Dating from the early 18th century, the château itself is long and low, in the classic Girondin style. The living room is huge, with lovely furniture and even an ancient winepress! Madame d’Antras was née Guillot de Suduiraut, and her family were former owners of Suduiraut and Rayne Vigneau in Sauternes. I had heard of semi-precious stones found at the latter estate, and Mme d’Antras has a showcase of some polished gems found there. 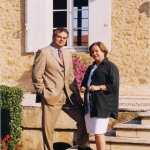 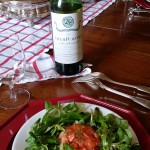 After Magence, I went to Château Caillivet in Mazères where I was looked after by Célia Carillo. She and her brother run the estate that was created ex nihlo in the 1970s by their grandparents, originally from Spain. Antoine, a qualified enologist, was responsible for converting farmland to winegrowing and the first vintage dates from 2001 (and the first of white wine from 2011). The family came to the painful conclusion that due to retirement of one generation and inheritance taxes to be paid by the next, they would need to sell the estate. They did so in 2013 to Mr. Olivier Bourreau, an industrialist from the center of France, who takes an active interest in Caillivet and goes there often. Célia and her brother have nevertheless stayed on to manage things. Caillivet is set on a rise, with a lovely view of the surrounding countryside. The 2011 red caught my attention with a sweet, almost Pinot-like, slightly herbaceous nose and good vinosity. The 2013 white was brimming with upfront fruit. The château sells an impressive 70% of production directly to private customers. 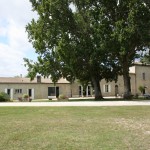 The evening ended with dinner at Château Pape Clément. There were 9 of us, including Wine Tourism Manager Alaïs Riglet (formerly at La Tour Carnet in the Médoc), representatives of the Graves and Pessac-Léognan winegrowers associations, Denis Darriet of Ch. Seguin, and Jean-Jacques Bonnie of Ch. Malartic-Lagravière. We toured the impressive cellars and then had an aperitif (2007 white Pape Clément) in a room resembling a museum with all sorts of religious artefacts, including an ornate chasuble on a wooden clothes horse! The dining room was just across the hall and we enjoyed a gourmet meal there in a relaxed, good-natured atmosphere despite the rather formal setting. I much appreciated the rare 1997 white Pape Clément and the red from the same year, with its tell-tale burnt earth aromas and fine quality despite the difficult year. I was also poured a glass of Ch. Clos Haut-Peyraguey (a wine I’ve always appreciated) with dessert.

The unstoppable Bernard Magrez couldn’t be with us that evening because, at age 78, he was off promoting his wines elsewhere that evening. This lucky man has great growths in each Bordeaux appellation with a classification (La Tour Carnet in the Médoc, Pape Clément in the Graves, Fombrauge in Saint Emilion, and Clos Haut Peyraguey in Sauternes). 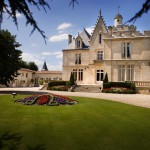 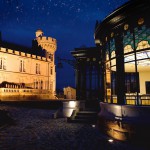 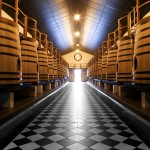 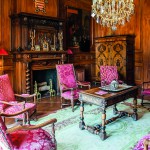 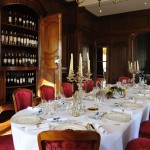 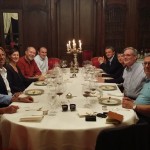 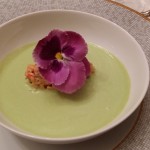 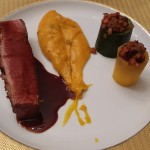 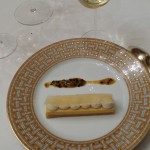