I have met Jean Guyon only once, a few years ago when I was invited to dinner at Château Haut-Condissas in Bégadan with a group of wine lovers from www.bordeauxwineenthusiasts.com
I might add that he correctly identified a wine served blind on that occasion (château and vintage – it was an old Beychevelle).
Jean is very different from your run-of-the-mill château owner. He is plain-spoken and a touch inconoclastic – which suits me just fine. He has got his hands dirty, built an empire of 200 hectares of vines from nothing, and made a great success. His commercial flagship is Château Rollan de By, an excellent AOC Médoc that is competitively priced and critically acclaimed. He also owns Château La Clare, Château Tour Seran, Château Greysac (which he bought from the Agnelli family of Fiat in 2012), etc. in the Médoc.
Total production is approximately 1.3 million bottles.
The cream of all this is Château Haut-Condissas, an AOC Médoc from Bégadan. This ten-hectare vineyard is planted with 60% Merlot, 20% Petit Verdot, 10% Cabernet Sauvignon and 10% Cabernet Franc.
Haut-Condissas was a controversial wine in the past among English-speakers because it achieved unexpectedly stellar results at blind tastings held by the Grand Jury Européen, outdistancing several first growths. People criticized the methodology and thought that the wine must necessarily be a flashy “modern” over-oaked Bordeaux that stands out in a tasting, but is not one for the long haul, or for refined palates…

Being somewhat of a doubting Thomas, I wanted to see for myself, of course.
I had bought a bottle of the 2000 Haut-Condissas at Auchan in the Mériadec shopping center in Bordeaux some time back and decided to open it on New Year’s Day 2015. I figured that fourteen years should let most any wine show most of what it has to deliver. 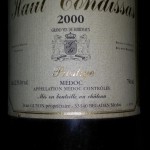 Well, the experience was more positive than I expected.

The color is so deep that I had trouble decanting the wine. The rim is only just starting to brown, making the wine look younger than its age. It also leaves thick sheets on the side of the glass.
The nose shows hints of candied black fruit, cranberry, blackberry jelly, untanned leather, meat, and crushed blackcurrant leaves.
As good as the bouquet is, the wine is even better on the palate, which is chock full of fruit. The tannic texture is coarse-grained, but velvety, and the structure develops effortlessly from spherical into the assertive and penetrating flavour of classic Médoc. The aftertaste is maybe a little short and there’s a certain dryness there, but nothing puts this into the artificial, “manipulated” category. The alcohol content is 13.5% and this comes through in the flavour profile, but does not overwhelm… I would rate the wine 15.5/16 out of 20, keeping in mind that my scores are systematically lower than most other people’s.
I regularly subject my spouse to blind tasting and she thought this 2000 Haut-Condissas was a great growth from Saint-Julien or Pauillac. In fact, I think almost anyone would! The French say of such a complete and richly satisfying wine that it is “à boire et à manger”. It was a fascinating discovery for me, and I am sure that the wine will be even better in years to come…