1999 Château Haut Mayne – I was unfamiliar with this 5-hectare estate in Preignac, but had a bottle of the 99 vintage in the cellar. Friends from Quebec were over to dinner, so I thought I would introduce them to the Bordeaux custom of serving sweet white wine as an aperitif, rather than at the end of the meal with dessert. 1999 was, on the whole, a middling vintage in Sauternes and this wine was certainly not one of the better ones I have encountered…. It was fairly pale and tea-colored, looking older than its age. The nose was fresh, but far more overripe than botrytised. In fact, if served blind, I’d have taken it for a Jurançon, with its pear and gooseberry aromas. Nothing botytritized about it at all. The palate was a let-down to the extent that it started out sweet and luscious, but went nowhere afterward. Definitely your top-heavy, cloying sort Sauternes, without the acidity or touch of bitterness and minerality on the finish to provide balance. Little complexity. Definitely not a success in this vintage. I see that the mix of grape varieties is 90% Sémillon and 10% Sauvignon Blanc. Maybe this needs to be changed to give wine more muscle tone…

2010 Château Chantegrive, Graves blanc, Cuvée Caroline – Chantegrive is a large (nearly 80 hectare) estate located in Podensac in the southern Graves. They make about twice as much red as they do white. They also produce an AOC Cérons.  Chantegrive is a success story achieved by the late Henri Lévêque, a wine broker and well-known Bordeaux personality. The wines are well-distributed in local restaurants and I have many times enjoyed both the red and white wines. This 2010 cuvée prestige white is made from equal parts of Sémillon and Sauvignon Blanc. It is straw-yellow in color and has a lemony and slightly medicinal bouquet. On the whole, the nose is rather subdued and a touch smoky. The palate is frankly disappointing to me: angular and acidic. I’ve had better bottles of this and prefer to think that this departure from a proven track record is just a blip. 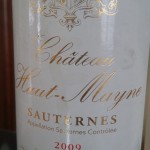 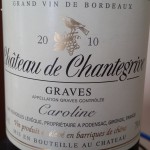 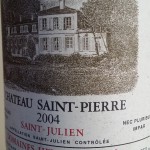 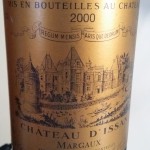 2004 Château Saint Pierre, Saint Julien – 2004 Bordeaux is receiving much good press at the moment. I decided to open this one up for my guests because is not one of the most commonly found great growths. 2004 Saint Pierre had a very dark core, but the browning rim made it look older than its age.  The nose was redolent of caramel, beeswax on a parquet floor, forest floor (sorry for all the floors…), and understated black fruit. The wine was a little thin and dilute, but had interesting cedar and chocolate overtones and a quality I can only describe as ferrous. Solid rather than exciting and fully ready to drink. I have enjoyed Saint Pierre very much in the past, considering it one of the best values among the crus classés. I fell in love with the 2009 and have a few bottles in the cellar. The 2004 is OK in light of the vintage.

2000 Château d’Issan, Margaux  – I’ve been opening up my lesser and mid-range Bordeaux from the 2000 vintage lately and almost all of them have been ready to go. So, seeing as I had several bottles of the 2000 d’Issan, I figured I would check out how a more up-market wine was doing. The wine had a lovely deep, dark color with medium bricking on the rim. The nose was absolutely lovely, corresponding to that mythical, but elusive feminine Margaux quality one hears cited but actually encounters far less often… Ethereal blackcurrant jelly overtones as well as hints of pencil shavings and truffle. In fact, this is not the first time that I have seen similarities between a Margaux and a fine Pomerol. Anyway, the wine starts out beautifully generous and smooth although it falls down somewhat (tad weak and dilute) on the middle palate. However, it rebounds on the finish with strong tannin. This imparts a little dryness – some of which seems due to oak. So, this 2000 d’Issan is a fine glass of wine, but the balance is not quite there. By the time the tannin evens out, I wonder if that impression of dryness might not increase, and the fruit diminish. Still, this wine has loads of class, and a first class sweet bouquet.