Sorry for the hiatus in my posts. The main reason for this was a major undertaking in May and June: a pilgrimage. Leaving from Saint-Jean-Pied-de-Port in the French Basque country, I walked with my friend Pétrus Desbois some 800 km to Santiago de Compostela on a route that has been travelled by other pilgrims (of varying motivations) for centuries. A description of this wonderful experience lasting five weeks is certainly worthy of a long post with photos, but perhaps not on a blog devoted to Bordeaux wine…
Therefore, it’s back to the fascinating world of Bordeaux for me and my readers!

After a month in Spain, and weighing a few pounds less, I was delighted to see may family again and rediscover the creature comforts of home including, of course, my wine cellar!

So my re-introduction to Bordeaux was a dinner with two wines. 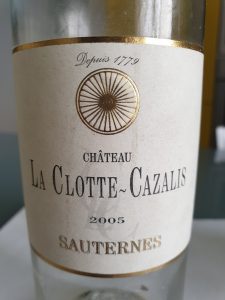 The first was a Sauternes or, more exactly, a Barsac choosing to be sold under the Sauternes appellation. 2005 Château La Clotte Cazalis had a medium-deep golden-amber color. The bouquet displayed fresh candied fruit, honey, and raisined grape nuances than botyritized ones. As befits a Barsac, the wine was not weighty on the palate. Featuring barley sugar flavors, it was on the whole somewhat weak, leading me to think that one of the better wines from the other side of the Garonne (Loupiac, Sainte-Croix-du-Mont, Cadillac) might be just as good. This Barsac seemed younger than its age and more of a late-harvest wine than one made with noble rot. 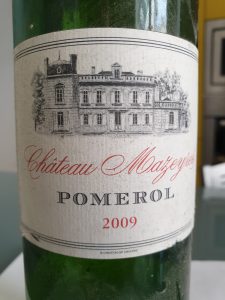 The red wine to follow was 2009 Château Mazeyres from Pomerol. I remember tasting 2009 Right Bank wines en primeur and finding them rather big and alcoholic, and wondering how they would age. Recent experience has tended to show that they are on the early-maturing side. 2009 Mazeyres, made by the eccentric Alain Moueix, had a deep, dark core with marked bricking, looking perhaps older than its ten years. The nose, as expected, was redolent of ripe Merlot with some empyreumatic overtones. There were ethereal floral aromas as well, along with hints of resin and coffee, but the bouquet was nevertheless somewhat one-dimensional. This medium-weight wine was svelte and slightly minty on the palate, along with dark chocolate and licorice flavors. It was undoubtedly ready to drink and, in fact, just starting to dry out. This was a fine example of a good, affordable Pomerol that probably showed better at table than it would have in a tasting line-up.