Bordeaux almost inevitably involves a blend of grape varieties, one of the factors that accounts for its wonderful complexity. Of course, wines made from a single variety do exist, but they are very much in the minority.
As in other regions around the world, Bordeaux is worried about the effects of global warming and is timidly, and on an experimental basis, allowing wines to contain up to 5% of the following new varieties (six out of the fifty-two pre-tested) starting with the 2021 vintage – even if these are not permitted to be mentioned on the label. The purpose here is to adapt to hotter summers without altering Bordeaux’s typicity – so it is only normal to proceed gingerly.

REDS:
Arinarnoa – a hardy cross between Tannat and Cabernet Sauvignon first produced by INRA (the  French National Research Institute) in 1956
Castets – a “forgotten” disease-resistant variety from Southwest France
Marselan – a frost-resistant and disease-resistant cross between Cabernet Sauvignon and Grenache produced by INRA in 1961
Touriga Nacional – one of the main varieties used to make Port wine that is well suited to climate change and especially propitious to producing excellent ageworthy wines

WHITES:
Alvarinho – This variety is called Albarino in the Spanish province of Galicia, and Alvarinho in the Portuguese province of Minho. It is very aromatic and helps compensate for the loss of aromas due to climate change. It is also adaptable to climatic conditions and produces wines with good acidity.
Liliorila – a cross between Baroque and Chardonnay, this variety is resistant to gray rot and produces powerful aromatic wines. 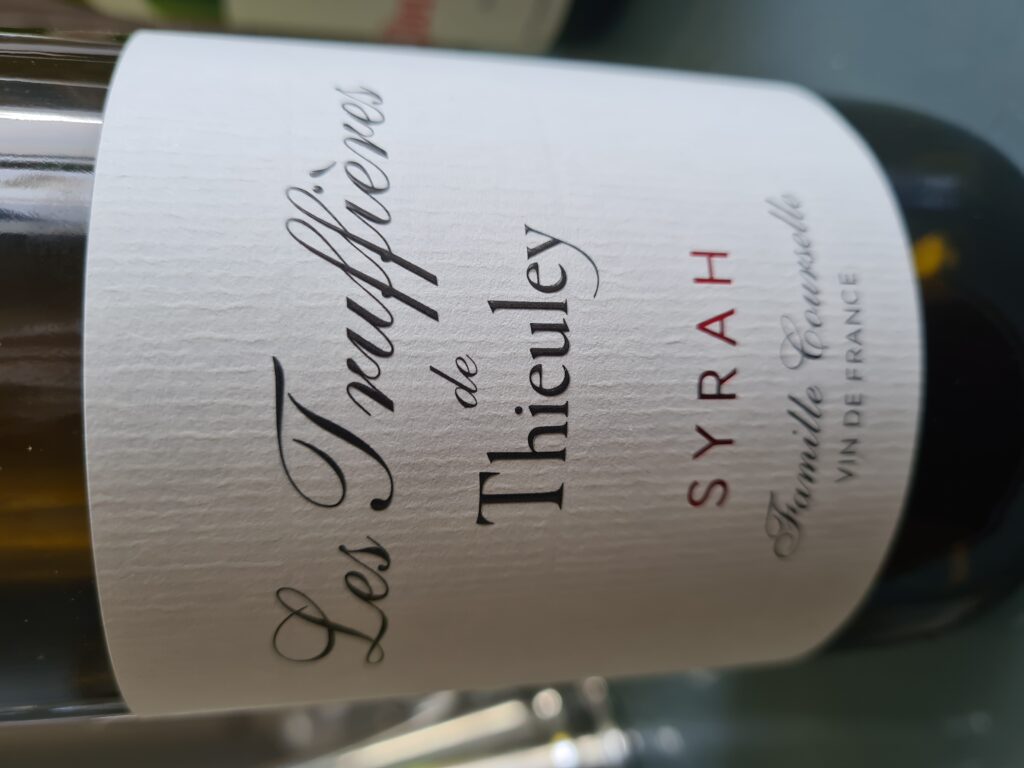 That having been said, wines from “non-authorized” grape varieties, sold as “vin de France” rather than Bordeaux, have been around for a long time. I was nevertheless intrigued to see a Syrah for the first time recently in a wine shop, Pied à Terre on rue Judaïque in Bordeaux, and snapped it up. The wine is made by Château Thieuley, which I have often enjoyed through the years. Located in La Sauve Majeure in the Entre-Deux-Mers, Thieuley is a great success story and grew from a tiny vineyard in the 1950s to an impressive 83 hectares today. It is expertly managed by Marie and Sylvie Courselle.

Just 8,000 bottles of 2016 Syrah were produced from deep clay-limestone soil. The wine was fermented in small temperature-controlled cement vats and aged in barrel (50% new) for 18 months.
I served this wine blind at lunch to friends in the trade and, unsurprisingly, they were stumped. I can’t really say that it showed a lot of varietal character and there was nothing here reminiscent of the Northern Rhône, but it was certainly robust and user-friendly. I saw this as the kind of wine best consumed young and am grateful for the experience. For information, the price tag was about 16 euros.

This Syrah was served with my first attempt at making a parmentier de canard, a variation of what the English call a shepherd’s pie made with duck confit instead of ground beef. The hearty, fruity wine went well with the dish. 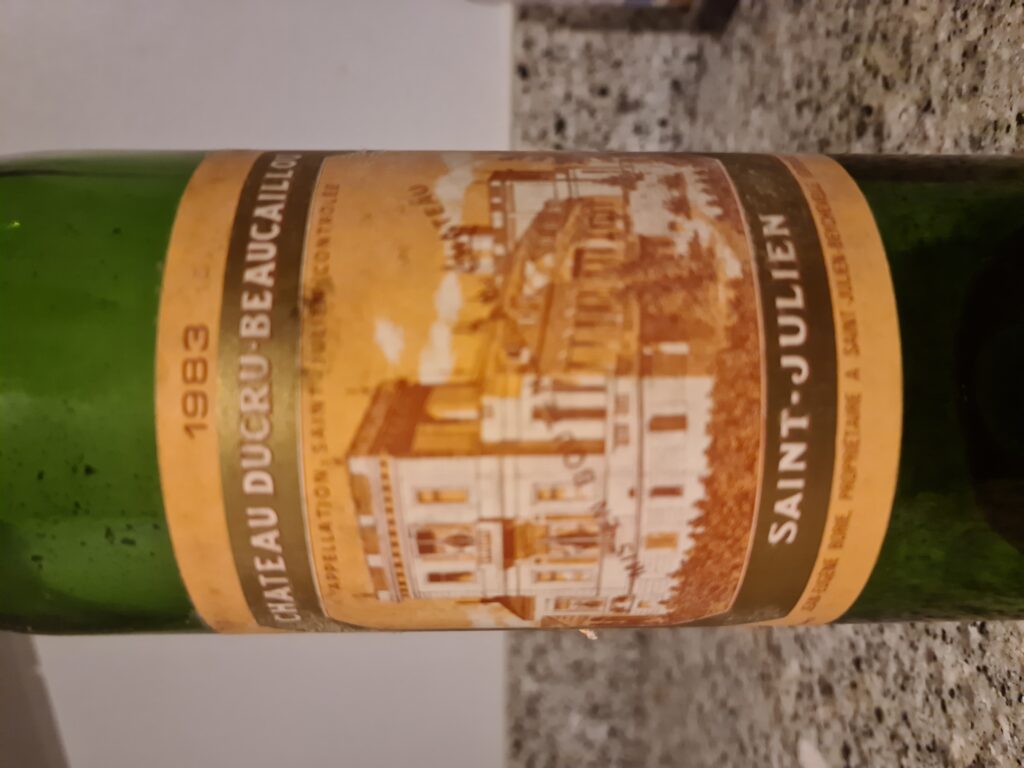 The best and oldest red wine is traditionally reserved for the cheese course in Bordeaux. A modern revisionist wave criticizes this practice, and I partially agree. On the one hand, a delicious old wine can sometimes by underwhelming after a vigorous young one that precedes it. And, on the other hand, it is true that certain cheeses overpower the subtleties of fine wine. Some people go so far as to ban red wine with cheese, insisting on serving only whites… In any event, my conservative streak comes through on this matter, especially when I have French friends over for a meal, because the best, oldest red wine with the cheese is what they expect.
For the record, we had four cheeses: a Selles-sur-Cher goat’s cheese, Roquefort, a Mont d’Or, and an utterly delicious Italian cheese, Moliterno sheep’s cheese with truffle. As for the Moliterno, it sounds terribly expensive and snobbish, but it was bought for a very reasonable price at the local Auchan hypermarket.

So, I had opened my bottle of 1983 Ducru Beaucaillou about 3 hours beforehand and decanted it just prior to serving it blind. My guests immediately said “Left Bank Bordeaux”, and such is the classicism of this wine that this was, in fact, pretty obvious. It was thought to be a more northerly Médoc, possibly a Saint-Estèphe, from the late 80s/early 90s. Its pedigree (i.e. cru classé status) was never doubted and, in light of its quality, my guests were not really surprised when it was revealed to be a “super-second”. 1983 Ducru exemplified the elegance and restraint of the finest Bordeaux. The color was a little more youthful than its age would suggest and the nose was a sublime mix of anise, tar, humus, cassis, and a myriad of undefinable aromas to form a very special bouquet. The wine was fresh on the palate, with the unmistakable stamp of fine Cabernet and a surprising amount of tannin on the aftertaste. This was largely resolved and fit in beautifully. The notion of peak is highly subjective, but I would say that this was slightly past it, but still very much alive and kicking!
1983 is the year my daughter was born, so this held special significance for me. It was also what the Bordelais call an “Atlantic vintage” i.e. more typical of the region’s climate, which is fairly rainy and temperate, than a hot, dry year accounting for richer more alcoholic wines. To many Bordeaux lovers, the former are more authentic, digestible, and loveable wines than ones from much-heralded great years. This 83 had 12.5% alc./vol., which would seem pretty lily-livered by today’s standards…
I was a bit worried because there was a period in the late 80s/early 90s when Ducru had a serious TCA problem and many bottles had to be poured down the drain. However, this 83 was from before that period, which is long since past.

We ended the meal with a half bottle of 2010 Château Guiraud, a premier cru from Sauternes that was perhaps too young, and perhaps did not receive quite the attention it deserved, but was a fine accompaniment to a lemon meringue pie.