Even though I’m not very skilled at preparing it myself, I love Chinese food. My interest was therefore piqued in 2015, when a Chinese entrepreneur purchased Dubern, a Bordeaux restaurant and institution dating back to 1894.

Fifty-five-year-old James Zhou made a fortune by turning his small family firm into a powerhouse specialized in packaging, including the production of cans for Red Bull and Coca Cola in China. Francophile Mr. Zhou bought a wine estate in Tabanac (Château Renon in the Cadillac Côtes de Bordeaux appellation – http://www.chateau-renon.fr/ ) in 2014, as well as the Auxerre football club in 2016. 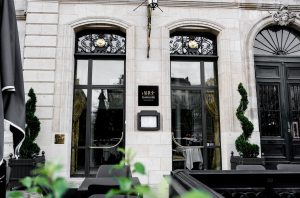 In much the same spirit as he totally renovated Château Renon, Mr. Zhou successfully reinvented Dubern as Quanjude, which opened in November 2018. There are more than 50 Quanjude restaurants around the world, operated on a franchise basis. Some of them take up five floors and can seat up to 500 diners.

Three things make the one in Bordeaux unique.

For starters, it is the first to open in Europe, although several others are planned, starting with Paris. 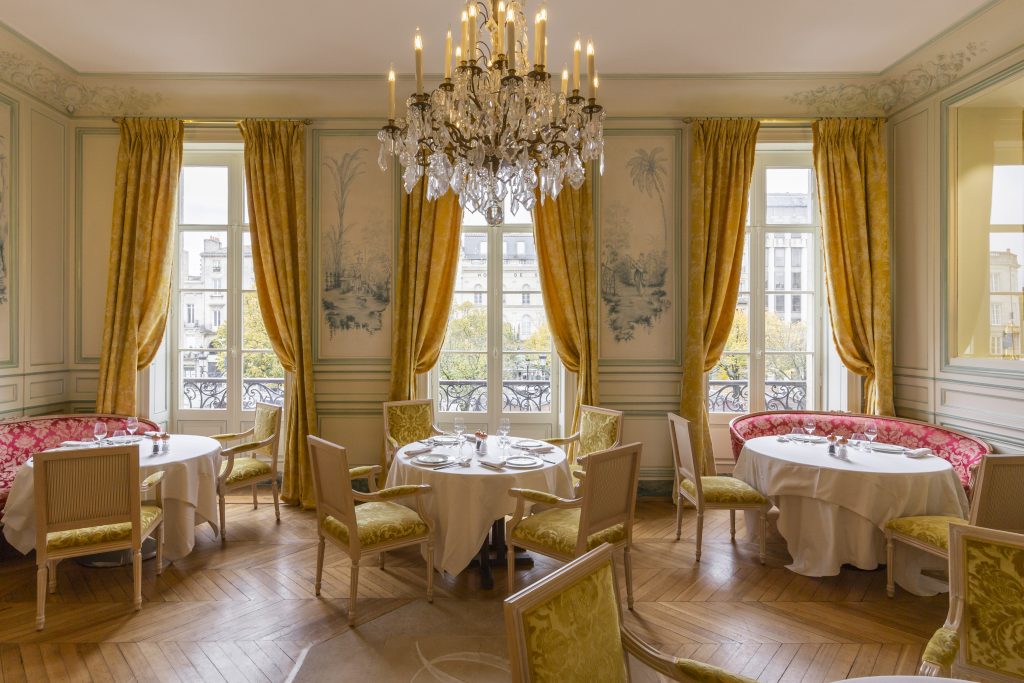 The second reason is the restaurant’s hybrid Franco-Chinese style. Much effort was put into the decor, a very attractive blend of the Louis XIV style and Chinese chic, with tastefully-painted wall panels and beautiful furniture. The dining rooms are small and intimate. As might be expected, the porcelain is gorgeous. The staff are mostly French, including chef Olivier Peyronnet, and the cuisine is a delightful synthesis of French and Chinese influences. 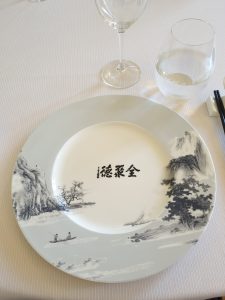 I have a soft spot for restaurants such as Quanjude with a rather short menu. It shows that they have chosen to concentrate on what they do best. Normally speaking, I would have chosen the Peking duck, a dish on which Quanjude’s reputation was built, but this needs to be ordered by at least two people. Seeing as I was dining with my wife, who is allergic to gluten, this was not an option. 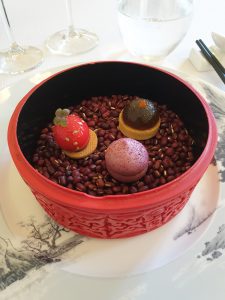 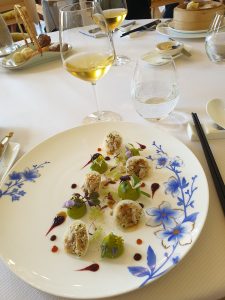 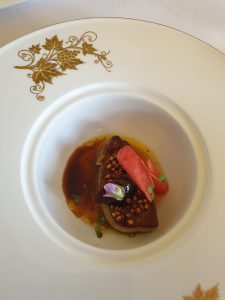 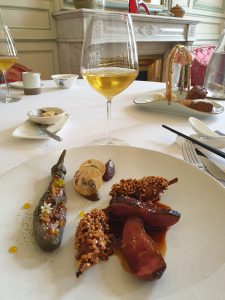 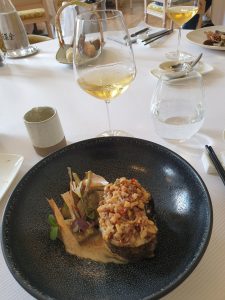 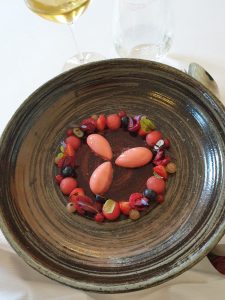 The series of dishes we sampled was visually enticing, delicious, and very refined. I will come back again for the Peking duck. To give you an idea of pricing, a seven course dinner revolving around this dish costs 100 euros. The regular evening menu is 60 euros. More information, of course, can be found on their web site: https://quanjude-bordeaux.com/

I came away totally enchanted with Quanjude. The setting is both luxurious and relaxed, and the food is exquisite. Just the day before, I had been invited to lunch at a Michelin-starred restaurant I will not name. It was pretty much of a disaster. So the class act at Quanjude was doubly appreciated. I would best describe a meal there as a gracious gastronomic experience light years away from the typical Chinese restaurant (egg rolls, sweet and sour pork, fried rice, etc.). 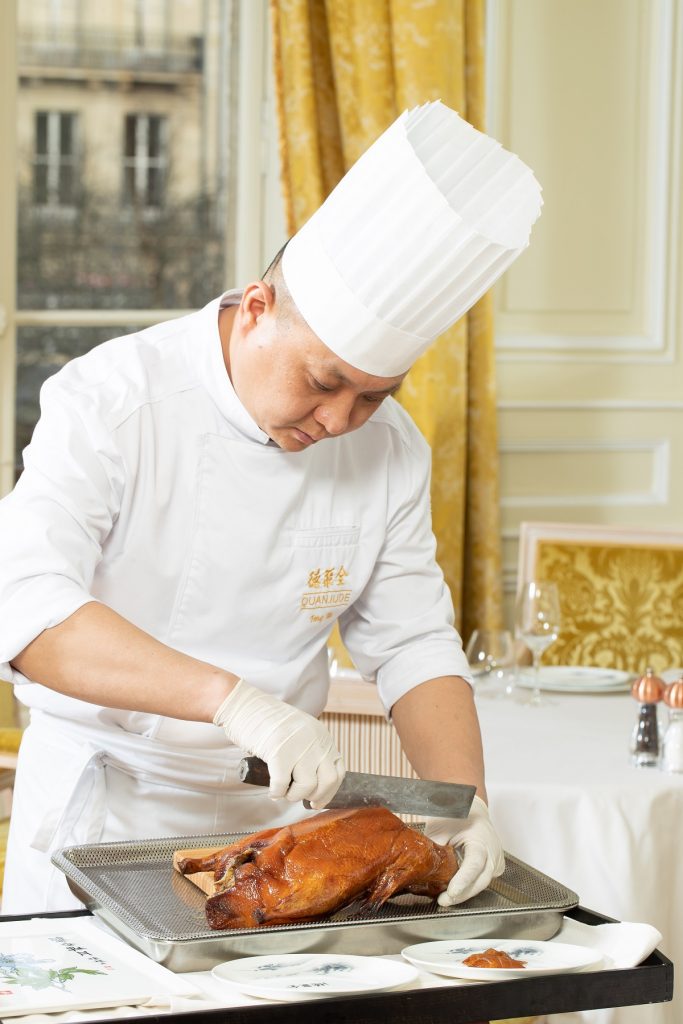 And as much as I love typical dishes from Southwest France – and I’m sure that is what visitors to Bordeaux are mainly seeking – I would warmly recommend Quanjude to anyone staying a few days who is looking for a refreshing departure from the usual litany of oysters, duck breast, entrecote, etc. 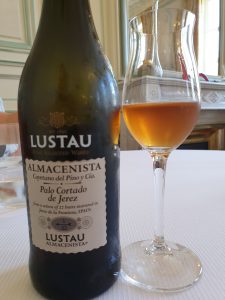 Then, of course, the third reason Quanjude Bordeaux is unique is wine. Reflecting the food menu, the wine list is on the short side, but with some very interesting bottles of various origins. Mark-ups are usual for this sort of establishment. I was delighted to see they offered a rare Palo Cortado sherry from the house of Lustau, so my wife and I enjoyed a glass as an aperitif. This was a medium-deep amber color and had a beautiful nutty, caramel nose. It was full-bodied with a soft, mineral, lingering finish. What a treat! It showed how much Bordeaux has changed over the years. Finding a unicorn wine like this would have been impossible not so long ago… 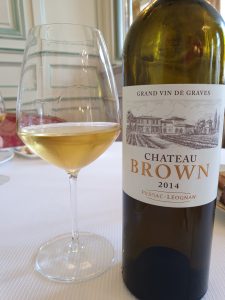 Seeing as I had chosen pigeon and my wife monkfish, we opted for a white wine, a 2014 Château Brown from Pessac-Léognan. I had discussed the choice with sommelière Thao Vo and she said that this was the one she would have recommended had I not mentioned it… I have appreciated white Château Brown (no, not a contradiction in terms!) for years and, in fact, prefer it to the red. The 2014 was a pale golden-yellow color with a complex bouquet of gooseberry, lemon, lanolin, and vanilla. The wine was luscious on the palate – very typical of its appellation – with a marked, but not obtrusive oak influence. 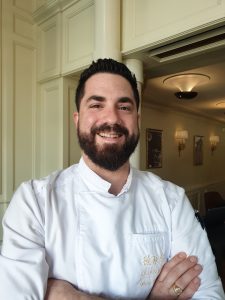 There is much discussion in France about matching wine and food. Frankly, I find much of it affected and superfluous. The same goes for wine with Chinese cuisine. I asked several people at Quanjude about this, and they agreed that other than a few very basic “rules”, most wines go very well with Chinese dishes. It’s as simple as that. I tend to favor white wines as a rule, but I’m determined to give the reds a go soon. Obviously, very spicy dishes do not partner well with many wines, but sweet white Bordeaux accompanies them surprisingly well. 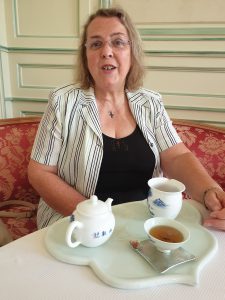 As you might expect, Quanjude takes tea seriously. After the meal, my wife had red tea which was served with the appropriate decorum.