Bordeaux has been a magnet for enterprising foreigners for centuries, and one of the leading lights in recent years is Silvio Denz, a Swiss-German with a finger in many pies.
The former owner of a chain of perfume shops in his native country, he also created several successful perfume brands, took over Glenturret distillery in Scotland with a Swiss partner, invested in vineyards in Spain (Clos Agon in Catalonia) and Italy (Montepeloso in Tuscany), established a leading wine auction house, etc. etc.

In France, he acquired the prestigious firm of Lalique (glass art) – https://www.lalique.com/fr/la-maison-lalique – as well as three wine estates on Bordeaux’s Right Bank: Château Faugères and Péby Faugères in Saint Emilion (crus classés) and Cap de Faugères in the Côtes de Castillon. And as if that were not enough, he also purchased Château Lafaurie-Peyraguey, a first growth Sauternes in Bommes dating back to the 17th century… and created a luxury hotel-restaurant there in June 2018, receiving a Michelin star for the latter just six months later!

This was not Mr. Denz’s first venture into the restaurant business. In 2014, he became the owner of Château Hochberg (https://chateauhochberg.com/en/) opposite the Lalique Museum in Wingen-sur-Moder (Alsace) and, in the same town, he transformed the house of René Lalique into a five-star hotel and restaurant with two Michelin stars: https://villarenelalique.com/en/

The 200 m² cellar at Villa Lalique was designed by the noted Swiss architect Mario Botta. Cases of wine are stored behind large plate glass windows where visitors can view an outstanding collection of 12,000 bottles.

This rather long, but necessary introduction brings us to Lalique.

As I have mentioned before on this blog, Sauternes has unfortunately lost traction over the past few years. The value of vineyard land has stagnated, sweet wines have lost their allure in many quarters, and the younger generation seems not to know the wine.

However, things are looking up. Many producers are now making wines that are slightly less sweet and full-bodied, while retaining the unique character of their terroir. In addition, seeing as land prices had pretty much hit rock bottom, some major investments have been made in the past several years. Furthermore, the potential for wine tourism is beginning to be exploited because Sauternes is a beautiful region with many impressive châteaux. 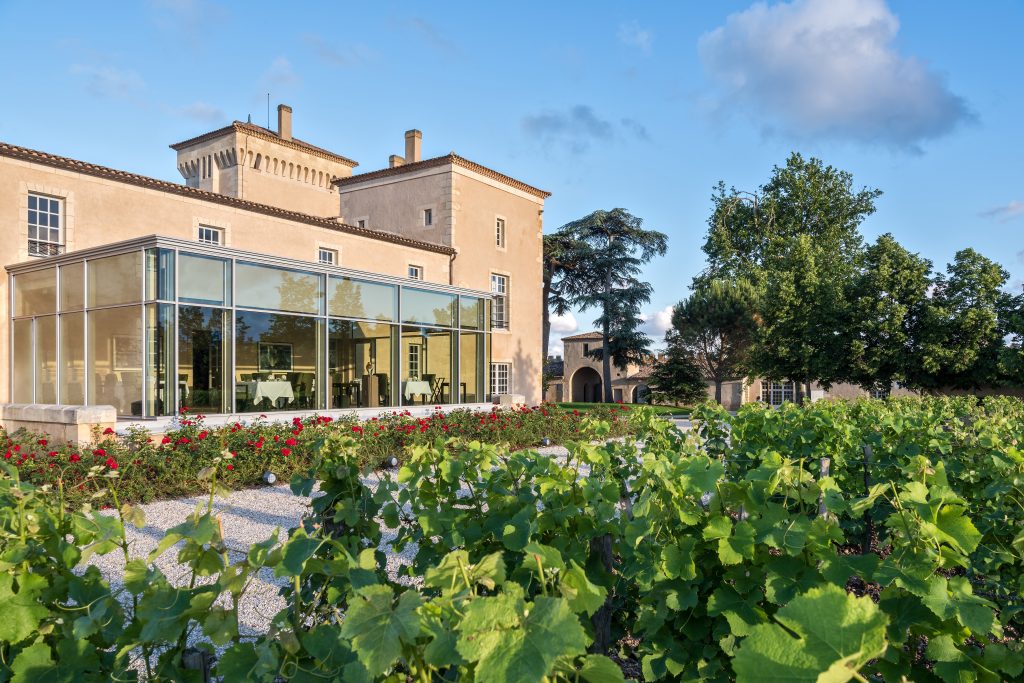 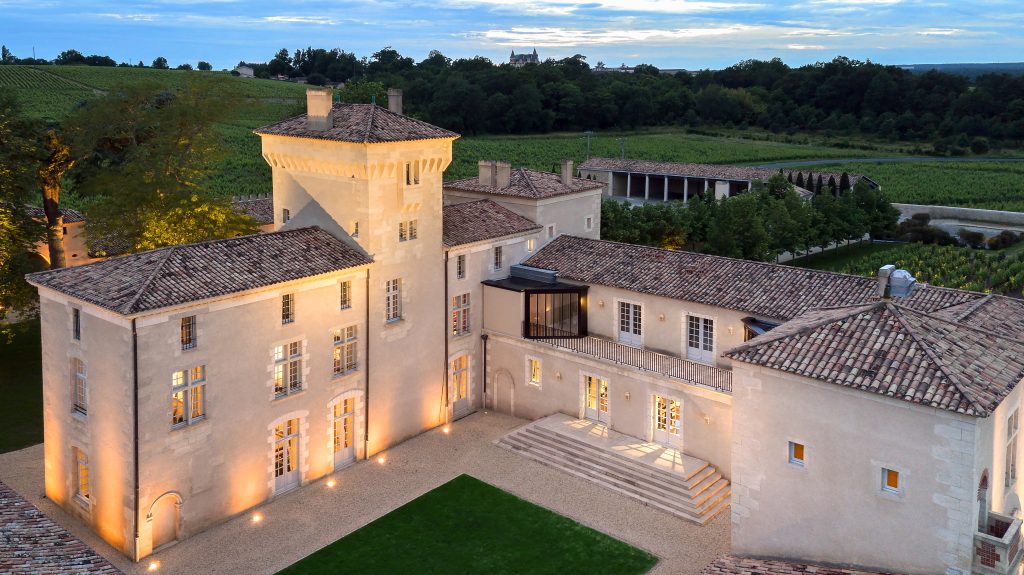 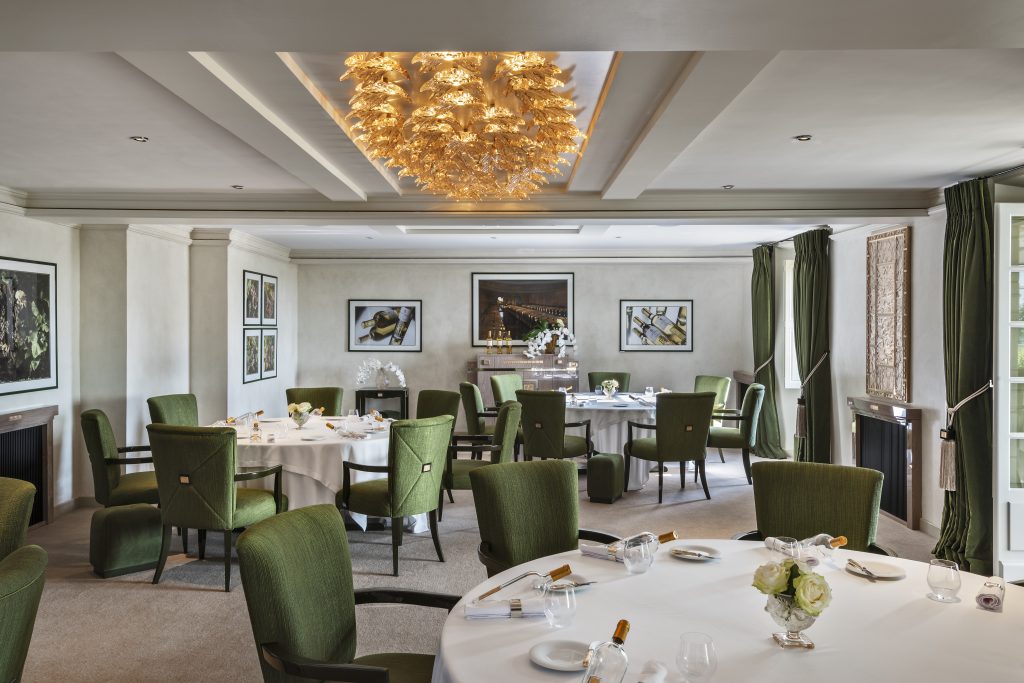 Silvio Denz had a vision. Above and beyond making wine worthy of Lafaurie-Peyraguey’s first growth status, he was determined to open a successful luxury hotel-restaurant. It looks as though no expense was spared. The richly-furnished hotel houses 10 rooms and 3 suites. The restaurant’s interior design is also very attractive and the Lalique imprint is everywhere, down to the taps in the washrooms!
The château gift shop sells all the Denz wines in their specially engraved bottles as well as the beautiful glass sculptures for which Lalique is famous. Furthermore, the shop will etch a personal message on bottles if requested. 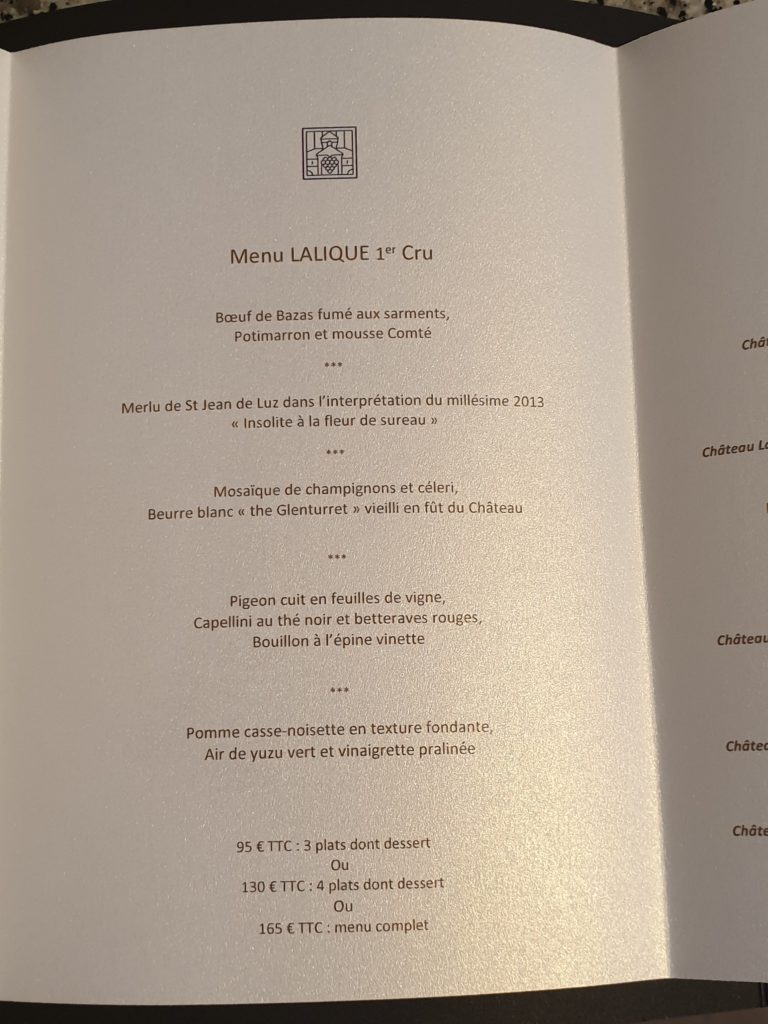 As befits a premium restaurant, prices are not cheap, but there is a luncheon menu at 65 euros. The seven-course tasting menu with a wine to match each one costs 245 menus. My wife and I enjoyed the “Lalique Premier Cru” menu – see photo – with four wines: the 2015 dry Lafaurie Peyraguey, the 2016 grand vin (Sauternes), the ’99 grand vin, and a rare 2016 cuvée made from all the first growths of Bommes except Clos Haut Peyraguey (i.e. Lafaurie-Peyraguey, Rabaud Promis, Sigalas Rabaud, Latour Blanche, and Rayne Vigneau). The Lafaurie wines showed that the new owner has no need to turn everything upside down to produce great wine because the estate has a long history of this, and never underwent an eclipse. 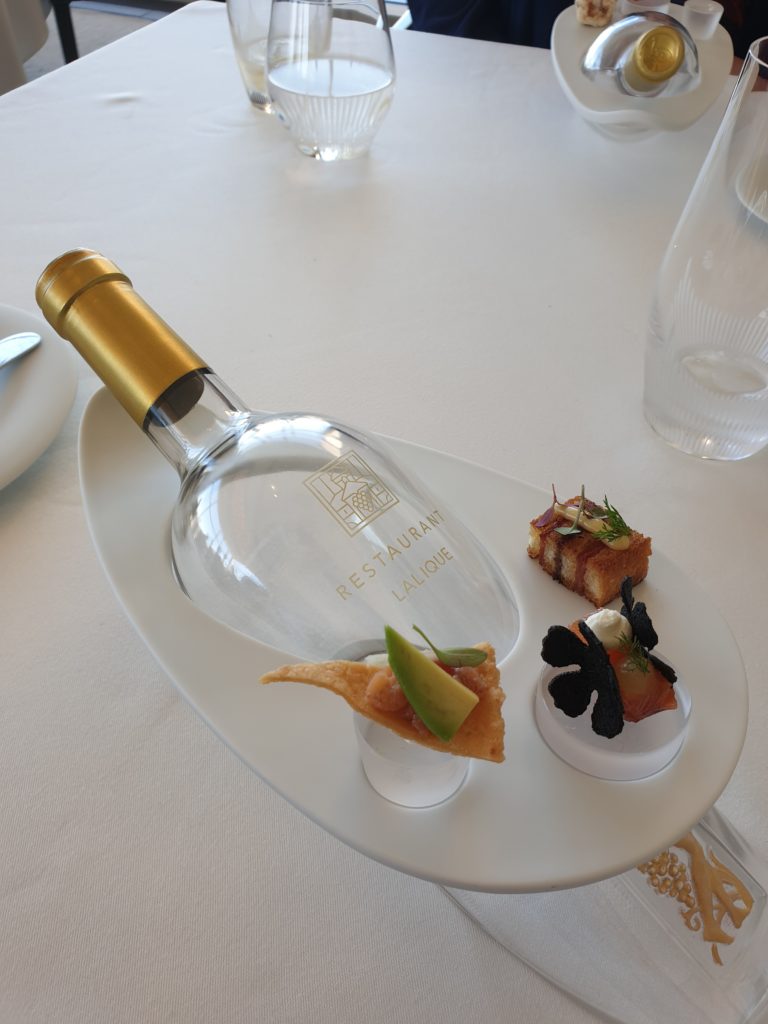 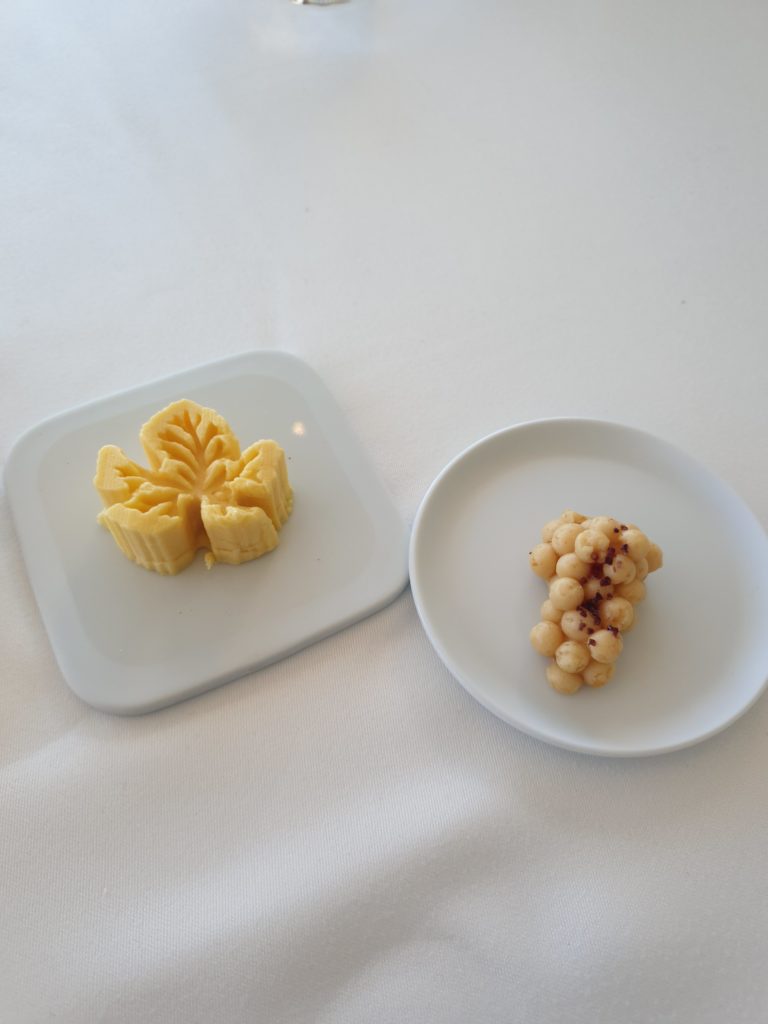 Lalique created a tempest in a wine glass when they started serving and promoting a Sauternes-based aperitif (mixed drink) they call SweetZ. Traditionalists howled and I was not particularly enthusiastic about the idea myself. But I did try it, and found it light and refreshing. If this helps to sell Sauternes, so much the better, but I still prefer my wine on its own… 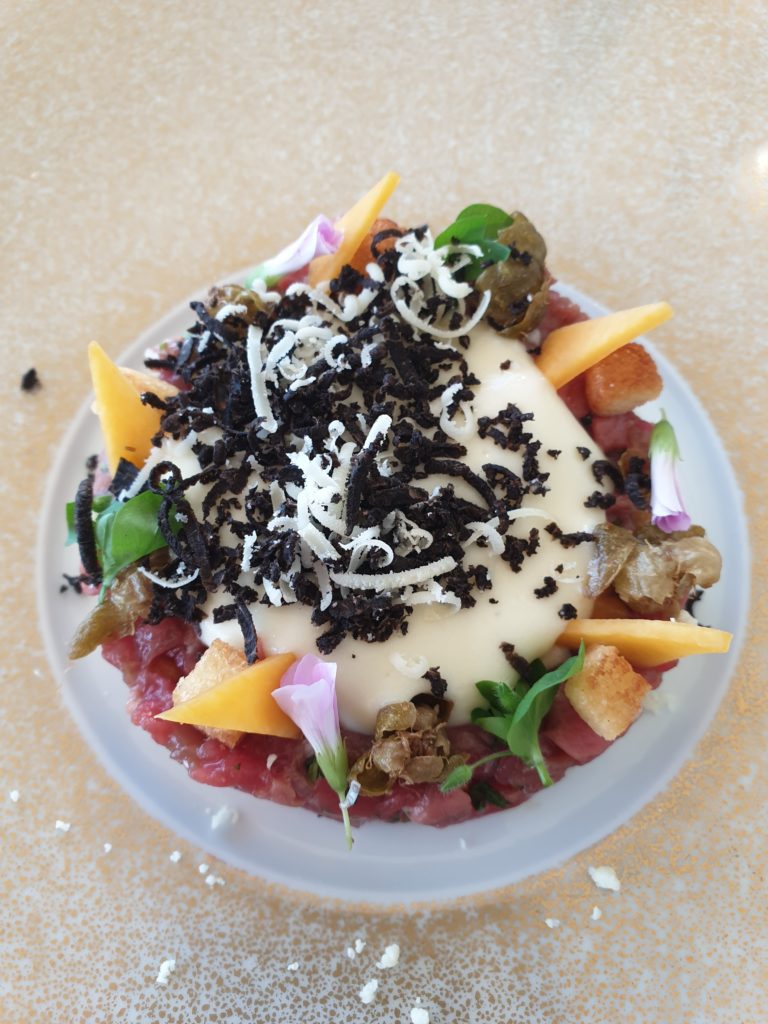 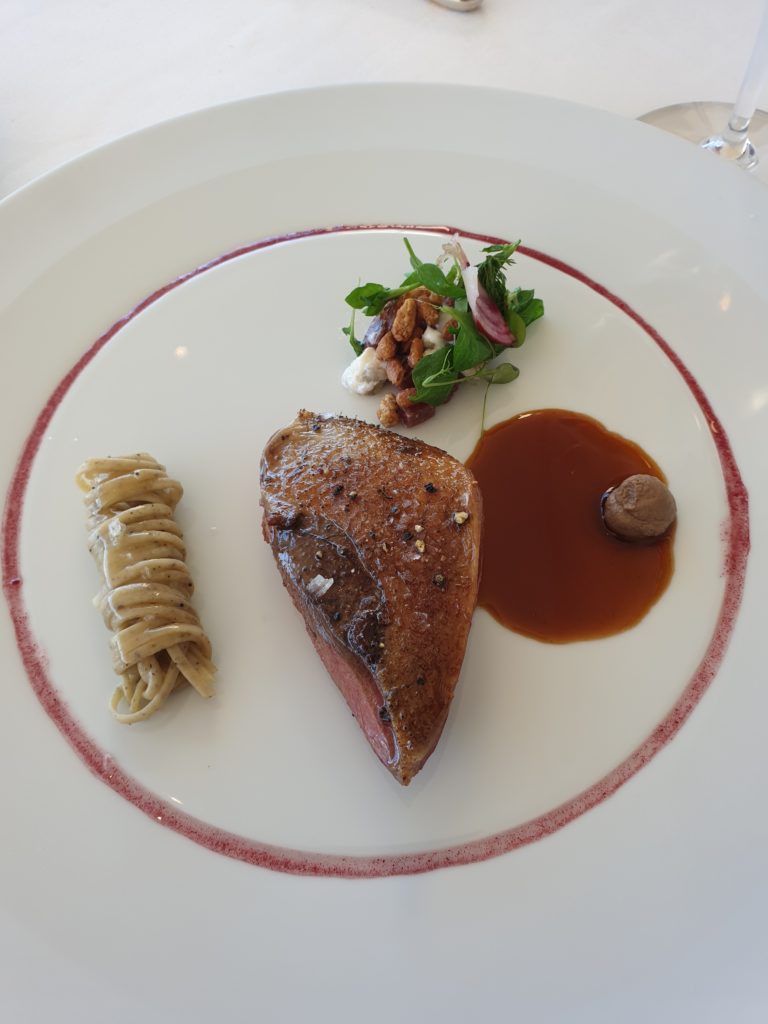 The food was very elegant and subtle, as well as attractively presented. I have only once before had a meal where only Sauternes was served and, contrary to what you might think, we did not leave the table feeling bloated or that the wines were cloying. In fact, the whole art of Lalique is to match dishes especially with Sauternes, and they succeed brilliantly. It is an uphill battle to convince English speakers that Sauternes is anything other than a dessert wine, but I’m convinced they would be won over with a meal at Lalique :-).

Service was attentive and my wife’s gluten intolerance was handled very professionally. For instance, one dish we both were served had croutons and, when this was pointed out, the waitress informed us that my wife’s were made with gluten-free bread. 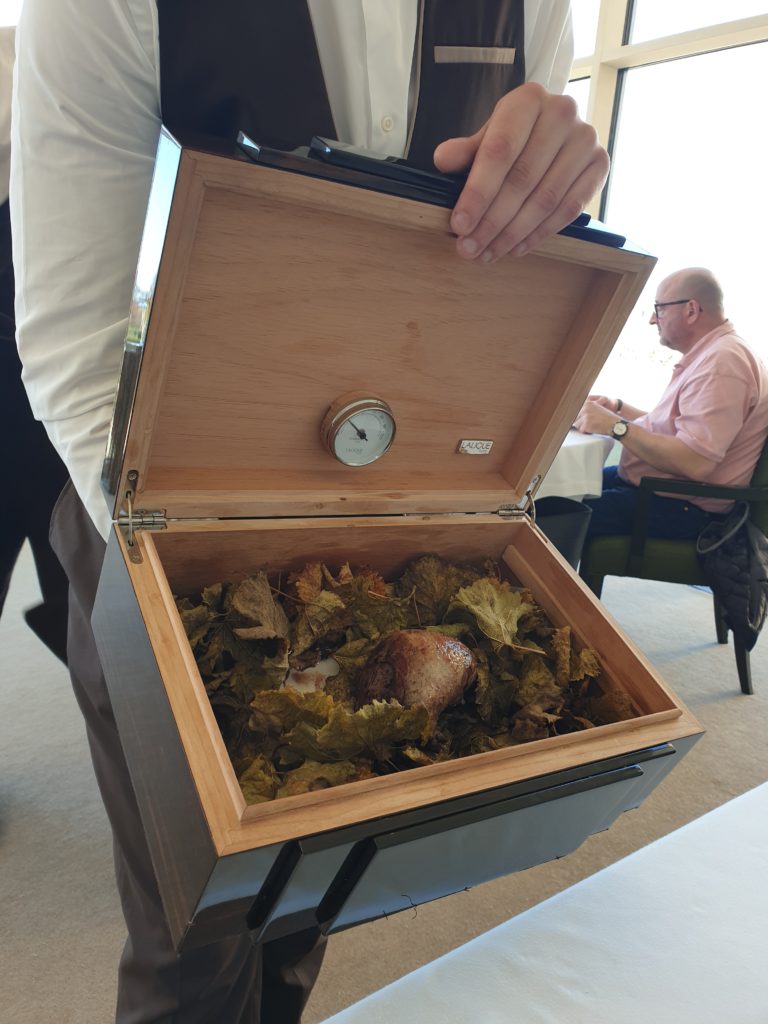 Desserts are unquestionably a challenge with Sauternes, but Lalique handles this intelligently, avoiding the trap of sweet on sweet, in our case offering fruit and a sauce that offset the sugar. 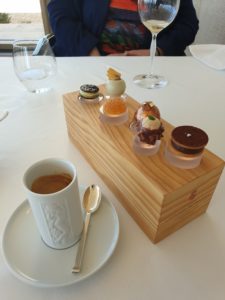 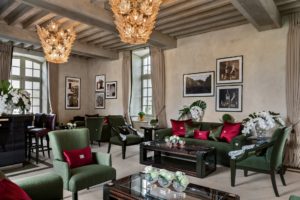 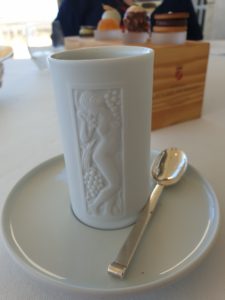 Before leaving, I enjoyed a coffee in the tastefully-decorated bar (absolutely lovely, one of the nicest I know) with the young head sommelier Adrien Cascio. We took a look at his cellar book together. At 112 pages, it is one of the most comprehensive in France. Many of the wines come from Silvio Denz’s personal cellar. Two particularities here: the in-depth representation of the greatest châteaux, with 20 or 30 vintages each, as well as a collection of the greatest wines of California.

The bottom line is that Lalique is a huge pleasure for the lover of food and wine, and a rare opportunity to see how Sauternes can shine at table.
If, like me, you abhor the idea of drinking and driving, there are two solutions: either staying at the hotel, or else taking the train from Bordeaux to Langon and then a 10-minute taxi ride from the train station to the château.