My friend Izak Litwar from Copenhagen arranged visits over two days (Oct. 10th and 11th 2018) in Pessac-Léognan and the Médoc and asked me to come along. Izak comes to Bordeaux twice a year, once during the En Primeur circus and again during the harvest. 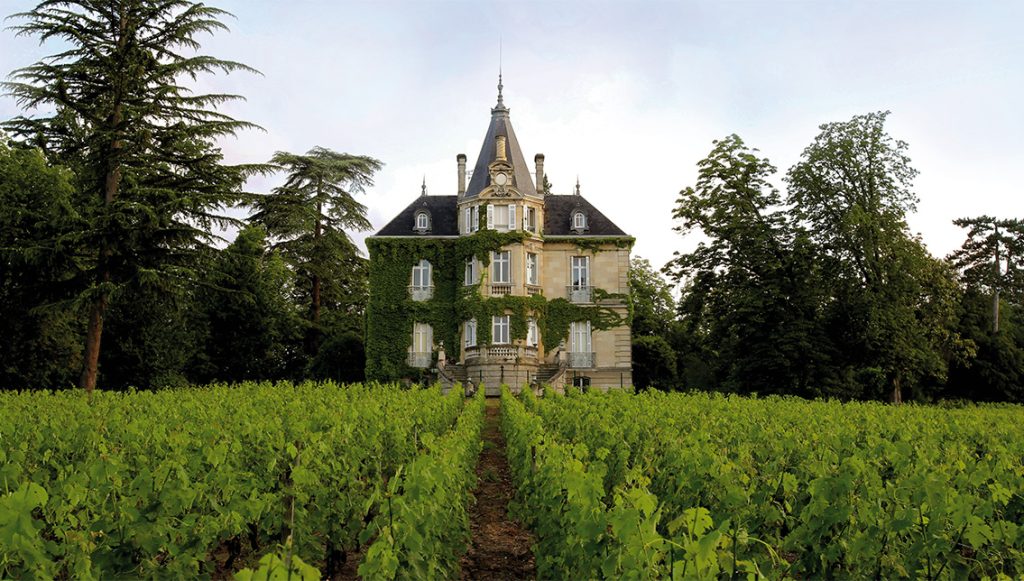 We started out with Château Les Carmes Haut Brion, a wine I once knew well since it was the exclusivity of the négociant I worked for at the time, the maison Chantecaille (in fact the Bordeaux branch of the Bichot company in Beaune). I was amazed to learn that the new owners, the Pichat family, who made their fortune in the regional construction industry, had allowed Philippe Chantecaille’s wife, Bijou, to go on living in the beautiful château. She has just turned 100! Les Carmes is a lovely small property with 5 hectares of vines surrounded by a sea of buildings (houses, offices, and the local hospital). In fact, it is the only vineyard estate with a postal address in the city of Bordeaux!
The new Carmes Haut Brion is a different animal from the one I knew. The state-of-the-art cellars and avant-garde winery building designed by Philippe Stark are put to good use by winemaker Guillaume Pouthier, who had previously worked for Chapoutier in the Rhone Valley. 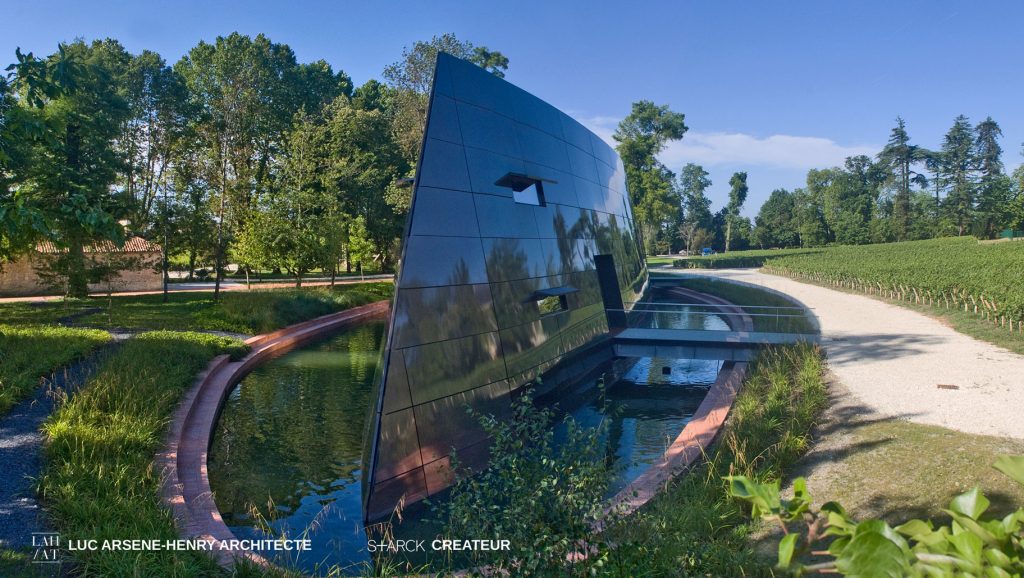 I had noticed the rise of Les Carmes Haut Brion at recent en primeur tastings, and the excellent quality was confirmed by the wines I tasted at the winery. This included the 2018, the first I have ever tasted from this vintage!
The Pichats also acquired 24 hectares of vines in Martillac, likewise in the Pessac-Léognan appellation, when the Le Thil Comte Clary vineyards were sold. However, the wine from there, Le C des Carmes Haut Brion, will always be kept separate from Les Carmes Haut Brion, since the vineyards are 15 km distant with quite different terroirs. 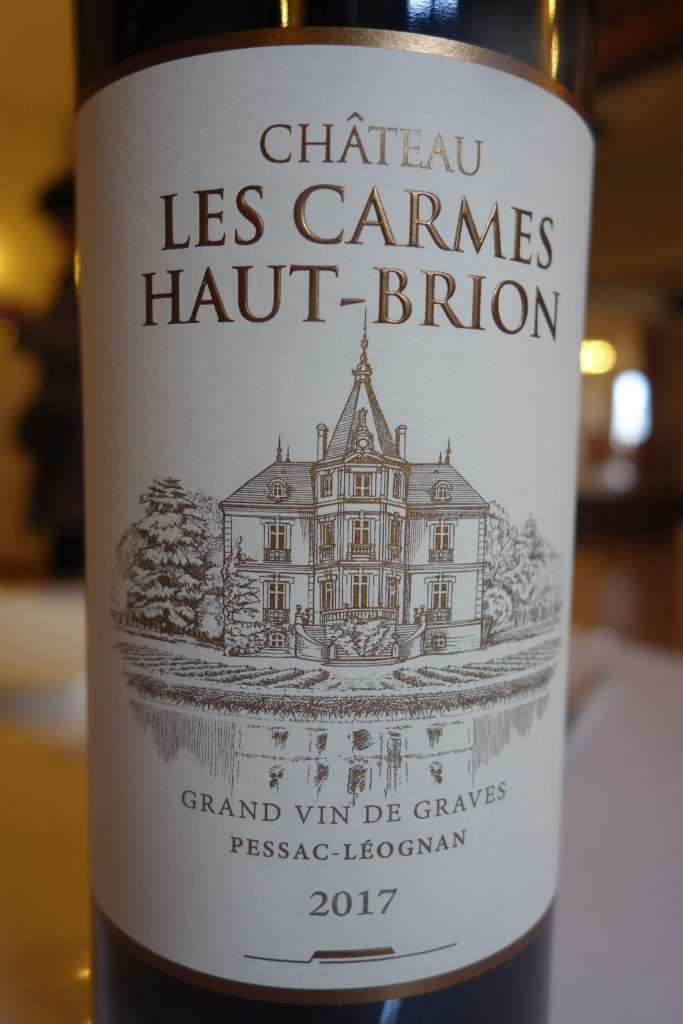 I sampled three vintages. The 2014 had a nose that was fairly oaky, a little smoky, and had (restrained) New World characteristics. It was very fresh and fruity on the palate with good acidity as well as some tar, candied black fruit, and eucalyptus nuances. Very good, and promising.
The 2015 had a developed, ethereal, somewhat floral bouquet. This was once again fresh, with good oak, a touch of smoke, and pure berry fruit. The wine was bigger on the palate than expected with fine tannin. It was also round (but with no drop on the middle palate), tangy, and with good tannic texture. Oak is present, but under control on the long, tannic aftertaste.
The 2016 was the best of the three, with a perfumed, delicate bouquet and simply lovely aromatics, including violet. The wine was extremely appealing on the palate with good follow-through and a fine acid backbone. Despite this good acidity, the wine is rounder, richer, and fuller than the previous two vintages. The tannin is also, unsurprisingly, more unyielding and I predict a great future for this wine. 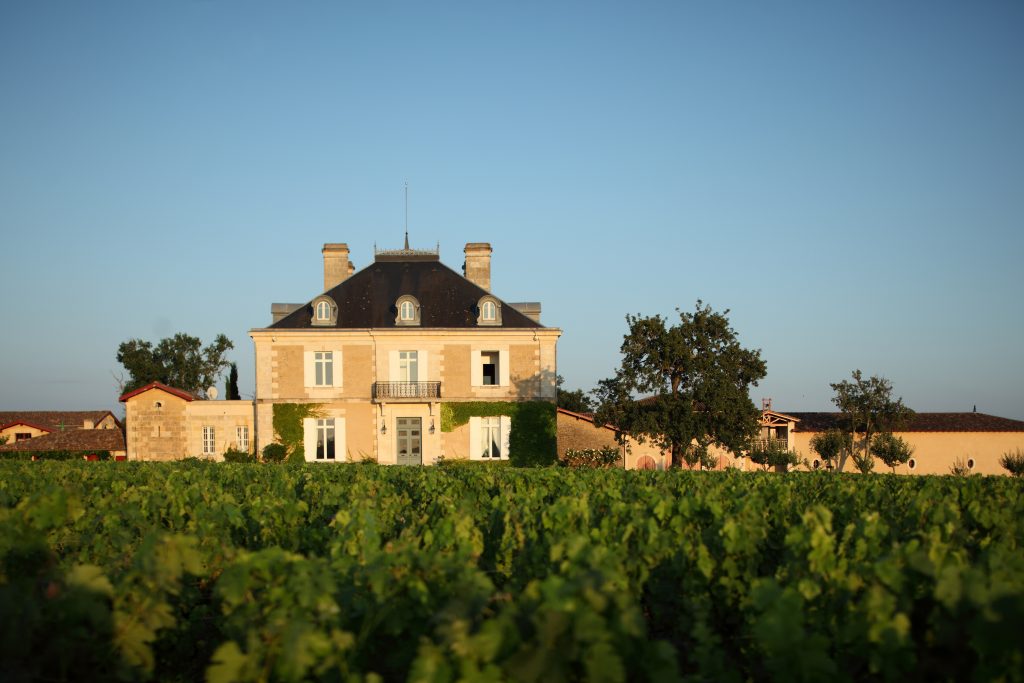 We were next welcomed by Pia Lombard at Château Haut Bailly where the traditional gerbaude (meal to mark the end of the harvest) was being prepared for the pickers. This involved, among other things, roasting two whole sheep on a spit.
Unfortunately, because of the terrible spring weather this year, the estate lost over half of an average crop due to mildew. The saving grace is that the quality of their 2018 is very encouraging at this early stage.

I’m a great fan of Haut Bailly and was not disappointed by the three vintages I sampled. 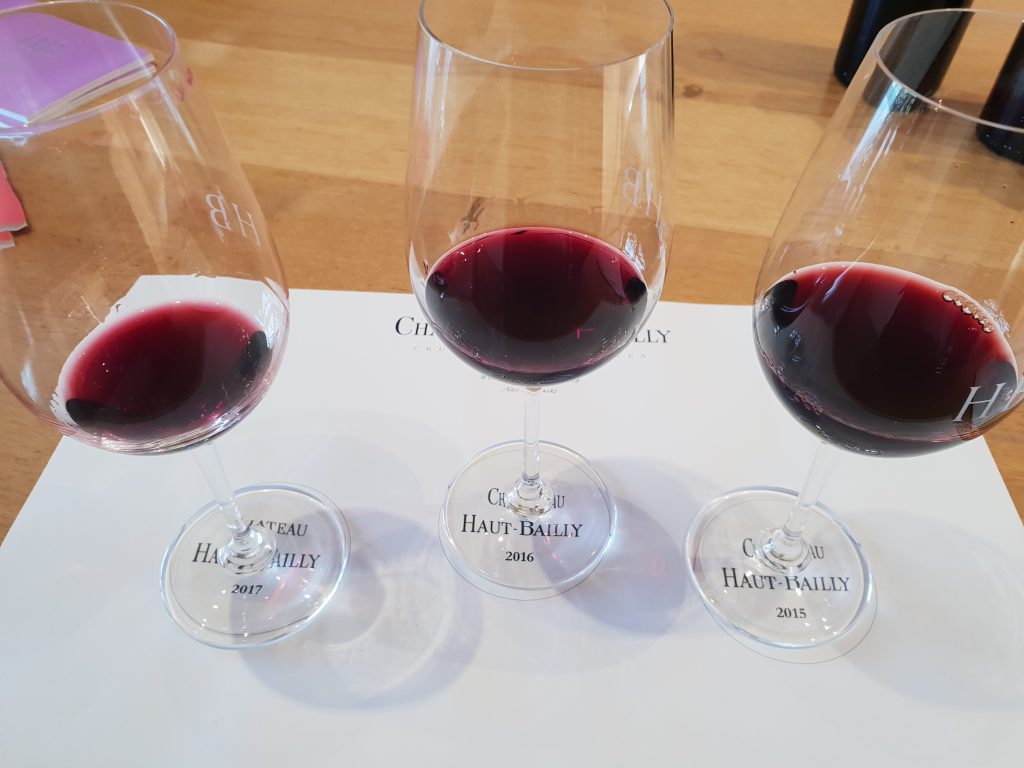 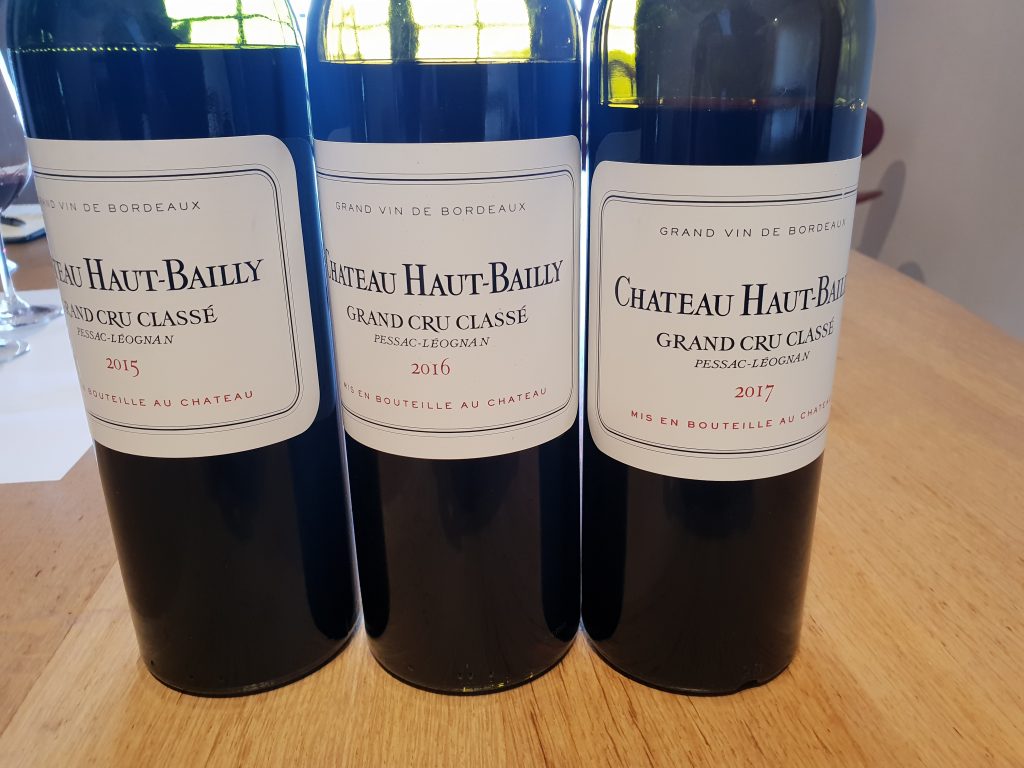 The 2017 had an ultra-classic but somewhat one-dimensional nose at the present time, with coffee-vanilla overtones. The wine was very attractive and mouthfilling, if a tad weak on the middle palate. However, it segued into a plush aftertaste with black fruit flavors, well-integrated oak, and textured tannin. Although a little on the light side, it had good balance.
The 2015 had a subtle, but not very forthcoming nose (at the present time) of cranberry. The wine was round and big on the palate with a slight dip in the middle. It had a meaty side as well as textured, grippy tannin and a medium-heavy mouth feel. It finished with up-front crowd-pleasing fruitiness on the good, lively aftertaste.
The 2016 had an attractive berry nose with some smokiness. It succeeded in being both intense and nuanced with beautiful aromatics, including violet nuances. Very promising. The wine was juicy and lipsmackingly delicious on the palate, more foursquare and longer than the Carmes Haut Brion tasted an hour earlier, and also more assertive. It featured good texture and a fine puckery aftertaste, if perhaps a touch dry on the finish at the present time. 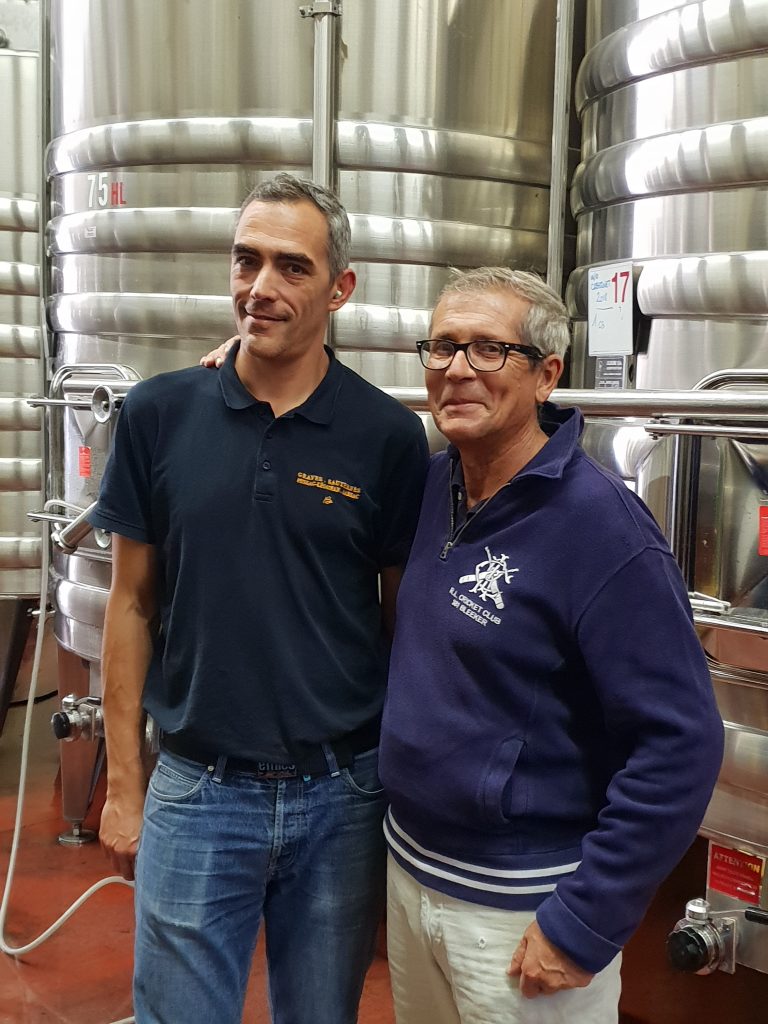 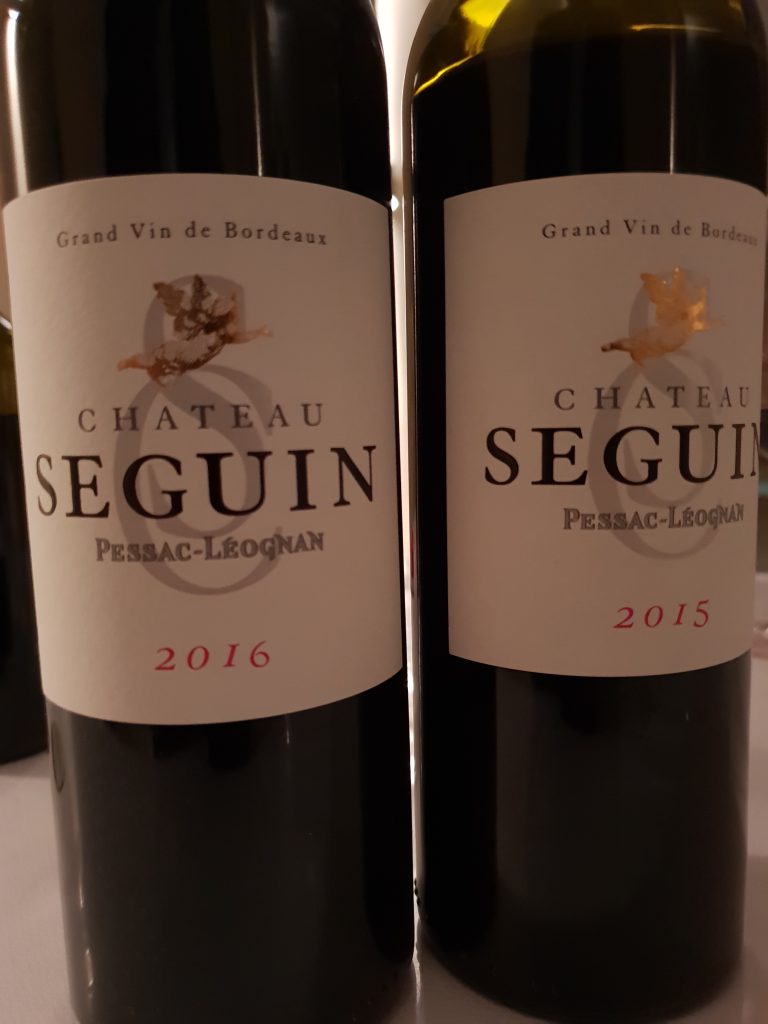 Next stop was Château Seguin in Canéjan. Owner Denis Darriet is a friend who is doing very good work making classic wines at reasonable prices. This was the third Pessac-Léognan estate in a row that produces only red wine, very much the exception rather than the rule in the appellation!
2015 Seguin had some caramel, black cherry and oaky overtones, without artifice. The wine was lovely, mouthfilling, “sweet” and with considerable finesse, approaching grand cru status. It was perhaps a tad weak on the middle palate and maybe a little short, but showed good dark fruit and a tarry quality. It will be very enjoyable even fairly young.
The 2016 displayed a wonderful Pessac-Léognan nose with hints of mint and smoke. The initial impression of sweetness on the palate followed into a smooth, velvety aftertaste with well-integrated oak on the tail end. A very fine wine indeed. I also sampled two other cuvées from the 2016 vintage: an as yet unnamed cuvée which sees longer oak ageing with a higher proportion of new barrels. This had a creamier flavor and more grip, as well as longer ageing potential. The top of the line at Seguin is “Confidences” which is made from the estate’s 3 or 4 best barrels. This proved to be of another magnitude, with enormous ageing potential. It is tightly-wound at present and needs quite a bit of time to strut its stuff.

The final visit of the day was to Domaine de Chevalier, where we were welcomed by Olivier Bernard. He was in an ebullient mood because this was the very last day of the harvest, which had been untouched by rain. As is usually the case in Bordeaux, we tasted the reds before the whites. 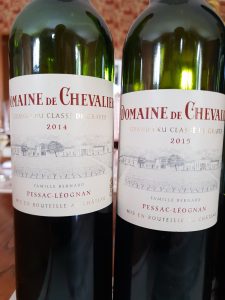 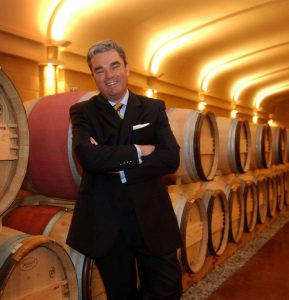 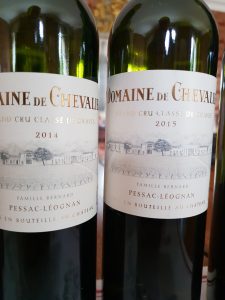 The 2016 red has just been bottled. It showed fresh, well-focused, chocolate and black fruit (blackcurrant) aromas. The wine was full and very juicy with good acidity and a delicious aftertaste. It melted in the mouth and displayed really good balance. This proved to be a very drinkable wine rather than any sort of blockbuster. The oak comes through as it should, and no more.
2015 Domaine de Chevalier had some incense aromas along with perky red and black fruit that was not particularly complex at this stage. The wine was medium-heavy on the palate with strong tannin that coated the teeth with going-on-sharp acidity. The incense quality on the nose carried over to the palate. This seemed like a little bit of a bruiser for Chevalier.
2014 Chevalier had a stupendous color with a brambly black fruit jelly nose, along with cherry and leather nuances. This will surely become more complex over time. The wine was attractive and plush on the palate with tremendous cherry flavors. Although a little facile, it was round and showing extremely well even this young. Tremendously well-made with a fine textured aftertaste.
Then it was on to the whites.
2016 Domaine de Chevalier had a very Sauvignon Blanc nose that is quite primary at present. It was round on the palate and the wine’s intrinsic class came through on the finish.
Sémillon showed through more on the nose of the 2015, a wine that was quite delicious, pure, and mineral with understated pear and tropical fruit flavors. Great finish.
The 2014 white wine from Domaine de Chevalier featured enchanting beeswax aromas as part of a very complex bouquet. The wine was incredibly smooth and long on the palate. Simply a great wine.