Bordeaux may be a provincial city, but it is a tremendously cosmopolitan one, and wine lovers from all over the world always end up here one way or another. Dinner at my house on Saturday included people from several continents. The lingua franca was English. 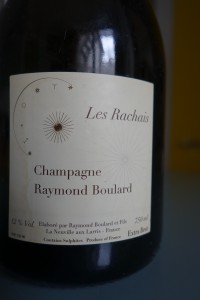 We started off with a fine Champagne. Francis Boulard has many fans and his Les Rachais is arguably the top of the range. The 100% Chardonnay vines are grown organically and are an average age of 43 years old. Les Rachais is a “brut nature” with zero residual sugar. The wine is aged in barrel, undergoes malolactic fermentation, and is neither fined nor filtered. It is much appreciated and well noted in France. For what it’s worth, I see that it has received a score of 93+ from Parker.
We found the wine bone dry but gracious and ethereal. A great aperitif.

Foie gras and toast usually means Sauternes in Bordeaux, but I figured a full, rich white Burgundy from a very ripe year should also marry very well.
I might add that trade professionals in Bordeaux freely acknowledge that the great white wines of Burgundy are among the best in the world. 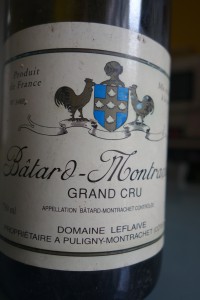 Bâtard-Montrachet is a grand cru with about 12 hectares of vines (Le Montrachet and Chevalier-Montrachet each have 8 hectares, Bienvenues-Bâtard-Montachet has 3.7 hectares, and Criots-Bâtard-Montrachet has 1.6 hectares).
Leflaive is by far the largest owner of vines in Bâtard-Montrachet (a quarter of the vineyard) and the domaine has a stellar reputation.
Jasper Morris in his book “Inside Burgundy” writes that Bâtard reflects “weight and power rather than vibrancy and elegance”.
After this lengthy explanation I’m sad to report that despite the reputation of the vineyard and the producer, this was not a memorable wine. It was not prematurely oxidized or corked, just blah, neutral and flabby. When you consider the price, this is very disappointing.
It must be due to the vintage. 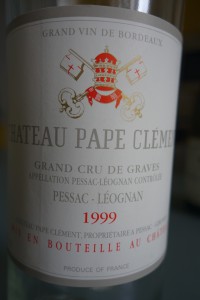 Fortunately, Ian and Maureen had contributed a rare white 99 Château Pape Clément which saved the day. This was pretty much the polar opposite of the Bâtard: light gold in color, with a zippy nose and vibrant acidity to match the richness. People often think of Bernard Magrez’s wines as being a little overdone. This was not at all the case here. The wine shone and went well with the foie gras. It also has years of life ahead of it.
The main course was milk-fed lamb, accompanied by 3 red wines. 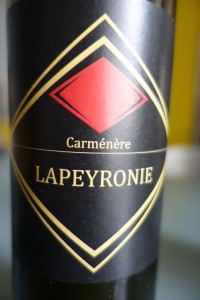 The first one was a fun, rather than a serious wine: a 100% varietal Carménère from the Côtes de Castillon that I mentioned in an earlier post about a visit to that appellation.
Carménère is genetically related to Cabernet Sauvignon, Cabernet Franc, Merlot, and Sauvignon Blanc. This variety was extremely widespread in Bordeaux in the 19th century, but when the vines were grafted they produced less and were also much more subject to coulure. So, Carménère all but disappeared in Bordeaux. However, it is making a modest comeback in the Libourne region.
Our 2012 Carménère came from Château Lapeyronie the Côtes de Castillon. The wine was a little sharp, but it’s always fun to taste oddball wines like this, as well as instructive to get a handle on varietal character. This Lapeyronie was great as an introductory wine, but no one is expected to take it seriously in the Bordeaux hierarchy. 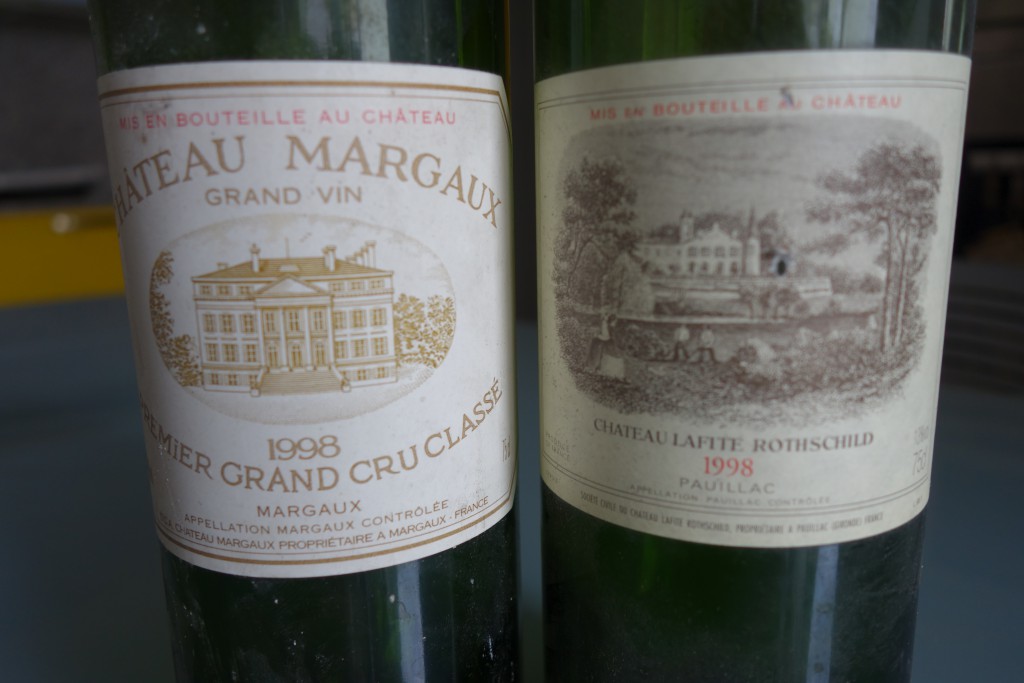 Received wisdom is that 1998 Right Bank wines are wonderful and that Left Banks ones are much less so… Parker’s vintage chart gives the former a full ten points higher! Less damning, Jancis Robinson, notes “Very good on the Right Bank but a less starry performance in the Médoc, whose 1998s are a bit stolid, means that these wines, and their equally successful counterparts in Graves have tended to be overlooked”.
Féret says that “the 1998 red wines are balanced, powerful, and generous” but that “Merlot-based wines are better than Cabernet-based ones”.
Well, Lafite and Margaux are poster children for Cabernet: 70% for the former and 75% for the latter. What would their 1998s taste like 18 years down the line?

The wines were served blind. Margaux was fairly evolved with earthy, musky aromas and mostly resolved tannins. There was some dryness on the finish. Lafite was clearly the more enjoyable of the two. In color, bouquet, and flavour it was pure and zippy, with much life ahead of it. A joy.
The tasting notes are a little skimpy, but you know how it is when you are the host… 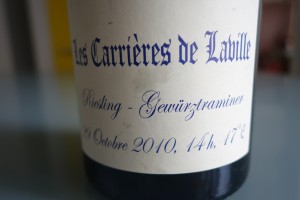 As for the last wine, I wrote in a blog post last year: “Ch. Laville in Preignac (AOC Sauternes) produces a late harvest Riesling-Gewurtztraminer blend! Of course, this is not entitled to the appellation, but not only is it very rare – dare I say, a unicorn wine? – but also quite delectable, with the zippiness and spiciness of its two main components. It will be an excellent one to serve blind one day when I am feeling particularly sadistic…”
Well, friends, that day had arrived, and the wine was indeed served blind at the end of the meal.
Of course, hell would freeze over before anyone nailed this! But everyone loved it. There were candied fruit flavors of apricot and other white fruits and somehow it seemed more like a late harvest than a botrytized wine. But above and beyond it’s oddball quality, the wine was also very tasty. 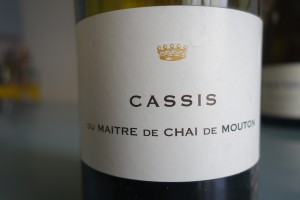 We ended the meal with a glass of Crème de Cassis from Mouton Rothschild. This seemed not very alcoholic (16-18°) and everyone enjoyed the sweet concentrated flavors.