A simple, but delicious dinner tonight.
With smoked Norweigan salmon, we had a 2012 Villa Bel Air (Graves Blanc). This 50-hectare estate in Saint-Morillon has been part of the Jean-Michel Cazes stable since 1988. The white wine is made from 65% Sauvignon Blanc and 35% Sémillon. The former variety dominates the flavor profile. The wine is zippy and definitely shines more with food than as something to sip on its own.
With a cut of beef called “hampe” (my dictionaries translate this as “thin skirt steak”) I opened a 2004 Château Berliquet. This 9-hectare Saint Emilion grand cru classé is on the Magdeleine plateau near the village. Grape varieties are 70% Merlot 25% Cabernet-Franc, and 5% Cabernet-Sauvignon. I decanted the wine for 2 hours before serving. It had quite a brown rim and looked older than its years. The nose showed prune and leather, but lacked freshness and focus. It was very old-fashioned in style on the palate with tannin reminiscent of over-brewed tea. The overall impression was of a prematurely aged wine that should have been opened years ago. I just hope that this bottle is not representative. 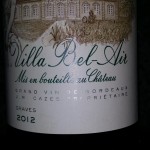 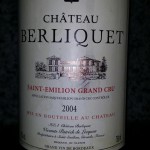 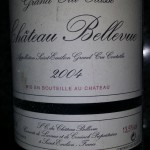 I bought a decanter of 2004 Ch. Bellevue, another Saint-Emilion grand cru classé, to the table with the cheese platter. I was very intrigued by this wine because I think I’ve only ever had it once before (in any vintage) and also because of its location just across the road from Château Angélus. In fact, a 50% shareholding was bought by the de Boüard de Laforest family (owners of Angélus) in 2007. The other half belongs to the Pradel de Lavaux family. I can remember seeing the ambitious earthmoving and drainage operations going on shortly thereafter and thinking: with that location and the Angélus promotional machine behind it, Bellevue will undoubtedly be going places soon.
The bottle I opened was prior to the de Boüard involvement, but it was a very pleasant surprise, especially in light of some disappointing 2004s I’ve had lately. The color was very deep and slightly purplish but, even so, looking older than its age. The nose was a little dusty, but showed plum, violet, subtle jam, and slightly cosmetic overtones. The wine was delicious on the palate with plenty of volume. In fact, you might even call it brawny. At 13.5% alc./vol. there was nothing exaggerated here, just powerful. There was good, grippy tannin with a coarse-grained texture. The candied cherry/cherry lozenge flavours were very attractive. There were mouth-coating tannins on the tail end and the wine was dry, but not dried out. It is 3-5 years away from its peak.
A very nice discovery. If I had to rate it, I’d give it 15/20, and I’m a tough scorer…