Sometimes, you just want to scream!

No, no, and no!
Enough already!

A trip to the Côtes de Bourg disproves all of the above.
It’s true that there are countries where these wines are virtually unable to be found (only 15% of production is exported). This creates a vicious circle: they aren’t imported and distributed because they are not known. And they are not known because they aren’t imported and distributed…
The wine media? It seems somehow more sexy to crow about a Côtes de Lubéron or a Cour-Cheverny or a Jura than a Bordeaux – and that’s just the French wines!
Then there’s this feeling that Bordeaux is a known quantity with not much left to discover, with nothing new happening.
Nonsense!
Oh, journalists do come to Bordeaux in droves alright during en primeur time. And what do they taste? The great growths. Period. Or just about… In their defense, it takes a least a full week of constant tasting to sample most of the famous wines. And then it’s time to go back home.
Far too few critics make the effort to poke around and discover the good affordable wines of Bordeaux.

Yes, it does take poking around, and a lot of trial and error. Admittedly, quality is uneven, but the rewards are well-worth the trouble! The Côtes wines of Bordeaux represent excellent value for money. No doubt about it. 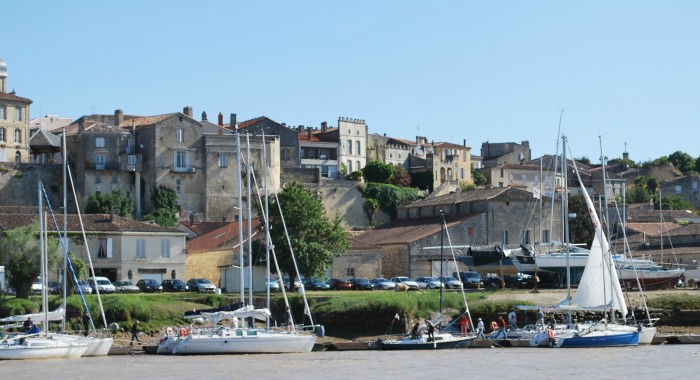 The town of Bourg, and center of the appellation, is 35 km. from Bordeaux. Its full name is Bourg-sur-Gironde but here’s a factoid for you: the estuary changed course over the years, and the town is actually on the Dordogne!
The narrow 10 km. corniche road (D660) from Bourg to Villeneuve running between the estuary and a cliff face dotted with troglodyte dwellings is not to be missed. This is lined with lovely houses whose owners pride themselves on their flower gardens – a riot of color this time of year!
Bourg is a charming little town, with its own small port, a citadel, and a great Maison du Vin where they just opened a beautiful modern extension with a lovely large tasting room overlooking the river. There is also an attractive boutique with a dizzying selection of wines. The prices are awfully seductive, and the knowledgeable staff are glad to make suggestions. This is just as well because even a hard-bitten Bordeaux fanatic such as me is pretty much at a loss to recognize most of the labels here.

With a near-Texan sense of exaggeration, this part of Bordeaux is called “la Suisse Girondine”. While hardly Alpine, the vine-covered countryside is indeed very hilly. The Côtes de Bourg have about 4,000 hectares of vineyards. Merlot reigns supreme, but as opposed to all other parts of Bordeaux, Malbec is widely planted, and its share is growing.
Students of Bordeaux all learn that the Cabernet on the Right Bank is Cab Franc. But not so in Bourg: it is far outweighed by Cabernet Sauvignon because of the later-ripening terroir, approximately two weeks after Saint-Emilion. 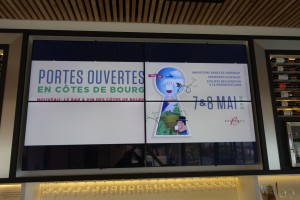 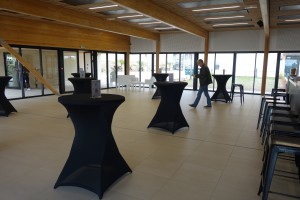 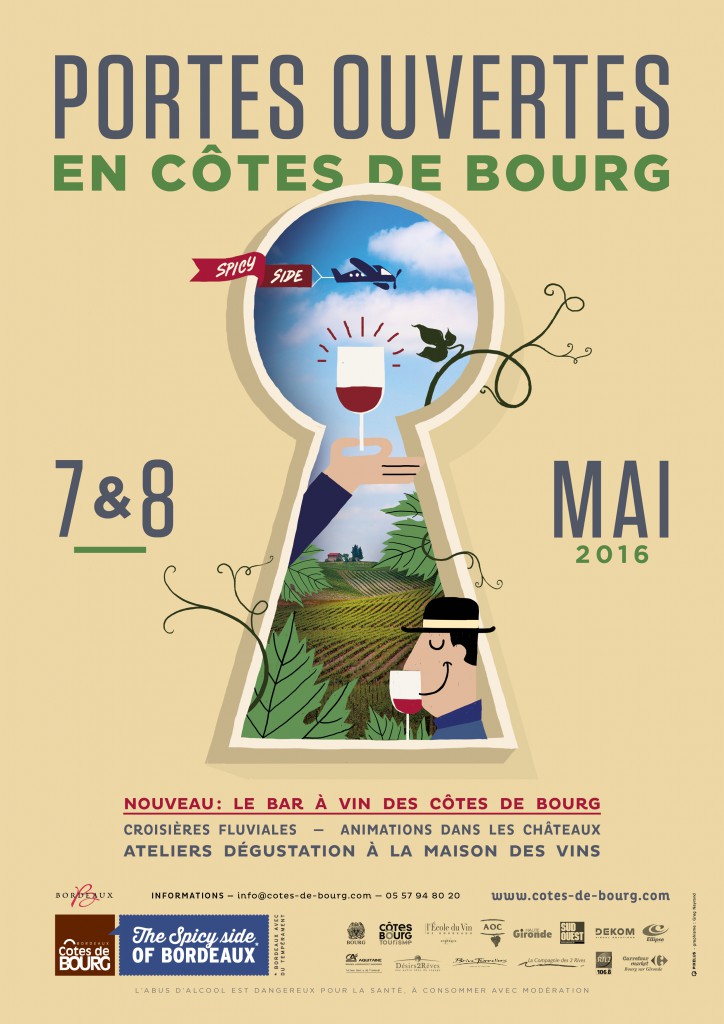 I decide to take advantage of the Portes Ouvertes to visit the Côtes de Bourg appellation and their renovated Maison du Vin on the 7th of May. A friend and I stopped in at 9 châteaux and here’s a not-so-brief rundown of our experience. 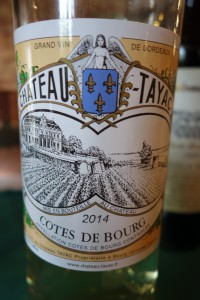 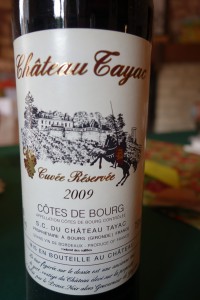 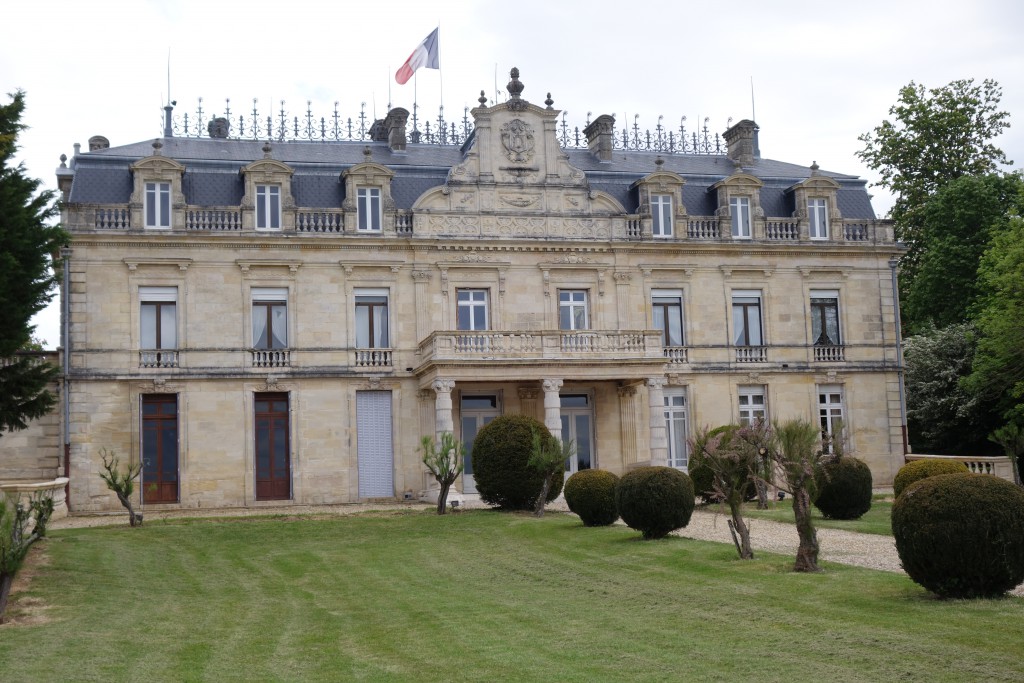 We first went to Château Tayac in Saint-Seurin-de-Bourg. Overlooking the confluence of the Dordogne and the Garonne at the Bec d’Ambès, this estate has a very long history and an impressive château to prove it. This was built on the site of previous ones in 1827. Tayac is also famous for a rare mutation of Merlot called à queue rouge (with a red stem). Vieux Château Certan in Pomerol has planted cuttings.  We tried two vintages of the red wine (43% Cabernet Sauvignon, 26% Merlot Noir, 25% Merlot à Queue Rouge, 5% Cabernet Franc, and 1% Malbec – planted on 26 hectares). The 2013 was fresh, easy-going, and intelligently made i.e. not over-extracted in that difficult vintage. The 2009 Cuvée Réserve had a lovely, perfumed, uplifting bouquet, but the palate was not quite up to this. Short, but interesting, it was a little rustic. However, there was plenty of grip and this wine may surprise us with age. We also tasted the 2014 white Tayac (60% Sauvignon Blanc, 25% Sémillon, and 15% Muscadelle on two hectares). In fact, we tasted several white Côtes de Bourg on our day out, but this may give a wrong impression. These wines account for just a minuscule share of production. Anyway, the 2014 Tayac was very pale with silvery highlights and a nose clearly marked not only by Sauvignon Blanc, but also the high proportion of Muscadelle. The wine was light and thrist-quenching. I left with a couple of bottles at 7.20 € apiece. 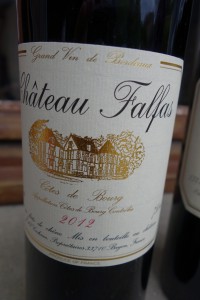 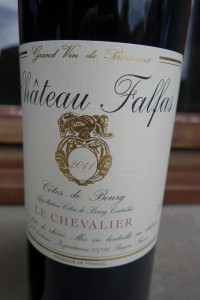 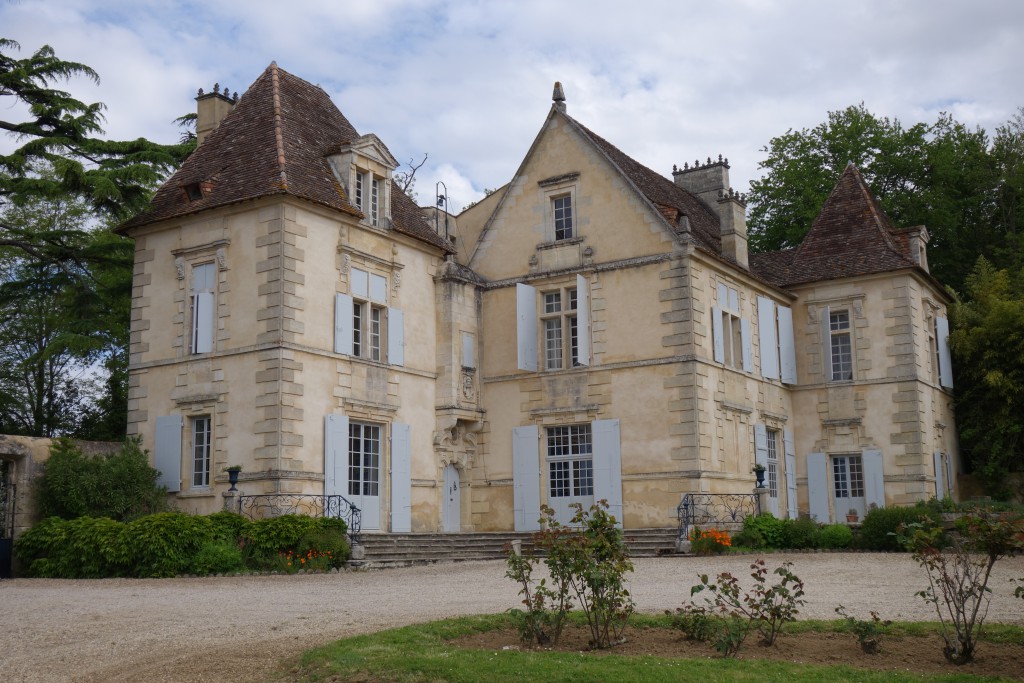 Our next stop was Château Falfas in Bayon-sur-Gironde (20 hectares of vines – 55% Merlot, 30% Cabernet Sauvignon, 10% Cabernet Franc, and 5% Malbec). The 17th century château is a listed historic monument. We were welcomed by the owner, Madame Véronique Cochran. This charming, soft-spoken woman has an enormous and infectious faith in biodynamic winegrowing. We tasted red wines: the 2011 and 2012 regular cuvée as well as the 2008 and 2011 prestige cuvée, “Le Chevalier”. The former cost about 15 euros a bottle. The common thread here was pure black fruit aromatics and a significant oak influence. These are wines to age. 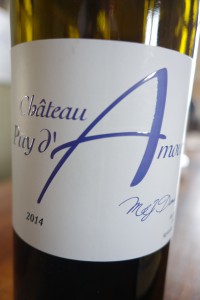 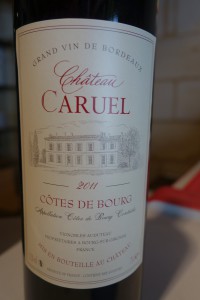 After Falfas, we went to Château Puy d’Amour in Tauriac with 12 hectares of vines. Puits means “a well” in English, and puits d’amour is the name of a local patisserie… But the name puy here means a small, flat-topped hill where the grapes grow. The wines were inexpensive, but really nothing special.

Next up was Château Caruel in Bourg with 18 hectares of vines (55% Merlot, 20% Cabernet Sauvignon, 15% Malbec, and 10% Cabernet Franc). We were welcomed by Thierry Auduteau, a salt-of-the earth kind of guy who served us his 2011 cuvée traditionelle and his prestige cuvée Ballade from the same vintage.  The former was everything one would hope for from an inexpensive Bordeaux (6.20 euros a bottle), with a simple but attractive raspberry nose and a good long finish.  I was very happy to taste this. The latter wine (8.70 euros a bottle) was soft with well-integrated oak. Tremendous value for money. A 2000 Caruel had dried out and was past it. But age-worthiness is not the be-all and end-all of wine quality. For inexpensive mid-range drinking, Caruel is clearly a winner. 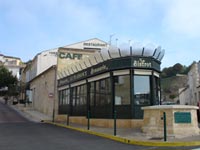 We stopped for lunch at La Plaisance http://www.restaurant-le-plaisance.com/ near the port in Bourg. This bistro-type restaurant claims they offer the widest choice of wines by the glass (3, 6, and 12 cl.) of any restaurant in France. They even serve, gasp, foreign wines: Tuscany, Argentina, California, etc.! The cuisine is basic and enjoyable. In fact, following the example of the local wines, there are no top-flight restaurants in the Bourg region, but there are certainly several good ones such as La Plaisance that won’t break the bank. 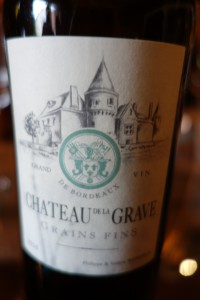 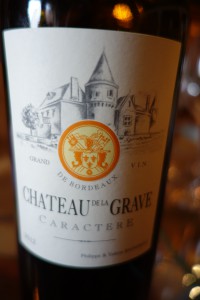 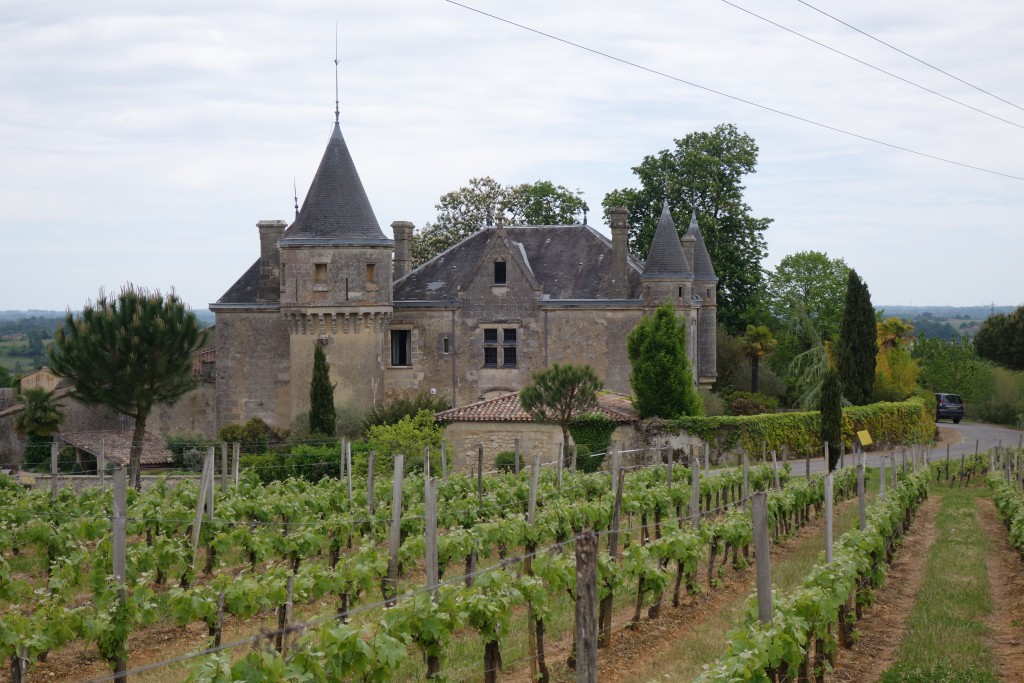 Our first visit after lunch was to Château de la Grave, also in Bourg. This largish estate has a beautiful 16th century castle restored in the Louis the 13th style in the 19th century. I have always liked their wines and was not disappointed with the ones I tasted. La Grave is the largest producer of white Bourg, with nearly 5 hectares of white wine varieties: 70% Sémillon and 30% Colombard. At 10.50 € a bottle, their 2014 white was not only rare, but good. It had a brilliant pale golden colour and a sweetish, gooseberry, spicy nose with some waxy overtones. The wine was once again spicy on the palate and very attractive. Selling at 8.50 € a bottle, the 2014 red Château de la Grave (37 hectares – 80% Merlot, 20% Cabernet Sauvignon) featured a vibrant purplish color as well as a vinous and lead pencil bouquet. It was chewy on the palate with good acidity and was not too tannic. A good wine at an unbeatable price in light of its quality. We also tried the 2012 “Cuvée Caractère” which had a fairly bright medium deep colour with a purple rim. The After Eight nose led up to a delicious flavor typical of its appellation, with well-integrated oak (barrels used for 2 previous vintages). Once again, a bargain at 10.50 € a bottle. I ended up buying some top-notch Crémant de Bordeaux Rosé, for under 10 € a bottle.
Château de la Grave also do bed and breakfast. I don’t know the owners, so am not doing anyone a favor by saying that this château is in a dream location and would make a very nice place to stay. Rates are approximately 100 euros a night for a couple, breakfast included. 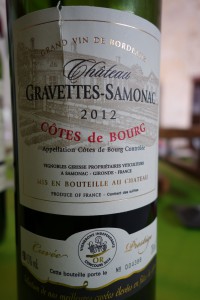 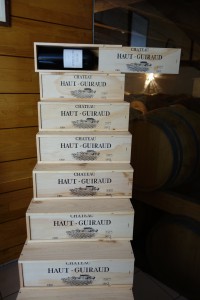 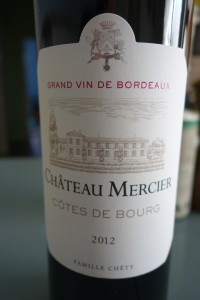 Next on the itinerary was Château Gravettes-Samonac in Samonac. They have 27 hectares of vines (75% Merlot, 10% Cabernet Sauvignon, 10% Cabernet Franc, and 5% Malbec). We tasted three wines from the 2012 vintage: the Tradition (5.40 € a bottle), Elégance (6.00 € a bottle), and Prestige (8.00 € a bottle) blends. This is a respected and well-known estate. My notes refer to soft wines that vary little from one cuvée to the next other than the degree of toasty oak. The wines are dependable, if unexciting. 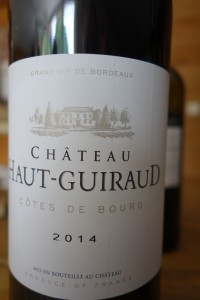 The next-to-last visit was to Château Haut-Guiraud in Saint-Ciers de Canesse, an estate with 16 hectares of vines (80% Merlot and 20% Cabernet Sauvignon). We were greeted by Christophe Bonnet and tasted through three wines. The 2011 Ch. Coufin du Périer is a 100% Merlot aged in 100% new oak. This tiny 1.5 hectare estate is owned by M. Bonnet’s wife. Although non-giving on the nose, it was better on the palate: a simple, fun, sensual wine with a certain amount of character. We then test drove the 2014 Haut-Guiraud (7.00 € a bottle). This had a very suave bouquet and was quite fine on the palate as well, with a good long aftertaste. What’s not to like? In fact, I preferred it to the prestige cuvée, Péché de Roy (or “The King’s Weakness”) at 9.70 € a bottle – which, like many prestige cuvées, is notable more for its increased oakiness than anything else. However, once again, the wine is young and there is a chance that this may become better integrated.

Our final stop was at Château Brulesécaille in Tauriac. This has always been one of the leading estates in Bourg going back centuries, so this was a fitting way to end the day. We sampled the 2014 white wine (100% Sauvignon Blanc – 2 hectares) which had a pale golden color and a rather neutral nose. It was more expressive on the palate, but rather austere, definitely one calling for food. This cost 9 € a bottle. We then compared two red wines (55% Merlot, 30% Cabernet Sauvignon, 10% Cabernet Franc, and 5% Malbec – 28 hectares) from the 2012 vintage. The second wine, named Château La Gravière, costing 8 € a bottle, was a rather old-fashioned sort of Bordeaux, but pleasant enough. The Brulesécaille was more vibrant in every way, with well-integrated oak and a little gumminess/tarriness on the aftertaste. A very good wine at 11 €  a bottle.
For summer drinking, I came away with a few bottles of the pale, fresh, fruity Bordeaux rosé at 6.50 € a bottle. The Rodet-Recapet family of Brulesécaille also own a 2-hectare vineyard in Saint-Emilion, Château Yon Saint Christophe (85% Merlot and 15% Malbec) bordering on the Saint-Georges-Saint-Emilion appellation. I found their 2011 to be excellent and was not surprised to see that the 2013 vintage had won a gold medal at the Paris International Agricultural Show.

On the way back home we stopped in the nearby city of Saint-André-de-Cubzac for a cool, non-alcoholic drink at the Café de la Gare https://www.tripadvisor.fr/Restaurant_Review-g1939251-d5808947-Reviews-Cafe_de_la_Gare_1900-Saint_Andre_De_Cubzac_Gironde_Aquitaine.html
This is also a good place to eat and very wine-friendly.