Goulée is a wine from the Northern Médoc (AOC Médoc), near Port de Goulée and the commune of Jau-Dignac et Loirac. The vineyard has gravelly soil and overlooks the Gironde estuary.

It is made by the team from Cos d’Estournel. The first vintage was 2004 and later ones say “Goulée by Cos d’Estournel” instead of just “Goulée”. It is interesting that the owner, M. Michel Reybier decided to market a brand rather than a château name.

Goulée is moderately expensive for its appellation but, of course, cost much less its more southerly neighbors. Is it worth the money? I have had the wine en primeur and found it to be OK, but this was the first mature example I have ever tasted. 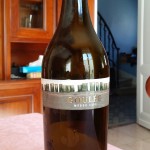 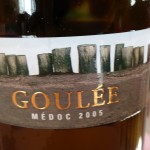 The color was very deep, with thick legs. It is begining to brick on the rim and looks a little older than its age. There was sediment in the bottle which is often the good sign of a natural wine to me.
The nose showed rich plummy and mint aromas as well as classic overtones of blackcurrant and lead. The wine is very Médoc on the palate with deep and slightly spirity flavors. The Goulée website says that “the climate gives Goulée a fruity character that is somewhat reminiscent of New World wines,” but I don’t really see that… This 2005 is medium-bodied with a shortish aftertaste. It is a little dry on the finish, but has decent grip. Verdict: a good wine, in its drinking window, and a brand worth investigating.