My friends Ian Amstadt and Maureen Keer came to visit from London (put their car on the Eurostar and drove down to Bordeaux).
Sharing the same love of fine wine, we wasted no time in getting down to brass tacks… 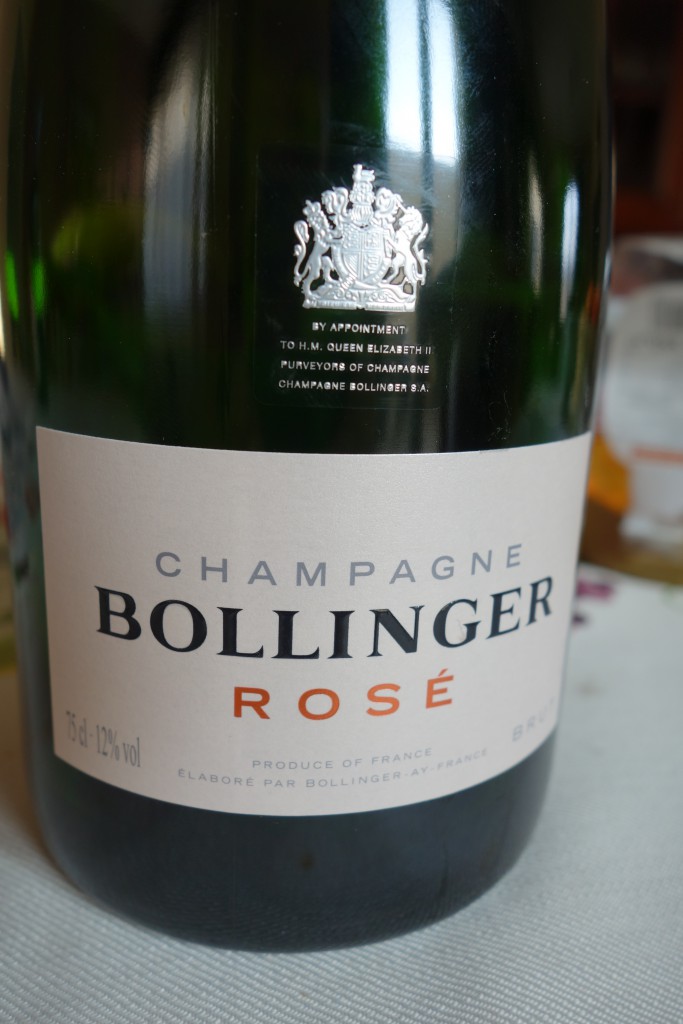 Having enjoyed Mumm Rosé just a few days ago, I thought it would be nice to open a Bollinger Rosé. The story here is that the négociant Millésima had a tasting with 27 Champagne producers not long ago with such houses as Krug, Dom Pérignon, etc. I went there with my wife who, realizing that it was impossible to taste everything, thought she would focus on rosé and nothing else. Tasting all evening, she found Bolly to be best.
As much as I liked the Mumm, the Bollinger was more suave and subtle. A really elegant drink and a great aperitif. 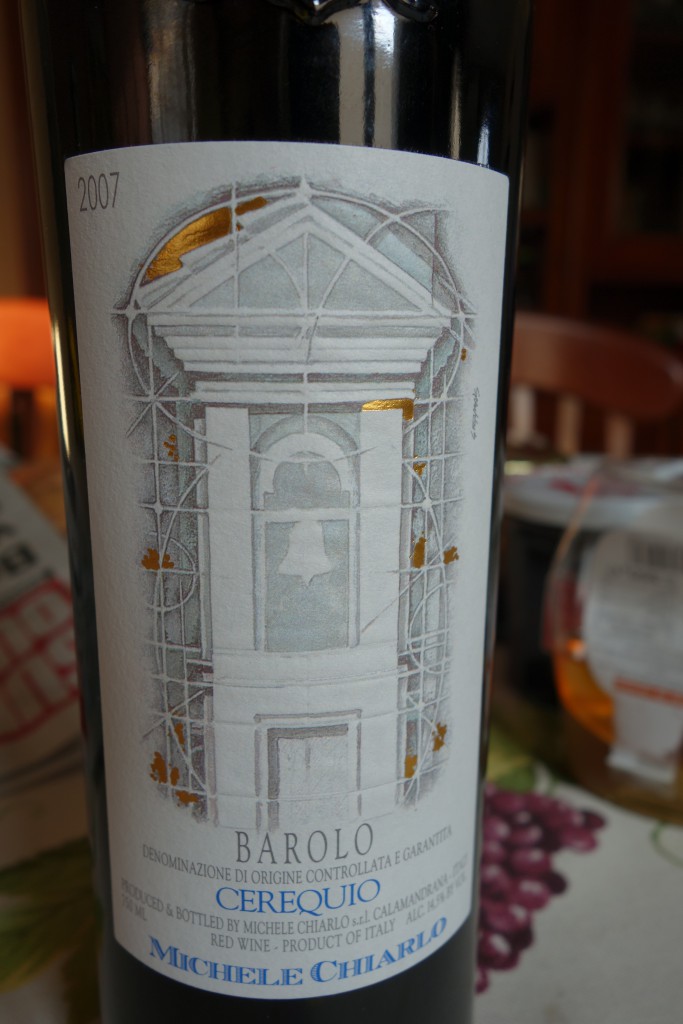 Ian had opened a bottle of wine the day before and not finished it. So used his Vacuvin, brought it with him, and we tasted it with a platter of delicatessen meats.
I enjoyed the 2007 Barolo “Cerequio” from Michele Chiarlo, but am unfamiliar with the category, so my comments are not very knowledgeable. This 9 year-old wine had a lovely, still quite purple color and an intriguing subtle, smoky nose of sour cherry. The wine was big (14.5% alcohol) and a little raisiny, but had an attractive tartness that makes these wines go so well with food.

Aside: Wine lovers are inevitably food lovers. And some of the world’s best foods are the simplest (foie gras, truffles, oysters, certain cheeses, etc.). The right kind of free range chicken slowly roasted is in this category. Not to put too fine a point on it, chicken frequently sucks in the US, UK, and other countries, where it is a mass produced product with little flavor. God bless France, where roast chicken can be delightful, and suitable to just about any wine on earth (forget about “white wine with white meat…”). 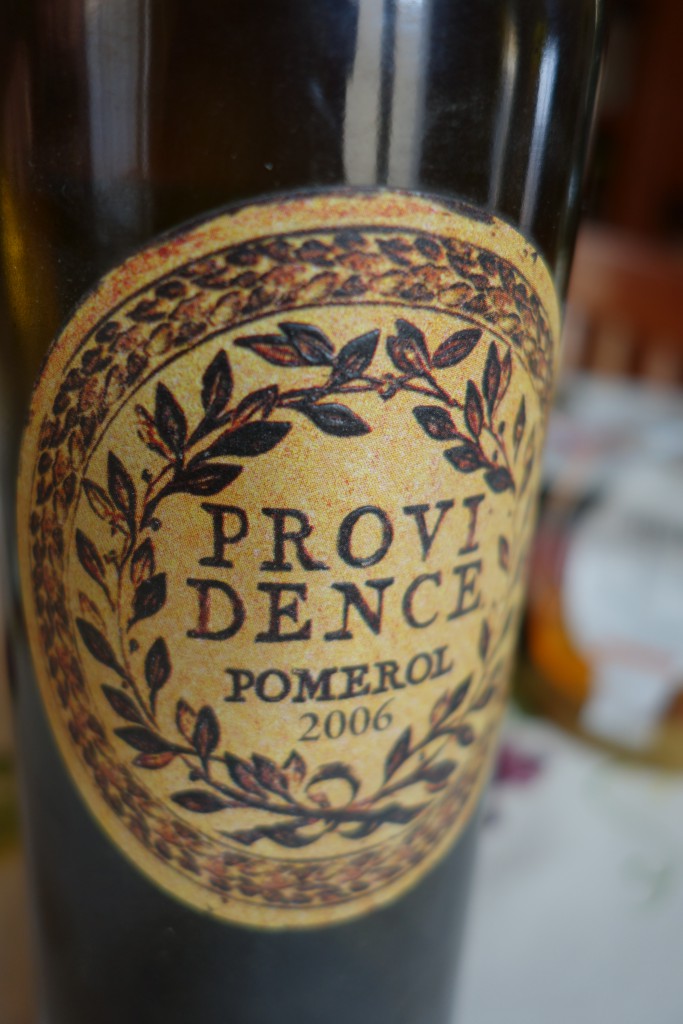 The first wine to go with the bird was 2006 Providence.
Providence (one word, no mention of the name château) is an estate in Pomerol that was previously called Château la Providence. It was acquired in 2005 by Jean-Pierre Moueix. There are just under 3 hectares of vines, located between the church and Château Hosanna, which also belongs to Moueix.
Grape varieties are 90% Merlot and 10% Cabernet Franc.
This is a rare bottle because not only is production small, but Providence ceased to exist after the 2012 vintage, when the wine began to be incorporated into Ch. La Fleur-Pétrus.
2006 Providence had a deep dark color just starting to brown a little on the rim. The nose was fresh, definitely oaky, and plummy, showing the sort of ripeness one associates with a hot climate country. The wine was fairly sexy on the palate with creamy, vanilla overtones and a rich melt-in-your-mouth texture. This is the obvious, crowd-pleasing sort of wine the Right Bank excells in. It is fine to drink now, and will be equally fine, in a different way, for years to come. Openness at an early age is one of Pomerol’s chief assets. 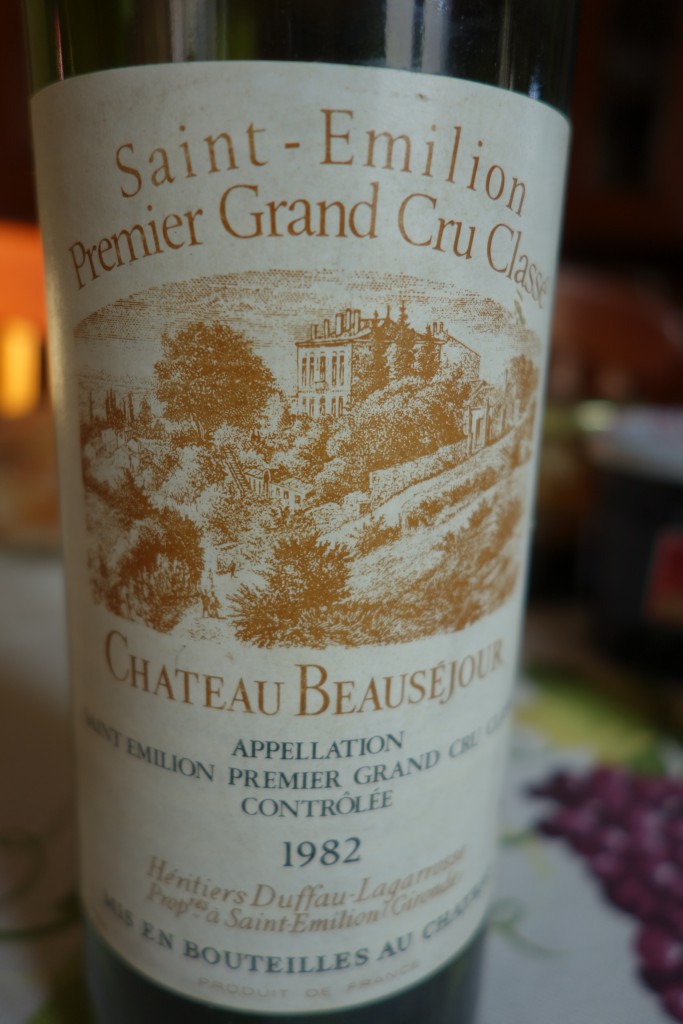 The next red wine was 1982 Château Beauséjour Duffau-Lagarrosse.
This is one of 18 premiers grands crus classés in Saint Emilion (14 in the B category and 4 in the A category). It is also the smallest. The 6.3 hectare estate is planted with 76% Merlot and 24% Cabernet Franc and has been owned by the same family for seven generations. It has long been confused with another premier cru, Ch. Beau-Séjour Bécot, who added a hyphen to try to simply things…
Although Beauséjour Duffau-Lagarrosse is in a prime location, the wines have had a checkered history. Things have recently been taken in hand by a management team consisting of Stéphane Derenencourt and Nicolas Thienpont, also responsible for winemaking at two other premiers crus: Larcis Ducasse and Pavie Macquin.
Anyway, as we all know, 1982 has a great reputation in Bordeaux, which this wine pretty much upheld. The color looked far younger than its years, with lovely nuances. The nose featured complex aromas of ash, talc, mushroom, and cherry preserves. There was also an old, ethereal side expressed in floral overtones. The wine started off round on the palate, going on to reveal velvety tannin, but also marked acidity on the finish. In my opinion, it started coming down from its plateau a few years ago, but is still vital and very enjoyable. 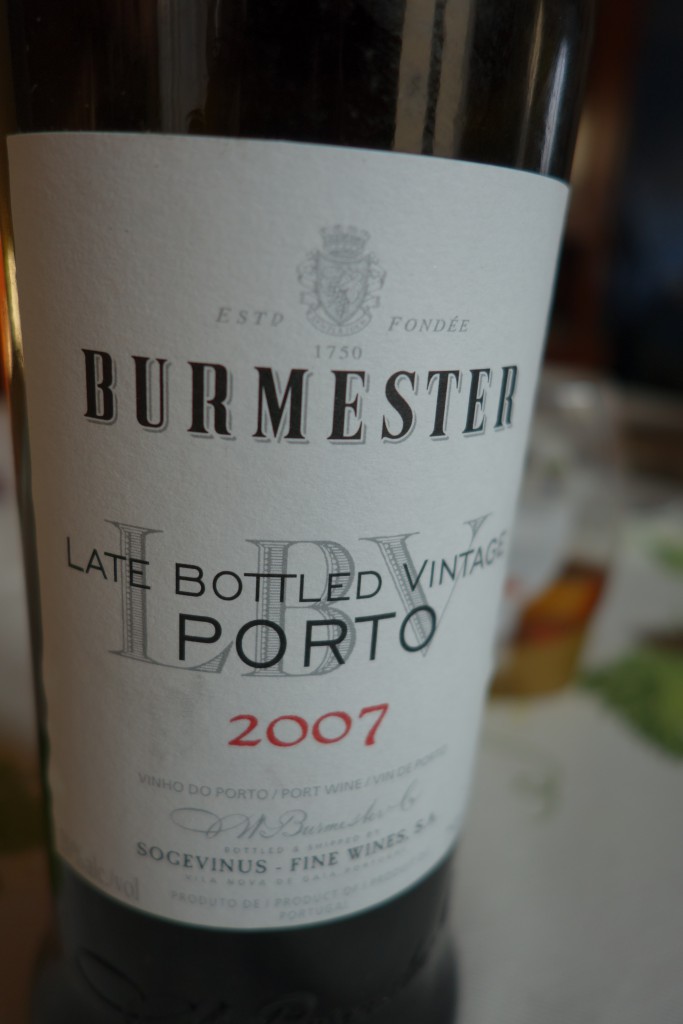 We ended the meal with a 2007 Burmester Late Bottled Vintage Port. This had an unbelievably intense color, an equally youthful and intense nose, and the taste of a fine young vintage rather than a 9 year-old LBV. This was a fairly spirity and vigorous Port. Does one age LB? I’d be tempted to do so if I had another bottle of this…