A friend came down to visit from Paris, so this was a great opportunity to invite some other friends over to enjoy a wine dinner.

The aperitif was Mumm rosé. I was surprised by this wine for three reasons. First of all, by the dryness. Many mainstream bruts have perceptible residual sugar. But not here. Second, as opposed to many rosé Champagnes, you could actually taste the tannin on the finish, and this was very attractive. This was a rosé with attitude. Third, the quality was much better than one might expect from a huge producer. So, this was an altogether pleasurable experience.

The first red wine of the evening was 2000 Malartic-Lagravière. To the amazement of my Bordeaux-loving friends, I have found many of the 2000s open for business. However, I must admit that this Malartic was still a little too young. It was also delicious and the wine of the evening.
It had a lovely dark core and the rim is just starting to show some brown.
The nose was wonderful, with hints of lead, leather, truffle, humus, and matchstick. There were also subtle coffee and blueberry aromas. The bouquet was really very elegant, complex, and seductive.
The wine was only slightly less good on the palate, with a texture that was unctuous, but not thick. In fact, it reminded me so much of a good Pomerol that I checked Malartic’s Merlot content in the Féret: 45%. The château’s round, sensual side was there in spades along with a welcome touch of tartness. The tannin on the aftertaste was reminiscent of tea, and showed that 2000 Malartic-Lagravière will have more to offer in the coming years.  I might add that Malartic represents tremendous value for money. A class act that won’t break the bank… The Bonnie family have another Pessac-Léognan, Ch Gazin-Rocquencourt, that is also well worth investigating. 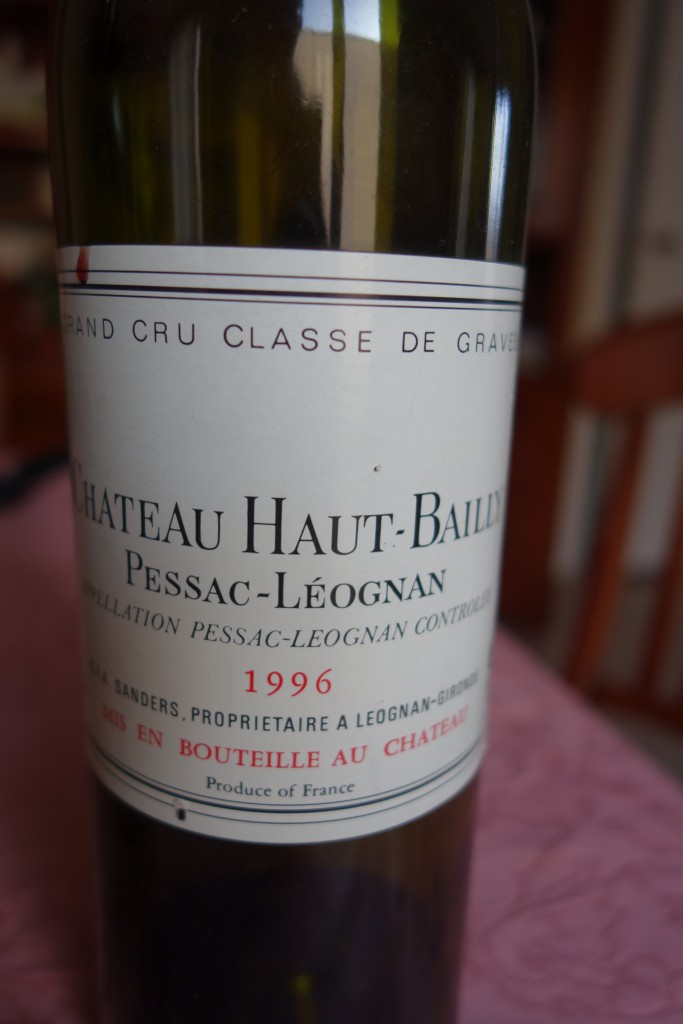 Next up was 1996 Haut-Bailly. Curiously, this seemed younger than the previous wine. The color was beautiful and vibrant, and there were still bright purple highlights. On color alone, I would never have taken this wine to be 20 years old.
The nose was very deep, with brambly, lilac and, once again (like Malartic) truffle nuances. There was a dark, brooding side to the bouquet, as well as ethereal, powdery notes.
96 Haut-Bailly was less giving on the palate than the Malartic. It had high-quality textured tannin, but also a tight side that time will certainly soften to some extent, but never completely. There were attractive cherry and briary aromatics, but the wine is just too restrained.

The next two wines were served blind. 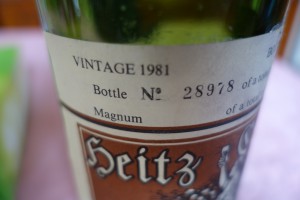 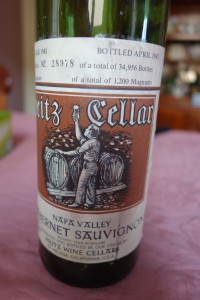 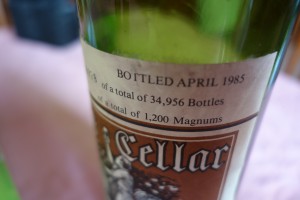 The 1981 Martha’s Vineyard had just come from Paris that day, so it was a little cloudy. The color was light with purple highlights. The nose showed plummy, blackcurrant, and biscuity aromas. The wine had lovely balance on the palate and sweet candied fruit flavors. There was nevertheless a certain hotness on the aftertaste. People were a little destabilized as to the wine’s origin and several guessed Châteauneuf-du-Pape. That does not surprise me because I have often thought that many California Cabernets resemble good Rhone Valley wines more than they do Bordeaux.
This thirty-five year old wine proves, to any who doubted, that California can indeed produce fine wines with good ageing potential. This 1981 certainly seemed much younger than its years. Martha’s Vineyard is an iconic Napa Valley Cabernet produced since 1966. It corresponds to the American version of a grand cru and this wine confirms that reputation. Bordered by eucalyptus trees, the vineyard is sometimes said to reflect their odor, although none of us were able to perceive this.
If we can get beyond the dilemma of comparing apples and oranges, Martha’s Vineyard this evening was in the same league as the two Pessac-Léognan great growths.

The last wine was 1958 Château Ausone (no photo, the bottle had no label, but the capsule and cork were authentic). What can I say – other than to thank my friend for bringing such a rare wine (as well as the Heitz). This 58-year-old Ausone was like a dream, a shadow of its former self, as reflected in the dark, but obviously extremely old color. There were vaporous aromas of charred wood, burnt rubber, and rose petals on the nose. The wine showed searing acidity on the palate, as well as subtle tertiary (you might even say quaternary!) notes. 1958 has an execrable reputation, and this wine would have been better some time ago, but it was still wonderful to drink a bit of history, and a fine end to the evening.