There’s a saying going back many years that “Lynch Bages is the poor man’s Mouton”, although the former’s rise in quality – and price – make this a little less true nowadays…
Some witty person later added: “… and Haut Bages Libéral is the poor man’s Lynch Bages”!

Half of Haut Bages Libéral borders on Château Latour and the other half is just behind Château Pichon Baron. From the 1960s until the early 80s, this thirty-hectare 5th growth Pauillac was owned by the Cruse family, and then acquired by the Villars family. Claire Villars Lurton is now at the helm. 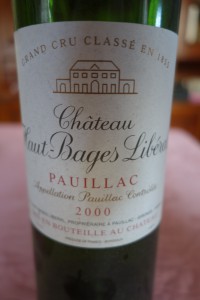 We all know about the year 2000 and the speculative fever it induced. I have always liked the wines, but do not agree with people who think the great growths need “decades to age”. On the contrary, my experience has showed that sixteen years down the line many of them are well within their drinking window. So, wondering what wine to serve with a leg of New Zealand lamb I decided to open a bottle of Haut Bages Libéral, which has the reputation of being a reliable if unexciting wine.

Well, I must say I was underwhelmed. The color looked older than its years. The nose was really very muted, but if you looked hard you could discern cherry, briar, humus, graphite, and cigar box aromas. The wine had a thin oily mouth feel and a wimpish aftertaste. I’m all for subtlety, but not to the point where this is the shadow of what a great growth Pauillac in a good year should be. This 2000 Haut Bages Libéral would unquestionably have been better years ago to all but the most hard-bitten adepts of old tertiary Bordeaux. And I’m willing to bet even they would be disappointed with this wine.

I’ve tasted more recent vintages of Haut Bages Libéral and think the estate is on the upswing. However, as a consumer, I will make sure to drink mine on the young side from now on.