Château Latour stopped selling on a futures basis beginning with the 2012 vintage. They nevertheless invite professionals to taste the new vintage every year just like all the other châteaux. In addition, they pour older wines that have been released on the market on this occasion. 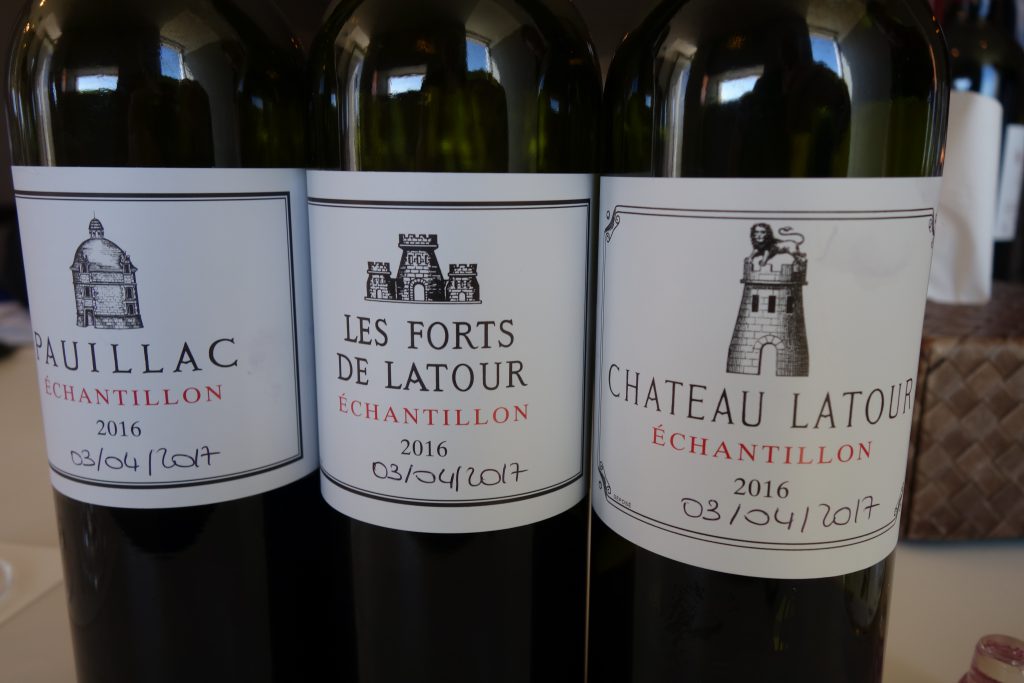 2016 Pauillac (54.6% Cabernet Sauvignon, 38.9% Merlot, and 6.5% Petit Verdot): I must admit to once again being very taken with the Latour’s third wine. Even if rather subdued at present, it shows ripe, sweet, plummy, blackurrant preserves on the nose and reflects its terroir – a sort of apotheosis of Cabernet Sauvignon, even at this level and despite the much lower percentage of that variety in the final blend compared to the grand vin. It may be a tad weak on the middle palate and does not have quite the breadth of the latter, but is a very good wine.

2016 Les Forts de Latour (64.3% Cabernet Sauvignon, 35.3% Merlot, 0.4% Cabernet Franc)
This is unsurprisingly one step up from the Pauillac AOC. It has a nice, fresh, promising nose with a slight, not unpleasant herbaceousness, as well as a meaty quality. The wine is big and spherical on the palate and spreads out with considerable richness. Les Forts displays the 2016 sweetness along with decent grip, great acidity, and a dry mineral aftertaste. The finish is layered and velvety.

2016 Château Latour (92.9% Cabernet Sauvigon, 7.1% Merlot) – The bouquet is at the same time seductive and aristocratic, with violet overtones. Divine.
To say the least, the wine has good structure on the palate. Very much the “iron fist in a velvet glove”. Big and develops with self-assurance and grace. The tannins coat the teeth and the aftertaste goes on and on. If this is a monster, it is a very well-behaved one… Superb potential. 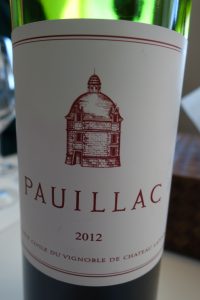 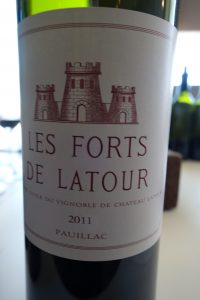 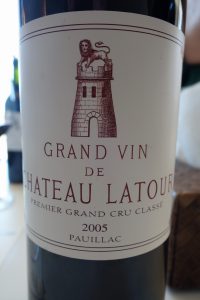 The three 2016s were followed by same three wines from older vintages that are in bottle and out on the market:

2012 Pauillac (43.9% Cabernet Sauvignon, 54.5% Merlot, and 1.6% Petit Verdot)
This wine looks older than its years and the rim is just starting to brown.
It already has a nose of lovely aged claret with a trace of cocoa. There is also a definite greenness, the effect of a late-ripening year, but it fits in somehow. The wine is somewhat thin and angular on the palate, but the Latour style is definitely there. Austere. A Bordeaux for Bordeaux lovers. Others might be put off. Relatively long aftertaste, once again mineral.

2011 Les Forts de Latour (61.5% Cabernet Sauvignon, 35%% Merlot, 0.5% Cabernet Franc, and 3% Petit Verdot)
Very deep youthful color with an uplifting bouquet of red fruit, menthol, and graphite. Already quite expressive at this age. The wine starts off round and attractive on the palate, then dips somewhat before coming back with a deep mineral aftertaste. There is a slightly dilute quality to the wine, but this is redeemed by the forceful aftertaste, which is very dry. Not the greatest balance, but bears the unmistakable stamp of Latour’s terroir.

2005 Château Latour (87% Cabernet Sauvignon, 12% Merlot, 0.5% Cabernet Franc, and 0.5% Petit Verdot)
This looks perhaps five years little older than its age (twelve years). The nose is redolent of luscious ripe fruit with captivating earthy nuances, accompanied by notes of pencil shavings typical of this estate as well as other Pauillacs. This graphite quality comes through on the palate as well. The taste is thirst quenching and follows through flawlessly with liquorice, blackcurrant, and wildberry flavors. There is a beautiful silky texture that leads into a majestic aftertaste with extremely fine-grained tannin and candied black fruit nuances. Last year, the 2000 Latour was poured and everyone was surprised how ready to drink it was. This 2005 is another kettle of fish. Give it another 10 years at least to make the most of it. Très grand vin.