The Bordelais are a bit like Texans. They naturally assume everything is bigger and better in their part of the world… Their département, the Gironde, is the largest in France and their wine the most famous on the planet (bar one: Champagne). However, Bordeaux was closed like an oyster for many years to wine lovers. You needed an introduction to visit the famous châteaux and it was difficult to see much of anything without a car.

This has all changed enormously in recent years, and nothing illustrates this more than the new Cité du Vin. Created by the Foundation for Wine Culture and Civilisations – funded by various local government agencies plus the EU (80%), along with private sponsors (20%) – the Cité was inaugurated by François Hollande on the 31st of May 2016 and open to the public the next day.
That makes June a very busy month in Bordeaux, with European Football Cup matches played here and the Bordeaux Wine Festival (http://www.bordeaux-wine-festival.com/) taking place at the end of the month. 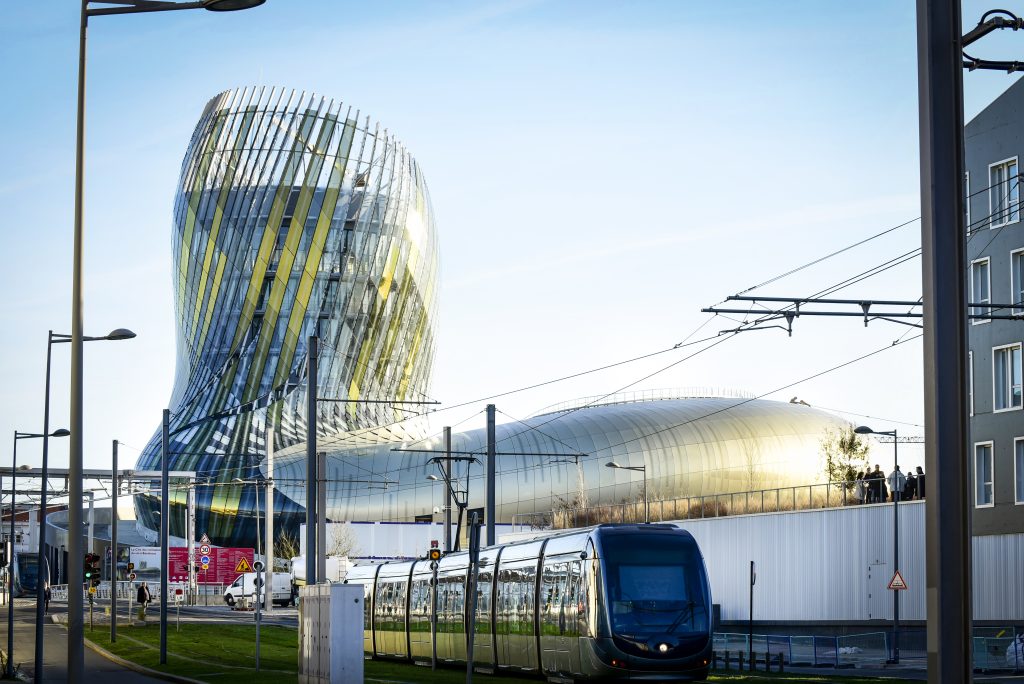 Designed by the Parisian firm of XTU Architects, the Cité du Vin is housed in a striking modern building on the Garonne River. Its unusual shape has been the butt of cheeky jokes, but it kind of grows on you…
It is easy to go there by tram www.infotbc.com or even on a municipal water taxi www.batcub.fr . Parking facilities have not yet been entirely worked out.
The Cité is located in Bacalan, a part of town long considered “the wrong side of the tracks”, but currently undergoing a major transformation. Buildings are sprouting up everywhere and the nearby new Chaban Delmas lift bridge enables outsize cruise ships to dock a little further upriver, in the heart of the city.
In fact tourism has grown by leaps and bounds since Bordeaux was designated a UNESCO World Heritage Site in 2007.

Let’s start out with a simple explanation of what in the world the Cité du Vin actually is. Neither a museum nor an amusement park, it is a center with several functions. Most people just passing through Bordeaux will limit their experience to going on the permanent exhibition circuit, an attractive and fun way to learn about the world’s vineyard regions thanks to sophisticated, imaginative, interactive multi-media presentations. Visitors are given a smartphone and headphones and then set out discover the 19 different modules by themselves, at their own pace (there are no guides), and in any order they wish. The scenography was laid out by the English firm of Casson Mann, who also designed that of the Imperial War Museum in London and the Benjamin Franklin Museum in Philadelphia. 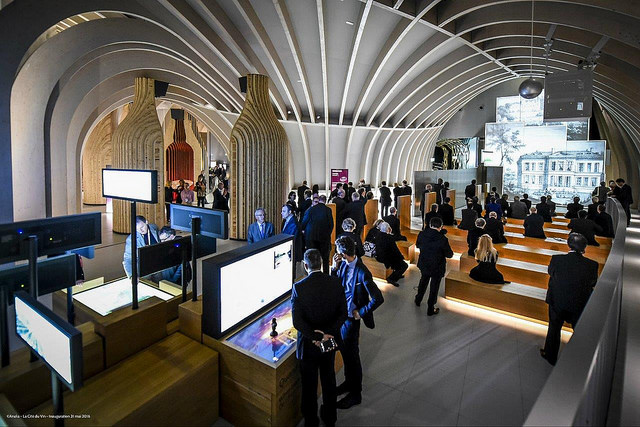 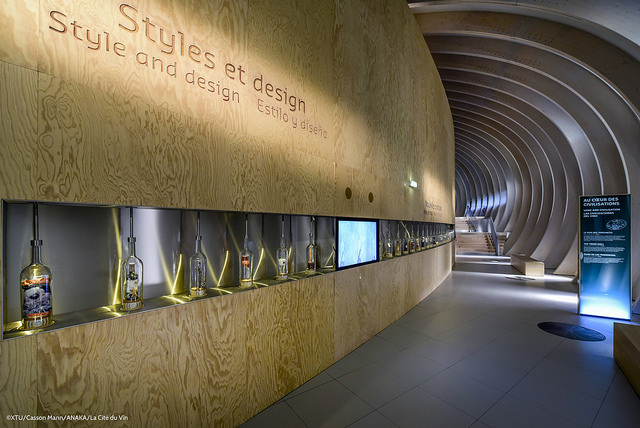 The total duration of audio-visual presentations is more than 10 hours, but most visits last less than two. Aerial views of some of the world’s most beautiful vineyard regions on enormous screens are spellbinding. In fact, the visual and sound effects everywhere are altogether pretty remarkable.
However, the Cité is not just about screens. The 3,000 metres open to the public also include a battery of marvelously retro “Nez du Vin” type wine aroma sniffers, a honeycomb of various-sized rooms for tastings, a trippy “Imaginarium”, “sensory workshops” for children, etc. I might add that I think children will enjoy the experience as much as their parents – minus the tasting of course!
After the tour, a glass of wine is served at an enormous tasting bar on the 8th floor “belvedere,” an observation deck featuring a circular plate glass window affording a commanding 360° view of Bordeaux. 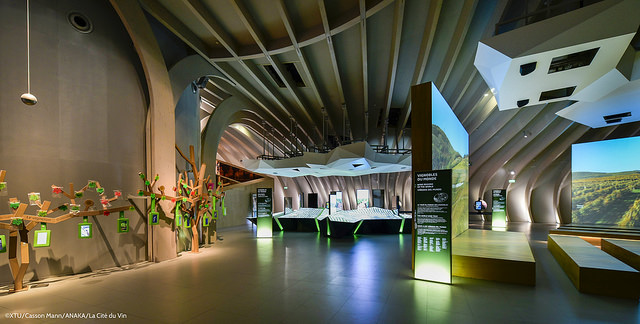 The other parts of the Cité can be visited without buying a ticket. The 7th floor houses a restaurant called, appropriately enough, “Le 7”. Run by the team from the Brasserie Bordelaise, the Terrasse Rouge (Château La Domnique), etc., the restaurant is rather small (seats 70, and another 30 on the terrace). This reflects the fact that the initial project had to be downsized in light of budgetary restrictions.
The first floor contains an auditorium, a number of workshop rooms, a temporary exhibition area, a function room, and a reading room (as opposed to a lending library) with books on wine in many languages.
The Latitude 20 snack bar, wine bar, gift shop, and wine boutique are on the ground floor. The latter has a huge selection from 80 countries! And if you have twelve and a half thousand euros to spare, you can even buy a bottle of 2009 Romanée-Conti…

As much as Bordeaux goes in for navel-gazing, the Cité du Vin is well and truly international. Obviously, Bordeaux is not given short shrift though, and there is a desk to help tourists arrange to see the local wine country. Some 450,000 are expected a year. Cost of admission: 20 euros, including a glass of wine on the top floor. Tickets are best purchased over the Internet http://ticket.laciteduvin.com/en-GB/home where there is a choice of time slots.

A program of special events is in the making, and the Cité du Vin will regularly host wine-related and other conferences as well as a number of exhibitions. The first temporary one (July/August) will highlight the wines of Georgia, the cradle of winegrowing.
So, does the Cité live up to all the hype? I think any wine lover would enjoy it immensely and it has been planned to welcome the whole family. That is the key: making wine interesting and fun to the public at large – people of all ages and origins. This is not a facility targeting wine professionals, nor does it go into the technical aspects of winemaking. The original name was “La Cité des Civilisations du Vin”, and the emphasis is indeed on wine cultures from around the world. The Cité du Vin is not only extremely international, but also unabashedly modern, and puts paid to Bordeaux’s somewhat stuffy image. A visit there is an entertaining, educational experience in a very 21st century sort of way, making use of state-of-the-art technology and giving people the liberty of experiencing things their own way, at their own pace.
It unquestionably adds another stone to the edifice of Bordeaux’s claim to be “The World Wine Capital.”