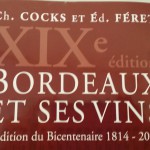 I have just received my copy of the most recent Cocks & Féret – the 19th edition. A new one is published every 5 to 7 years.

The history of the “Bordeaux Bible” is quite a long one, going back to Bordeaux: its wines and the claret country by Charles Cocks published in London in 1846. In 1850, the Guide de l’étranger à Bordeaux et dans la Gironde. Bordeaux, ses environs et ses vins classés par ordre de mérite was first published by Féret in Bordeaux.

In 1874, Édouard Féret separated the book into two parts:

The 2014 edition has fewer pages then the preceding one for the first time in 20 years: 1,952 compared to 2,291 in 2007. This is primarily due to the fact that many estates have disappeared or merged. For instance, in the 1995 Féret, only two or three châteaux had more than 100 hectares of vines… but there are over forty today. Eight hundred of the 1,500 estates eliminated in the past seven years had fewer than 10 hectares. Furthermore, just over 100 natural or legal persons own nearly 20,000 hectares of vines, i.e. over 18% of the total vineyard area in Bordeaux (115 000 hectares).

The book is broken down into several parts: information about winegrowing in Bordeaux, the 5,000 châteaux, the 1,900 négociant brands, a breakdown of production by commune (554 in the Gironde), a list of the 160 négociant firms (which is also significantly reduced compared to the last edition), and a complete index that is at the front of the book – quite useful for such a thick tome).

The smallest estate in Bordeaux is Château Linot in Saint Estèphe (0.07 hectare) and the largest is Château La Borne in Massugas (321 hectares) in Massugas)