Can there be any more esoteric Bordeaux appellation than Graves de Vayres? With 700 hectares of vines it is by no means the smallest (that would be Saint Georges Saint Emilion at 192 hectares), but it has, shall we say, a very low profile. The appellation produces dry white, red, and semi-sweet white wines. 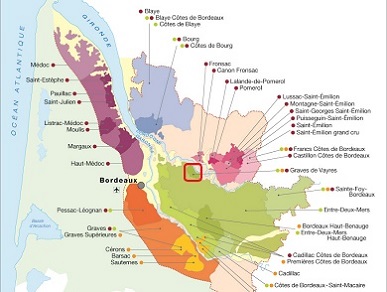 Graves de Vayres is located on the left bank of the Dordogne in the communes of Vayres (famous for its château, a listed historical monument) and Arveyres in the northwestern part of the Entre-Deux-Mers region. There are 40 producers and the soil consists of alluvial terraces.

I don’t often drink the wines, but had a bottle of the 2010 Château Lesparre squirreled away in the cellar and figured that it should be showing well at age nine. 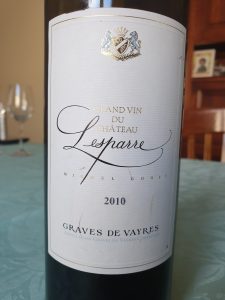 The color displayed a very deep, dark core and was just starting to brick on the rim.

The nose was not very profound, but featured attractive aromas of humus, candied cherry, and fennel, as well as a marked oak influence (vanilla, roast coffee beans).

The oak also came through on the palate. The flavor profile may have been somewhat angular and a little hollow, but redeemed itself on the aftertaste, even though this was a tad dry and grippy on the tail end. I came away with the feeling that this is perhaps an example of what happens when a wine of medium potential is somewhat overworked. Still, it is the sort of wine that shows much better at table and I am a sucker for off-beat bottles such as this. It is probably not far from its peak and if my tasting notes may have given the wrong impression, I enjoyed drinking it and furthering my knowledge of Bordeaux.