I am a great fan of the excellent affordable wines of Bordeaux. The Côtes de Bordeaux (especially Bourg, Blaye, and Castillon) are a treasure trove of relatively inexpensive wines with the class and distinction Bordeaux is famous for.

Case in point: Château Mercier in Saint-Trojan in the Côtes de Bourg. 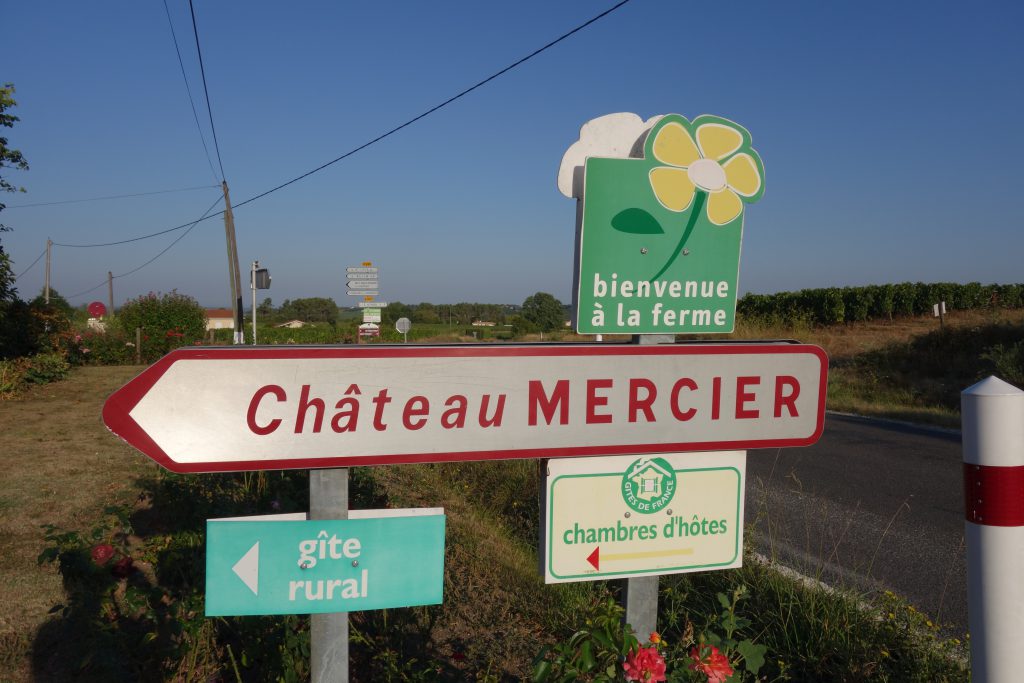 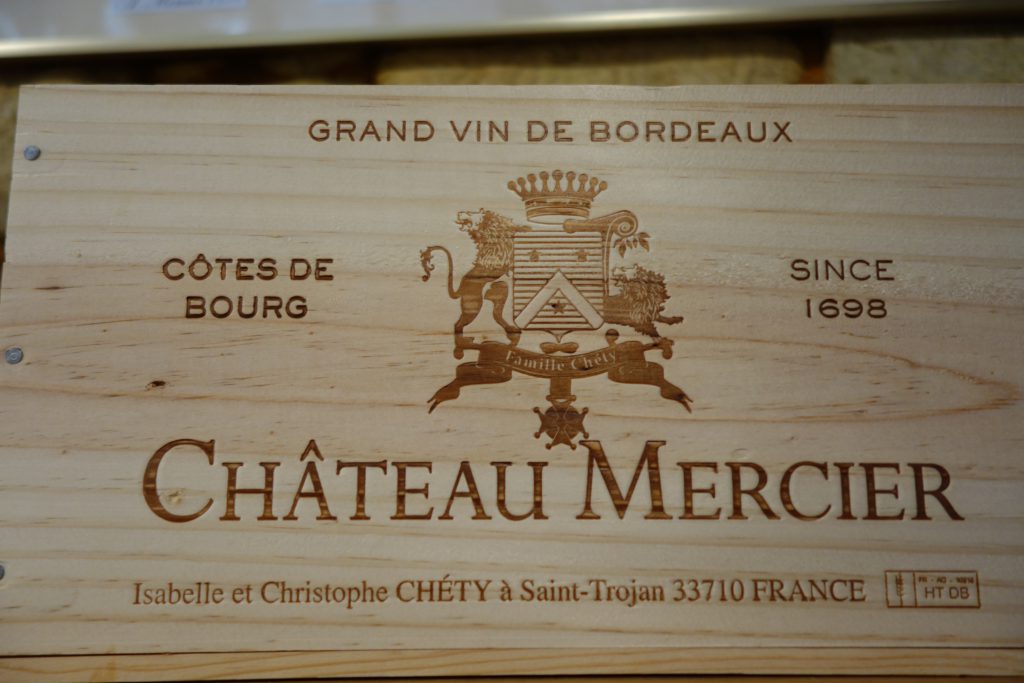 I have known this estate for years and never been disappointed. The Chéty family have been making wine at Mercier since… 1698! Philippe Chéty, a former mayor of Saint-Trojan and figure in the Côtes de Bourg, handed over management to his children Christophe and Isabelle – the 16th generation – in 1999. I visited Mercier in May during the Côtes de Bourg Portes Ouvertes, at which time they had some twenty different vintages to taste, not to mention the other wines produced by the château (white, rosé, clairet, crémant, etc.). 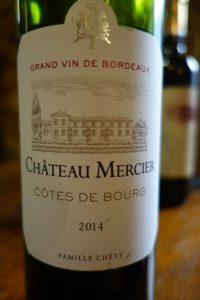 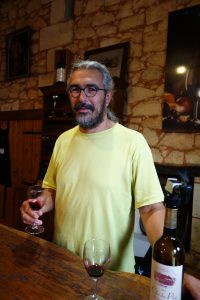 
I wanted to go back at the end of August for two reasons.

First of all, I had developed a strong affinity for Mercier’s white Côtes de Bourg – a relative rarity – called “Graines Blanches” and wanted to buy some more. This wine comes in a 3-litre bag-in-box as well as in bottle.
I find bag-in-box wine highly convenient if you just want a glass or two, or if you only need a little wine for cooking. It is rare for good estate wine to be packaged like this, so when three liters of a perfectly good, aromatic, nippy, dry white wine sell for just over 15 euros at the estate, that seemed like a no-brainer! I used the first box up in no time, so picked up two more.

The other reason for returning to Mercier was to find out more about Atmosphère, their new unsulfured wine. 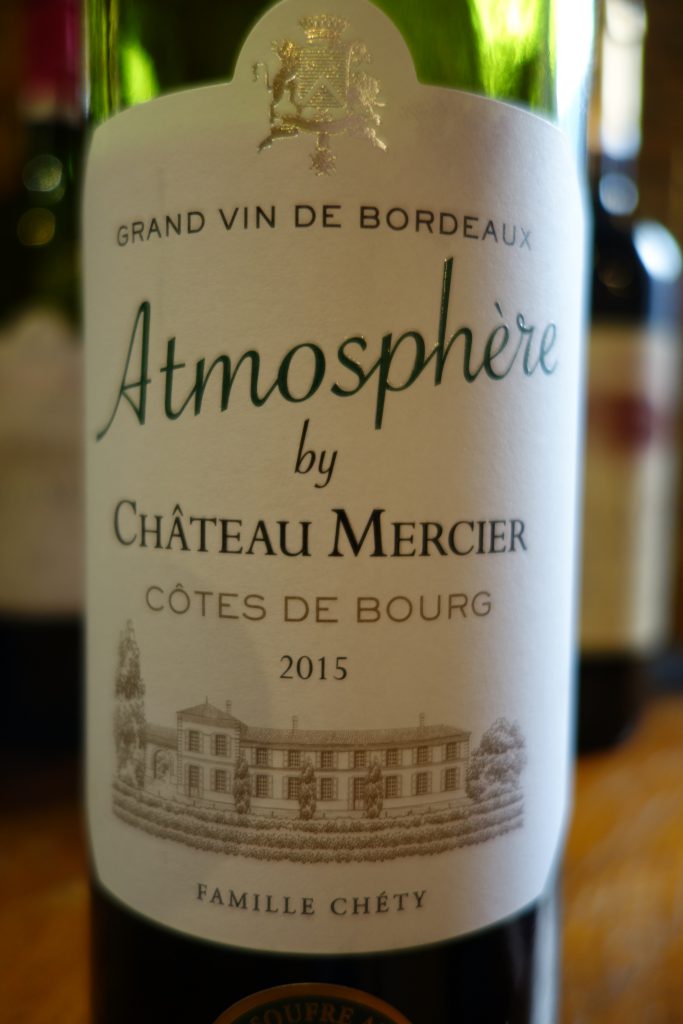 There is a lot of media attention and a fair deal of controversy about “natural wine”. In fact, the very definition of natural wine is open to discussion… I admit to having a prejudice against such wines because I have had some poor examples, because they seem more like a marketing gimmick than anything else, and because their “naturalness” is considered by some more important than the way they actually taste…

I was nevertheless intrigued that an estate as solid as Mercier should introduce a wine without sulfur (or, more exactly, with zero added sulfur, because there is always some intrinsic sulfur). I therefore bought a bottle in May to try, not expecting very much.

I might add that the natural wine ayatollahs would exclude Mercier’s wine because they use cultured rather than indigenous yeast (go figure…).

Anyway, I am pleased to say that my prejudice was overcome when I tasted Mercier’s 2015 “Atmosphères”. This 100% Merlot is a vibrant purplish red with a pure upfront nose of cassis leaves and black fruit – not deep, but fragrant, as well as simple, but seductive. Although soft and gulpable, the wine shows Bordeaux’s tannic reserve on the aftertaste making what might, at first, seem like a very good nouveau-type wine more serious and traditional. The wine displays lively acidity that is not at odds with the softness, as well as what I can only describe as a tealike flavor.

Bordeaux doesn’t do primeur wines, but Merlot made this way is a delight to drink quite young when it’s user-friendly and uncomplicatedly fruity. Atmosphères costs 10.50 euros a bottle at the estate. While unquestionably a very fun, anytime wine, it is much more than a diversion for bobos and health food nuts. It’s also an authentic Bordeaux that deserves attention.
Obviously, it takes special care to avoid adding sulfur. The trick is to keep the wine away from oxygen as much as possible throughout the winemaking process. Carbon dioxide (including dry ice) and nitrogen play a key role here. Furthermore, Mercier is also innovating by experimenting with Vinification Intégrale®, a patented method of red grape barrel fermentation. 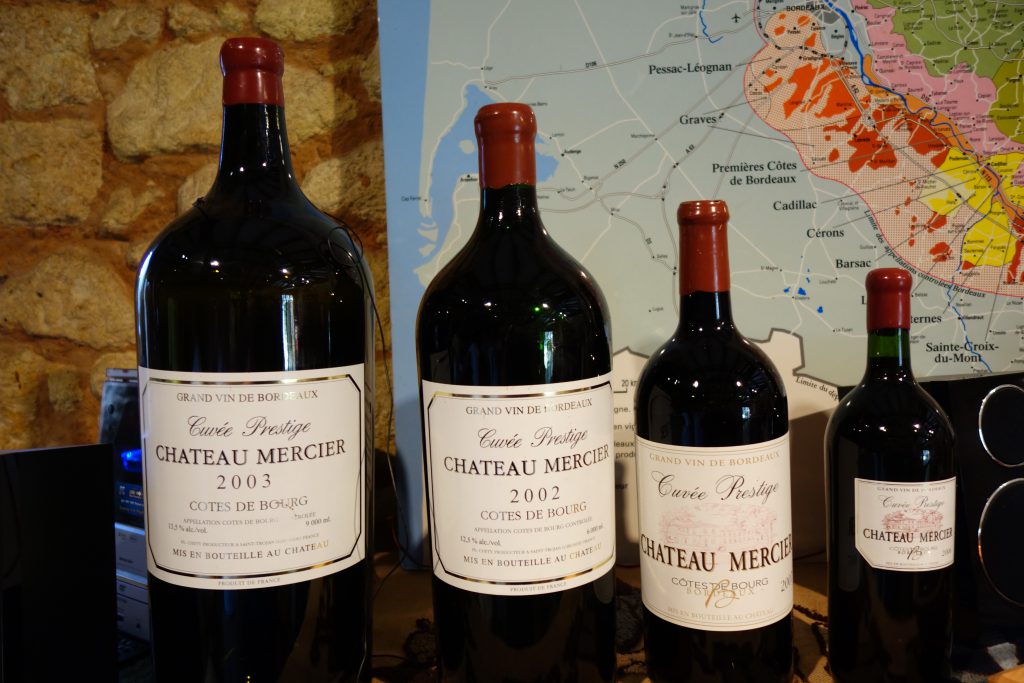 The Chéty family have a total of 50 hectares of vines, half of which comprise Château Mercier, with the rest taken up by Clos Piat and Château La Cottière, also in the Côtes de Bourg. Château Mercier also has a gîte (bed and breakfast) and if you are every in the region, you are sure to receive a warm welcome should you decide to visit.