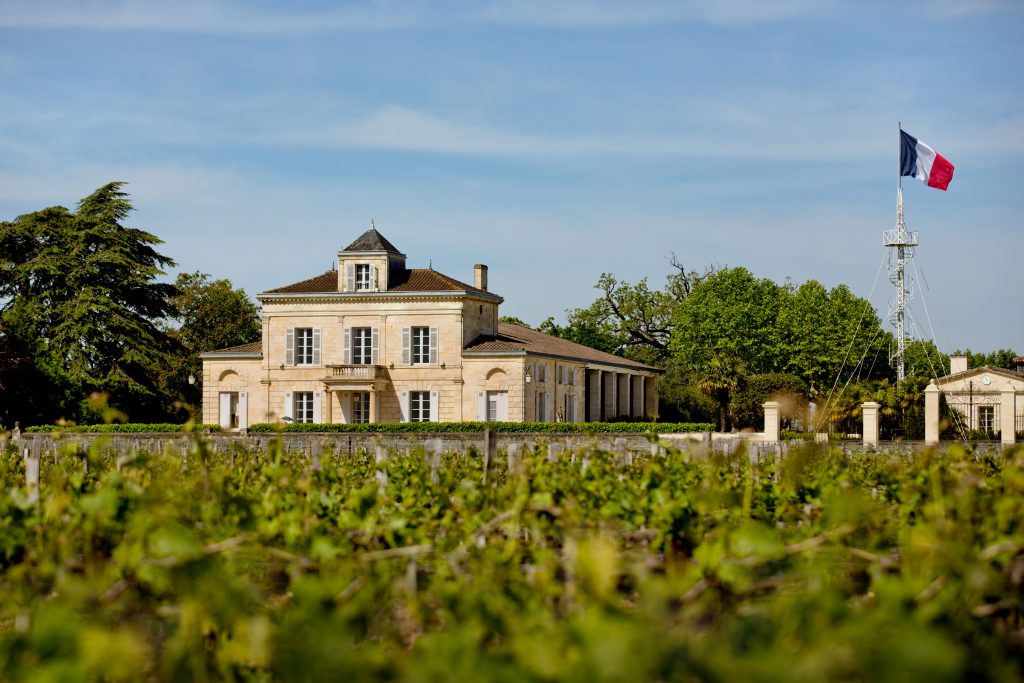 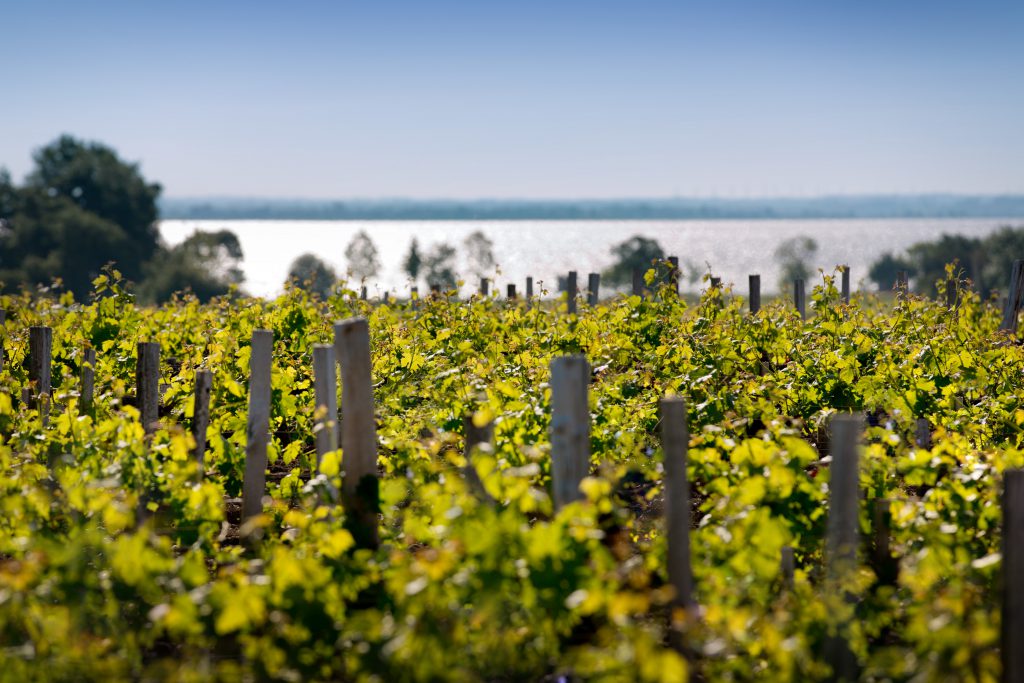 I was invited to Château Montrose on the 12th of October to see how the new vintage was going. I was glad to accept, because 2016 has been a very unusual year weatherwise and I curious to see what effect this had on the grapes. In fact, the harvest finished today (14th of October).

Château Montrose has 95 hectares of vines (90 in production). The estate is dramatically situated on a rise overlooking the Gironde Estuary. The vines go down the relatively steep slope almost to the river, which unquestionably has a positive influence on the microclimate, helping to avoid extremes of temperature. A soil survey defined Montrose’s gravelly terroir in the “terrace 4” category, not unlike Château Latour’s. Grape varieties are 60% Cabernet Sauvignon, 32% Merlot, 6 % Cabernet Franc, and 2% Petit Verdot.
A relatively recent estate in Médocain terms, Montrose was nevertheless classified a second growth in the 1855 classification. It belonged to the Charmolüe family from 1896 until 2006, when it was acquired by Martin and Olivier Bouygues, among the wealthiest people in France. Although they live in Paris, the Bouygues come frequently to Saint-Estèphe and are intimately involved with their estate.

The changes in Montrose in the past 10 years have been breathtaking. The 1,000 m² barrel cellar, completed in 2014, is a veritable temple of Bacchus, one of the most classical and beautiful in Bordeaux, which is saying something… All existing buildings were renovated and new ones built. Careful attention was paid to ecological concerns. The château has 3,000 m² of solar panels and draws on geothermal energy from a well dug some 100 meters deep… 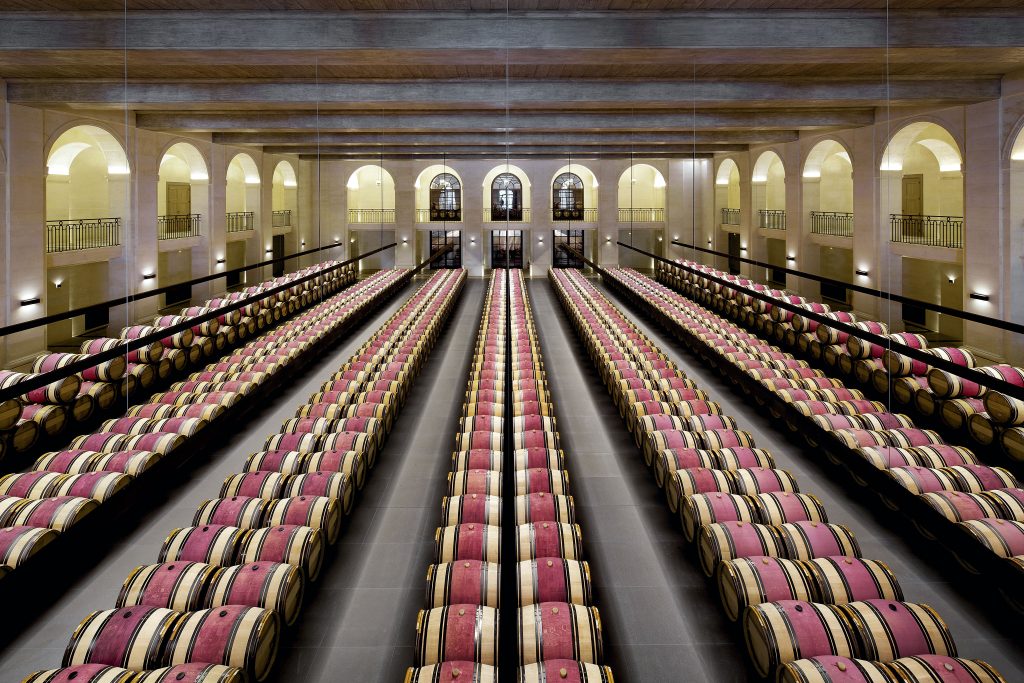 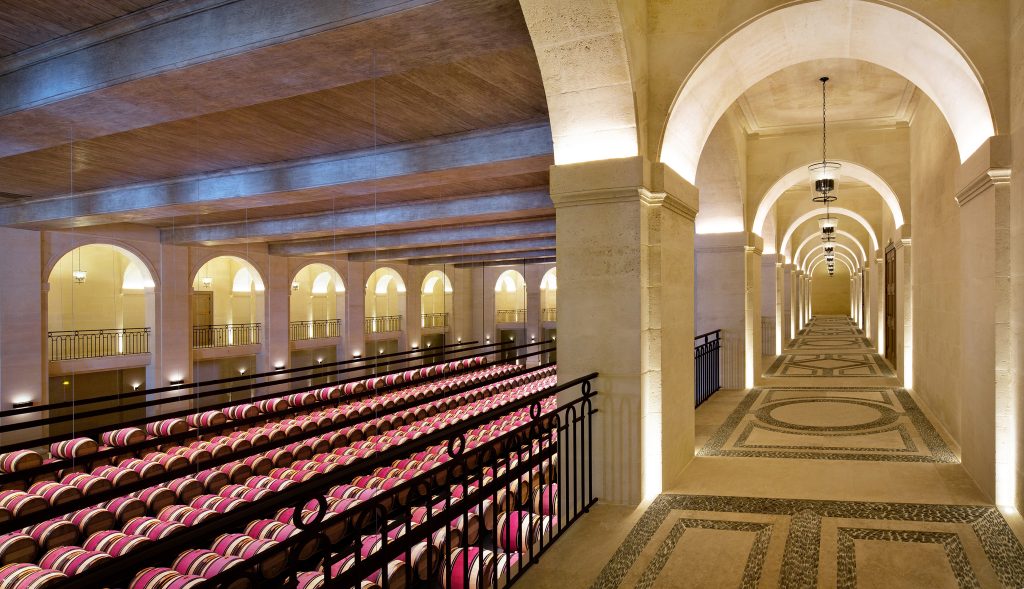 In this same spirit, experiments are being made with organic viticulture. Fifteen hectares are being farmed in this way and, what’s more, expressly in the part of the vineyard considered to be the most vulnerable to vine diseases. The results are very encouraging and it is hoped that the vineyard will be entirely organic within the next 5 years.
The 2016 harvest started on the 23rd of September. Like elsewhere in Bordeaux this year, the growing season got off to poor start due to a cool, wet spring. Bud burst at Montrose took place around the 4th of April for Merlot, the 11th of that month for the Cabernets, and the 14th for Petit Verdot. Flowering occurred on the same day for Merlot and the Cabernets (the 10th of June) and on the 14th for Petit Verdot. 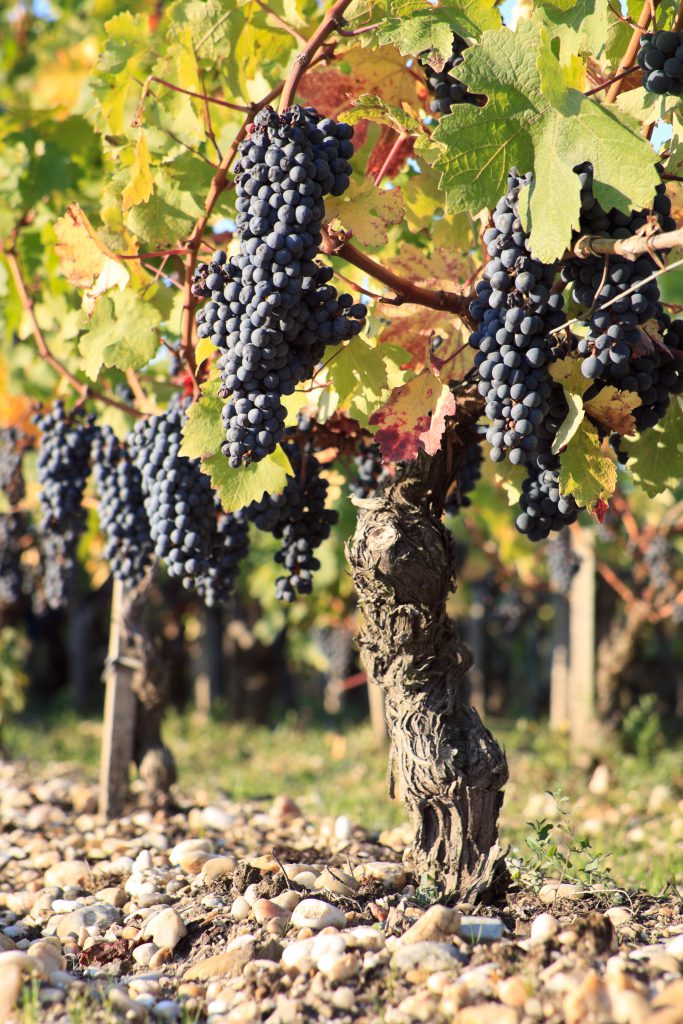 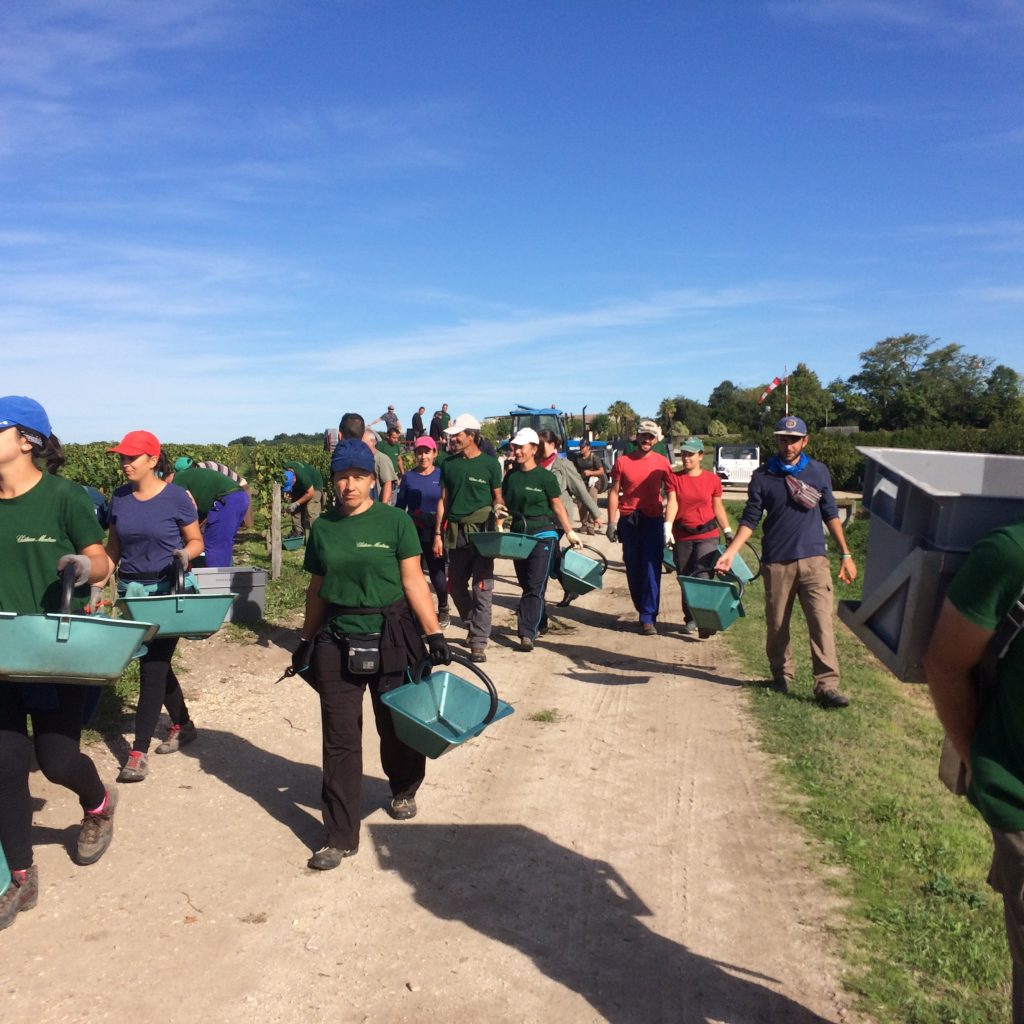 A heat wave in August changed things radically. Véraison took place on the 19th of August for Merlot, the 25th for the Cabernets, and the 29th for Petit Verdot.
Yes, there was some scattered scorching of grapes and vegetative growth was blocked for a time. But an important distinction must be made with 2003. The average highs in August of that year were 32°C, whereas they were 28°C in 2016. The vineyard manager, Mme Patricia Teynac, and the winemaker, M. Vincent Ducup, thought that this would spell high sugar levels. However, this was not the case. For instance, both Merlot and the Cabernets came at 13-13.5° potential alcohol, which is quite reasonable in a good vintage. All in all, this was a slightly early-ripening year.
The average yield was 41 hl/ha.

One of the hallmarks of 2016 is what can only be described as drought conditions. Precipitation from June until the present time has been abnormally low, and may well set a new record.
Montrose’s new (ten years already, even so…) owners have brought about two important changes in the wine. First of all, the selection process has been taken to great lengths. The second wine, La Dame de Montrose, has existed for years. However, a third wine was introduced in 2010, Le Saint-Estèphe de Montrose, and there is even a fourth wine now (!), which is sold in bulk to négociants. The grand vin now accounts for just one quarter to one third of the total crop depending on the vintage. 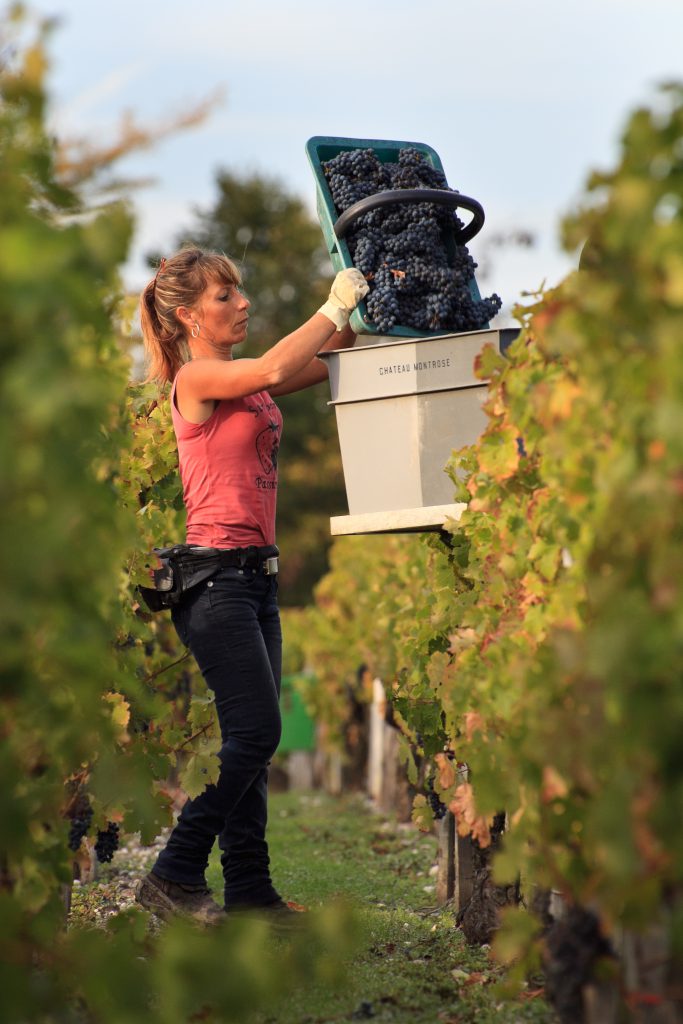 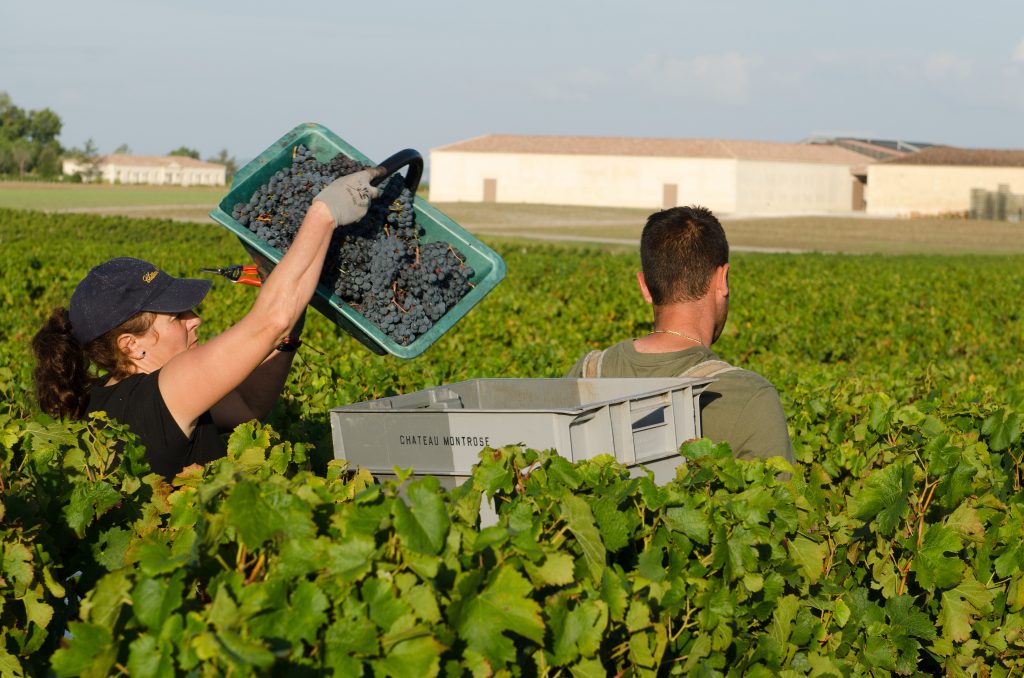 The second change involves winemaking. Montrose, renowned for its longevity, is now more open in its youth, but without compromising ageing potential. A neat trick, that seems to be working!
Montrose acquired part of Phélan Ségur, a large 21 hectare plot called Fonpetite in 2010. Wine from here has been integrated into the estate started with the 2010 vintage. It is nevertheless important to point out that this parcel was once part of Montrose, so the magical transformation of cru bourgeois land into great growth terroir from one minute to the next is inaccurate.
Be this as it may, much of Fonpetite’s production goes into the second wine.

At a time when 85% of all grapes in Bordeaux are machine harvested, there are 90 pickers at Montrose in 2016. As in years past, all of them come from the village of Pruna, near Seville. Fortunately, the winemaker speaks Spanish!

Among other innovations, Montrose is relying on drones that take infrared photos of the vines. These show different levels of maturity, even within the estate’s 90 separate plots. Montrose has also introduced the dividing of grapes from the premières grappes (bunches on the top of the vine) and deuxièmes grappes (ones from the bottom). The latter are riper and so are fermented separately.

The replanting program, begun in 2006, will take forty years to complete! Montrose is also experimenting with propagating the best vines rather than buying ones from a vine nursery.

Furthermore, Montrose has made an effort over the past 3 years to reduce sufur levels, going from 140 to 100 mg., with an aim to reach just 70 mg. 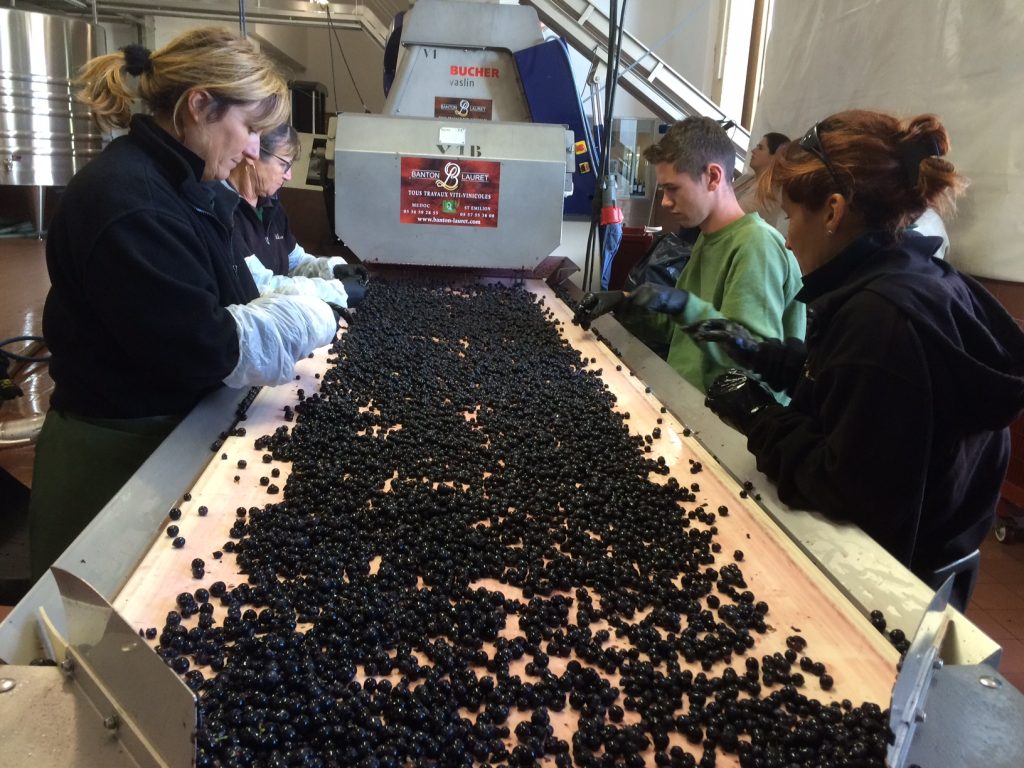 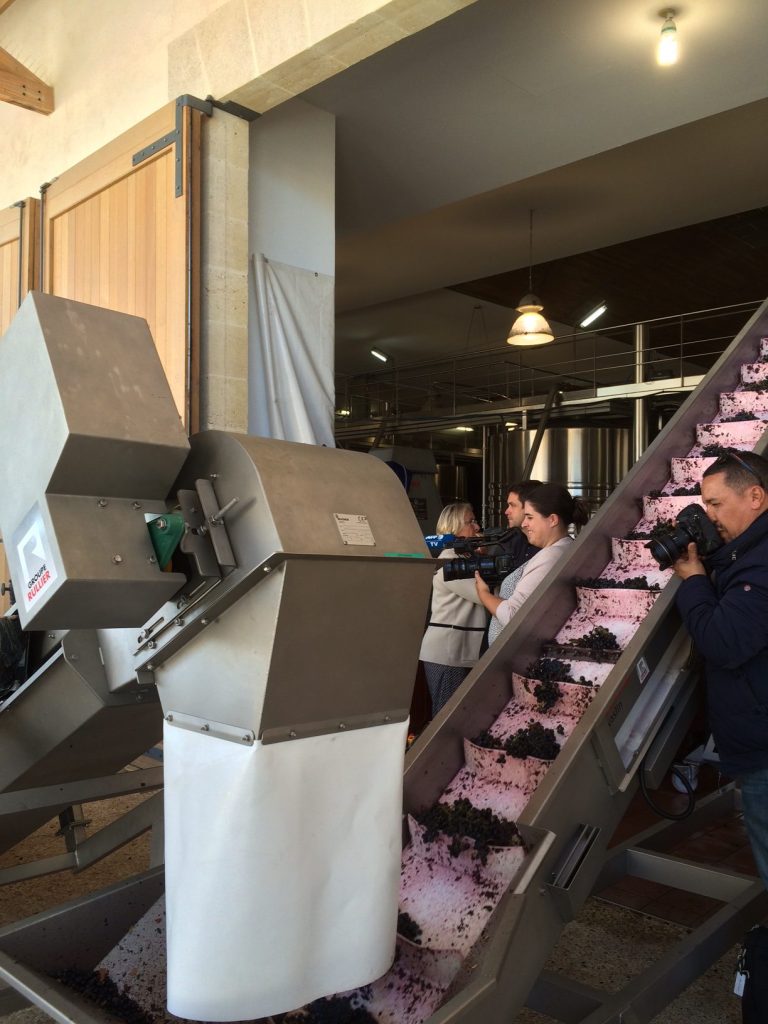 A visit to the vatroom revealed 65 stainless steel vats of varying capacity to keep wines from each plot separate in order to fine tune the final blend.
The ph of the new wine is about 3.5 for both of the main varieties. The anthocyanin content is greater than 2,000 for the Merlot and 3,000 for the Cabernets (measured according to the ApH1 Glories method)
I have a decent backlog of experience tasting young wines from barrel, but it is unfortunately beyond me to taste freshly pressed juice and appraise it. But going on Montrose’s track record, and based on the genuine enthusiasm of the winemaking team, I think something special is in store, and I look forward to tasting 2016 Montrose in March or April of next year.