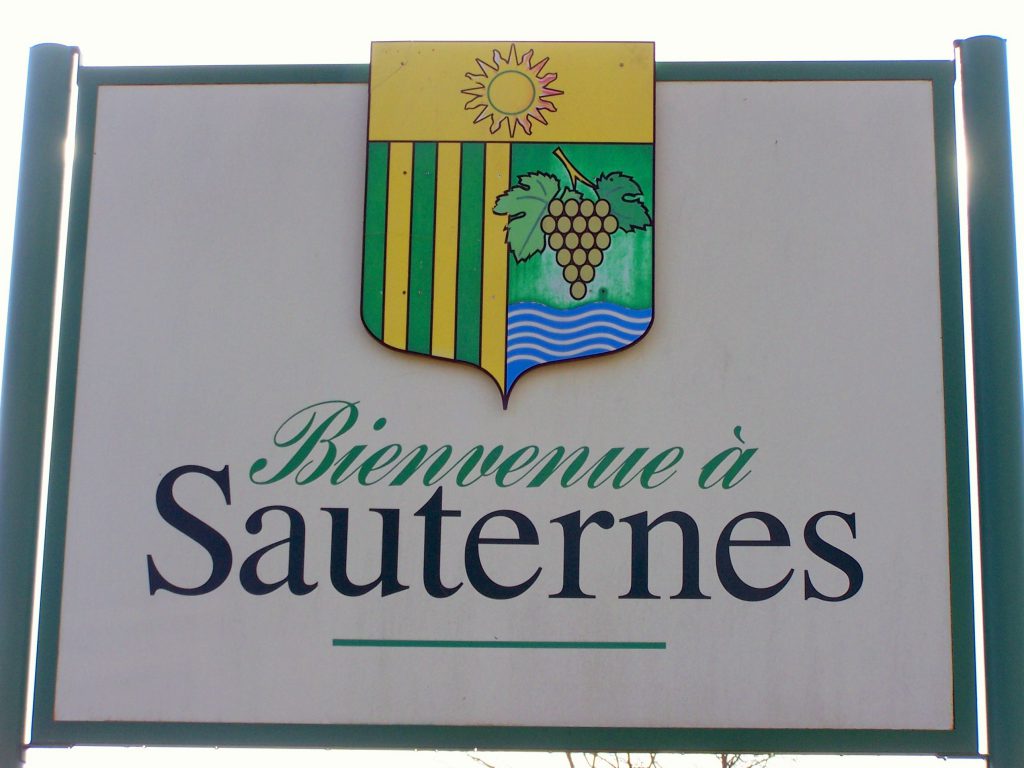 My friend, Suzanne Mustacich (journalist for the Wine Spectator and author of “The Thir sty Dragon”, a book about the Chinese market for Bordeaux) and I participated in the Portes Ouvertes on the 11th of November 2016.
Fifty-four châteaux opened their cellars to the general public for three days.
I have made some amazing discoveries on such occasions and met some fine people, so I frequently take advantage of the Portes Ouvertes.
A veteran of these “Open Days”, I know from experience that it is always better to go on the first day when there are fewer people.

So, we set off on a public holiday (Armistice Day) and began our visits shortly after 10 am. Our game plan was simple: to taste at a maximum number of châteaux without going on any tours. Why no tours? Simply because these go over much of the same ground and, to be honest, one cellar tends to look a great deal like another one…

Sadly, Sauternes is a wine that has been losing ground of late. The French market is anemic and people rarely serve it now as an aperitif – a traditional practice that always surprises and/or shocks English speakers. That means that Sauternes is currently considered in far too restrictive a way, as a wine to serve with foie gras during the Christmas season…
Furthermore, sweet foods (and drinks) do not have good press at the moment and many Sauternes are perceived as too thick and weighty. The appellation has an ageing consumer base and most producers do not have other types of wines (dry white, red) to fall back on.
The price of vineyard land has plummeted, and many estates are for sale.
Something has to be done, but what? Some estates are producing a lighter style of Sauternes and a cooperative is being created. The average vineyard holding in Sauternes is less than 3 hectares, so this will lead to improved technological capabilities and economies of scale. More controversially, some producers, such as Clos des Lunes, are making just dry white wines and are seeking to create a new appellation such as Coteaux Sauternais for them.

Anyway, here’s the rundown of our day. Obviously, it is not possible to do any sort of in-depth report with so many estates, so please think of this as a sort of road trip.
The Sauternes appellation covers 5 communes: Sauternes, Preignac, Fargues, Bommes and Barsac.
Barsac has its own separate appellation, but can also be sold under the name Sauternes. The choice is up to the producer. 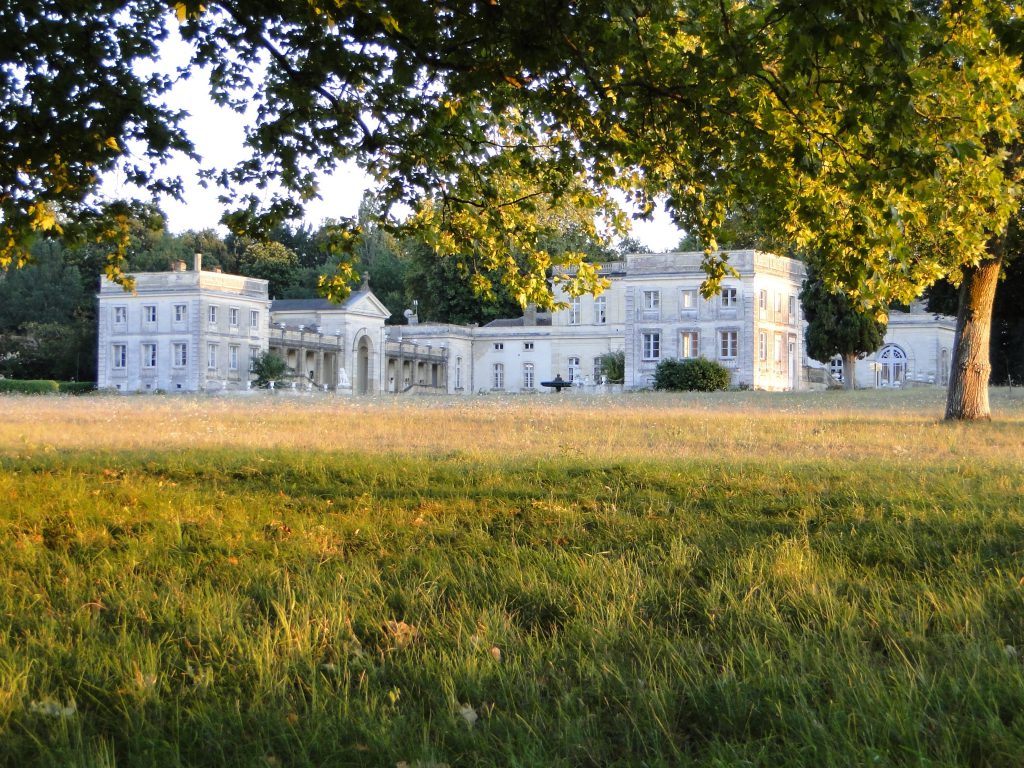 Our first visit was to second growth Filhot, in the commune of Sauternes – a magnificent château in a beautiful setting. We tried their 2013 Zest, a light easy-drinking wine with zippy packaging and an attractive price. This was followed by 2011 Filhot, which made a good impression. I bought a bottle of each. 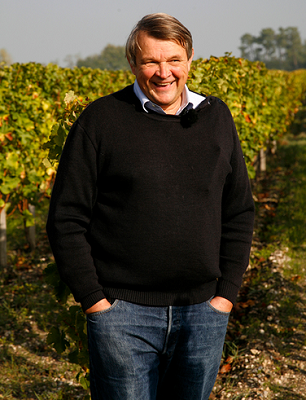 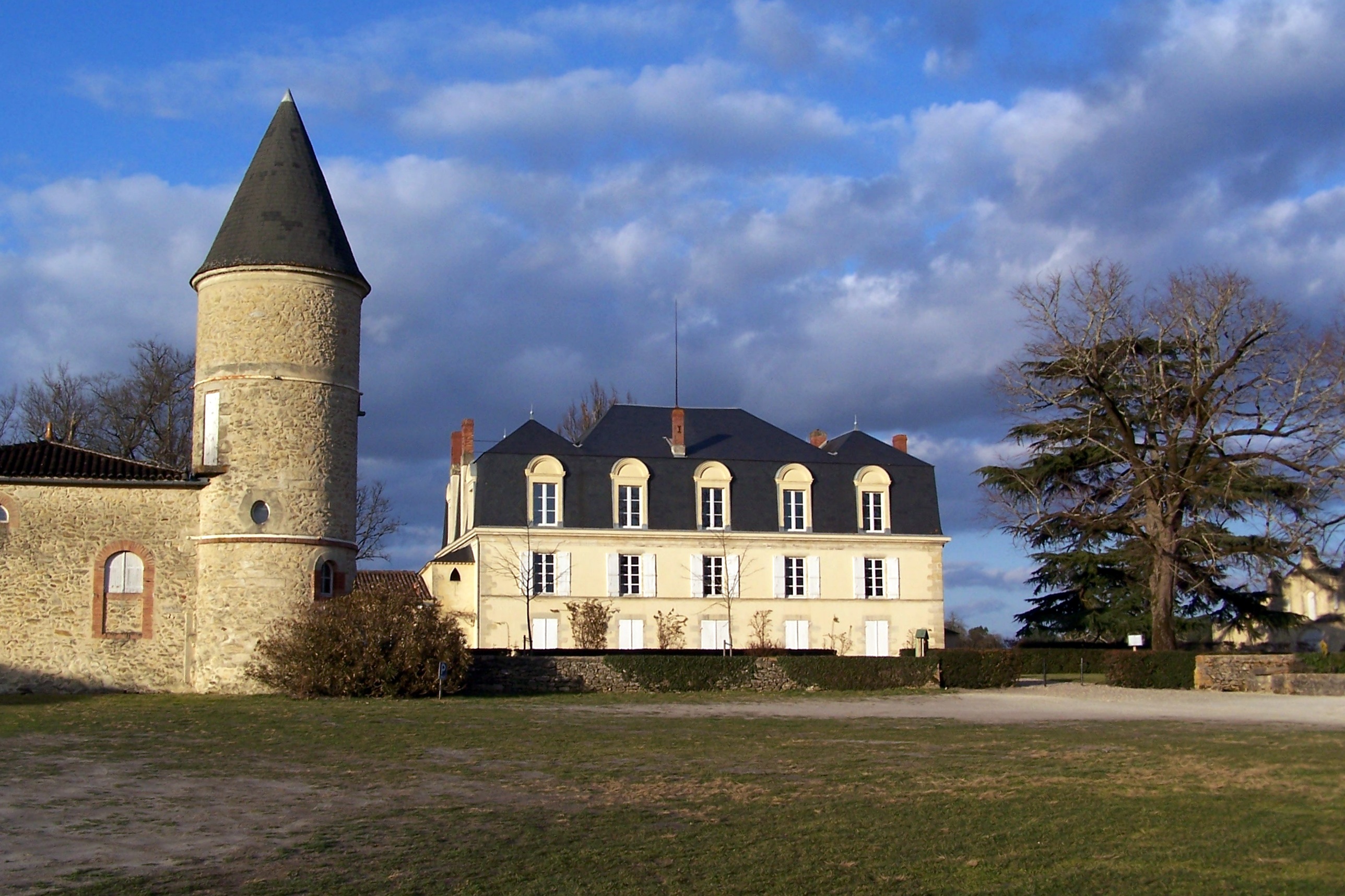 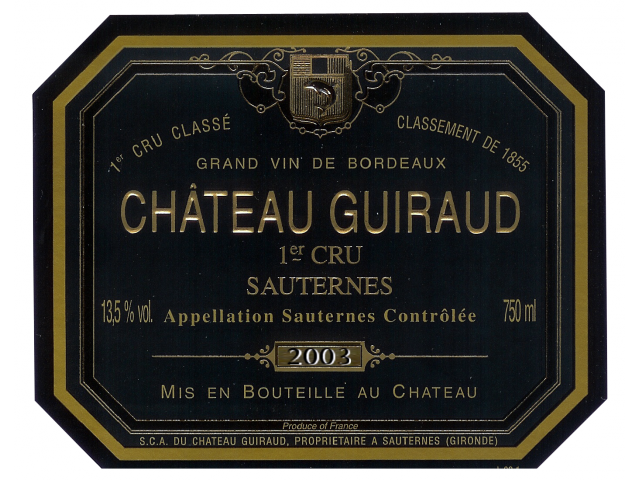 Our next stop was at first growth Château Guiraud, also in Sauternes, one of the appellation’s leading producers. While we were not particularly impressed with the 2013 second wine (Le Petit Guiraud), the 2003 grand vin was aromatic, silky, and not as big and fat as one might expect. We had a long chat with Xavier Planty, who is also president of the local winegrowers association. He talked to us about the issues facing Sauternes at the present time as well as Guiraud’s organic winegrowing methods. 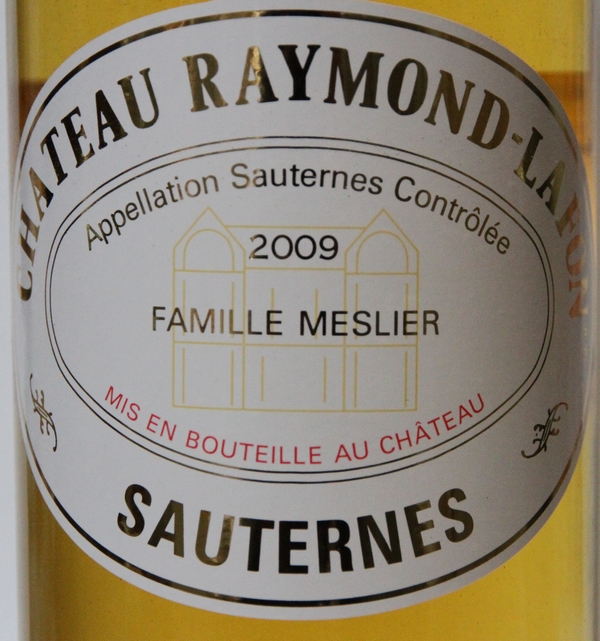 We went on to nearby Château Lafon (commune of Sauternes). While the wines were relatively inexpensive, they did not leave a lasting impression. We went from there to Château Raymond-Lafon (Sauternes) an estate well-known in the US. Although not classified, Raymond-Lafon is frequently considered on a par with the grands crus. We tasted the 1998 and 2009 vintages, starting with the older wine. This was rich, sensual, and long, but perhaps past its best. The 2009 was unsurprisingly more vital. The nose could have been more expressive, but the wine was lovely on the palate with a fine aftertaste. 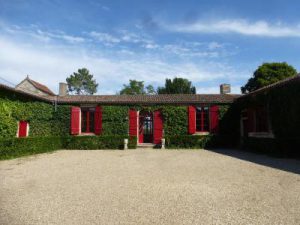 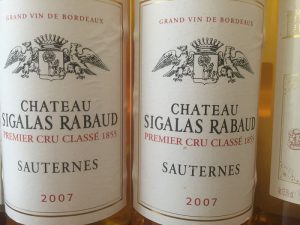 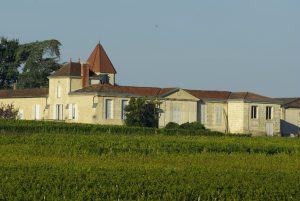 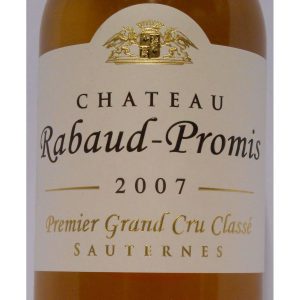 Before lunch, we stopped at two premiers crus, both in the commune of Bommes: Sigalas-Rabaud and Rabaud Promis. Once forming a single estate, the wines have a very different flavour profile.

At Sigalas-Rabaud, we tasted the 2014 dry wine, La Demoiselle de Sigalas, as well as the second wine, the 2011 Lieutenant de Sigalas. Both of these were good, if unremarkable. However the 2007 grand vin was very elegant. The owner, Laure de Lambert Compeyrot, seemed pleased when I called her wine “ethereal”. “That’s what we’re aiming for”, she said.
Rabaud-Promis, on the other hand was foursquare, quite rich, and sweet. We tasted their second wine, Raymond-Louis, from 2013, which was rather cloying. The 2010 grand vin once again showed great richness, but had better balance, as well as subtle peach and apricot flavors. I bought a bottle. Just think: a 6 year-old first growth Sauternes from a fine vintage for under 25 euros a bottle. Sauternes can be tremendous value for money, especially when you consider their low yields and how far a bottle goes compared to a dry white or red wine.

Lunch was at the Auberge des Vignes in the heart of the thriving metropolis of Sauternes (population: 762). This traditional small restaurant specializes in meats cooked over vine cuttings. To save time in order to see a maximum number of estates, we had just one dish: entrecôte frites. This was delicious, reasonably priced (18 euros), and served quickly despite the fact that every table was taken. 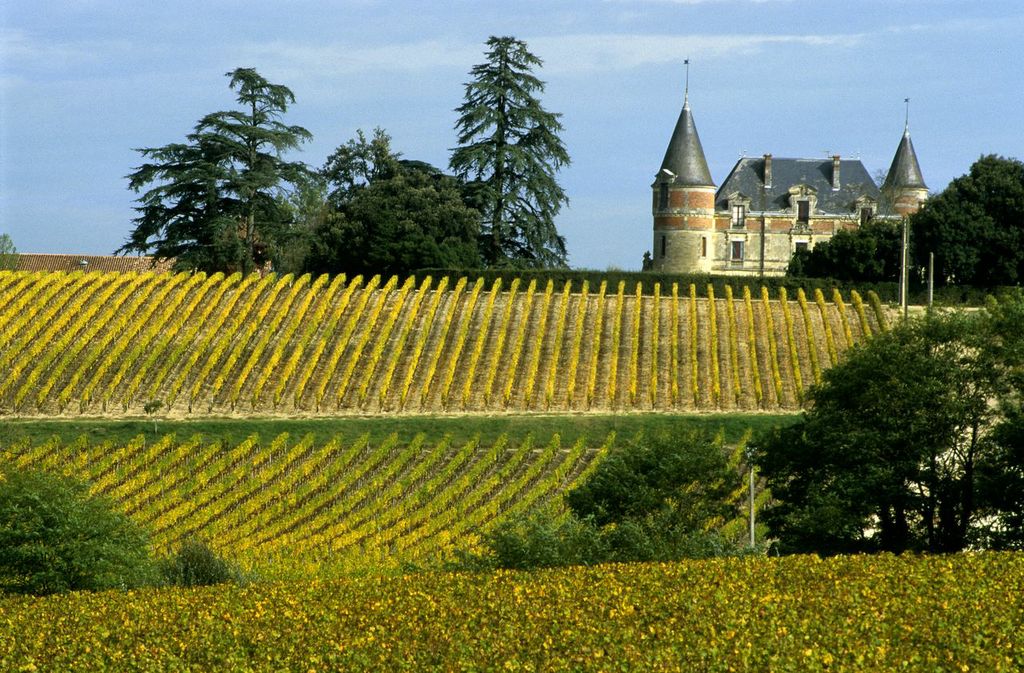 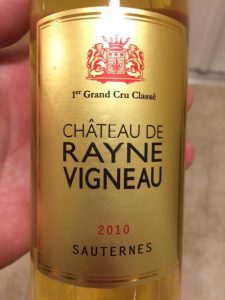 We continued our pilgrimage with a stop at first growth Château Rayne Vigneau in Bommes. This was acquired just over a year ago by Franco-American businessman Derek Rémy Smith. We sampled 2010 Madame de Rayne, the second wine, which was a bit simple and syrupy, and then the 2010 grand vin. The latter was much better, with subtle aromas of pineapple, ginger, etc. and a much longer aftertaste. 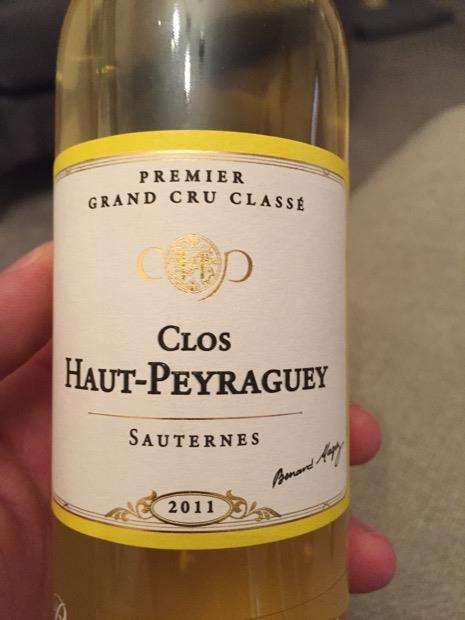 I have been a follower of Clos Haut-Peyraguey, another first growth in Bommes, for years because it was hugely reliable and not very well-known – and therefore not very expensive. The estate was purchased by Bernard Margrez in 2012 and I have only had the wine once since then. We started off tasting the second wine, 2013 Sypmphonie. This was balanced and soft, but lacked oomph. It reminded me more of a Sainte-Croix-du-Mont or a Loupiac.  We went on to try the 2014 grand vin. This had an interesting tropical fruit bouquet and good acidity on the palate. Unfortunately the sweet, luscious attack retreated into a shortish finish not up to first growth level. 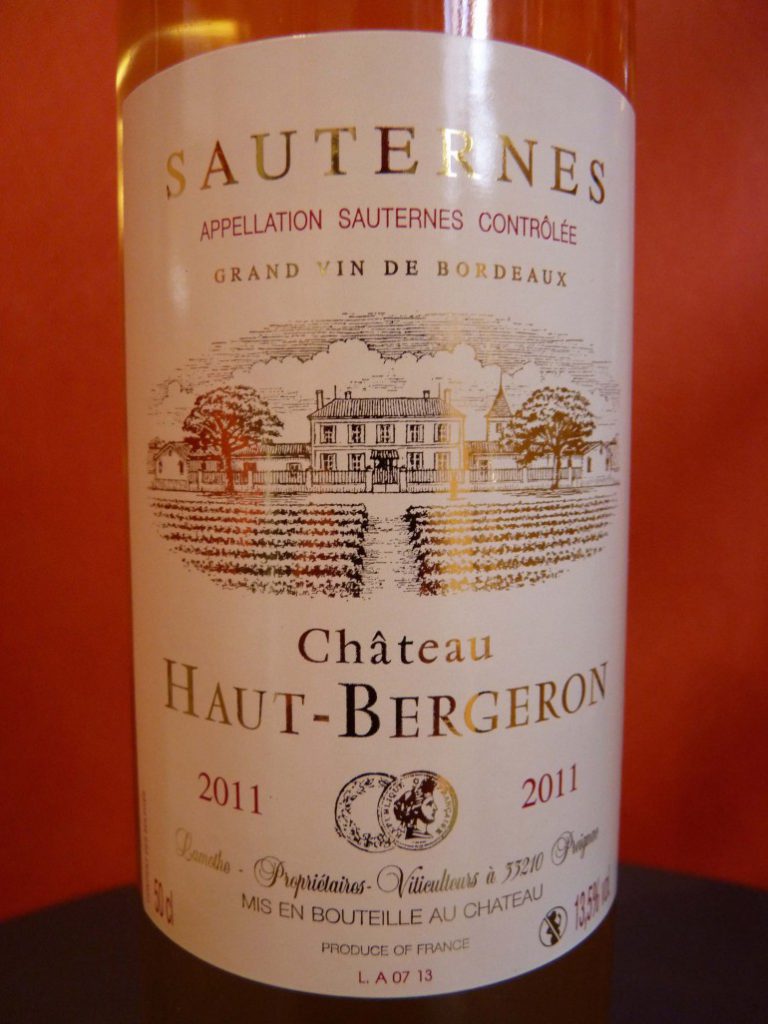 We next had a brief interlude at Domaine de Carbonnieux (Bommes). The wines there were very inexpensive, but unfortunately unworthy of special attention. It was a different story at the next estate, one of my favorite Sauternes, Château Haut Bergeron in Preignac. The Lamothe family have been making delicious wines there for many years. These are also good quite young and the second wine, Château Fontbride is nearly as flavorsome. We tasted the 2013 and 2011 vintages of the grand vin. I came away with 2 bottles of the 2010 and even bought 6 half-bottles of the 2015 en primeur. 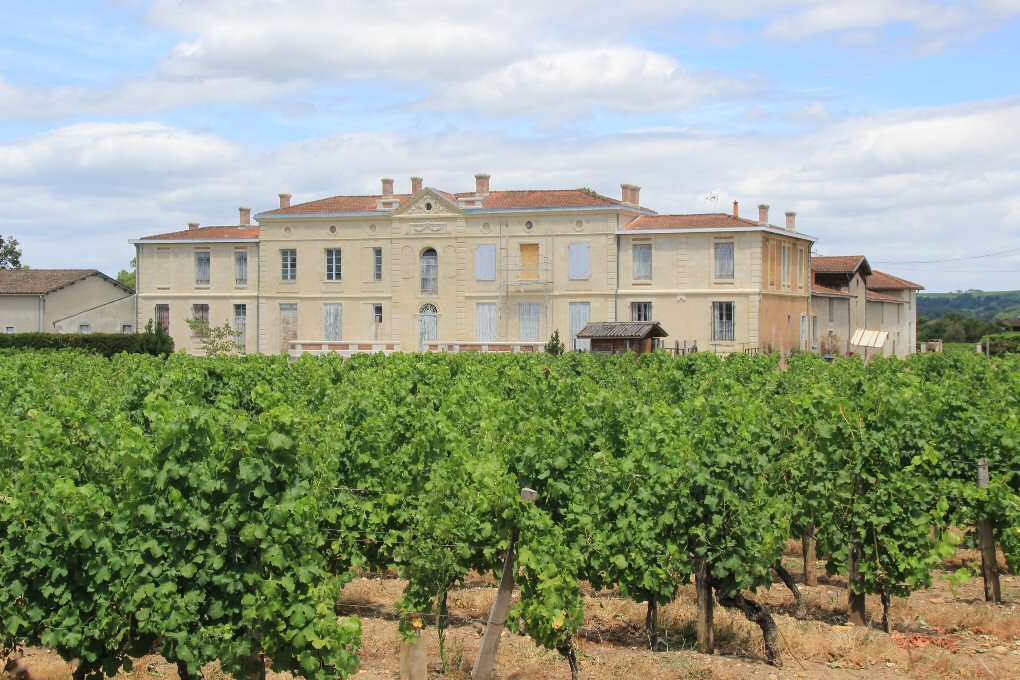 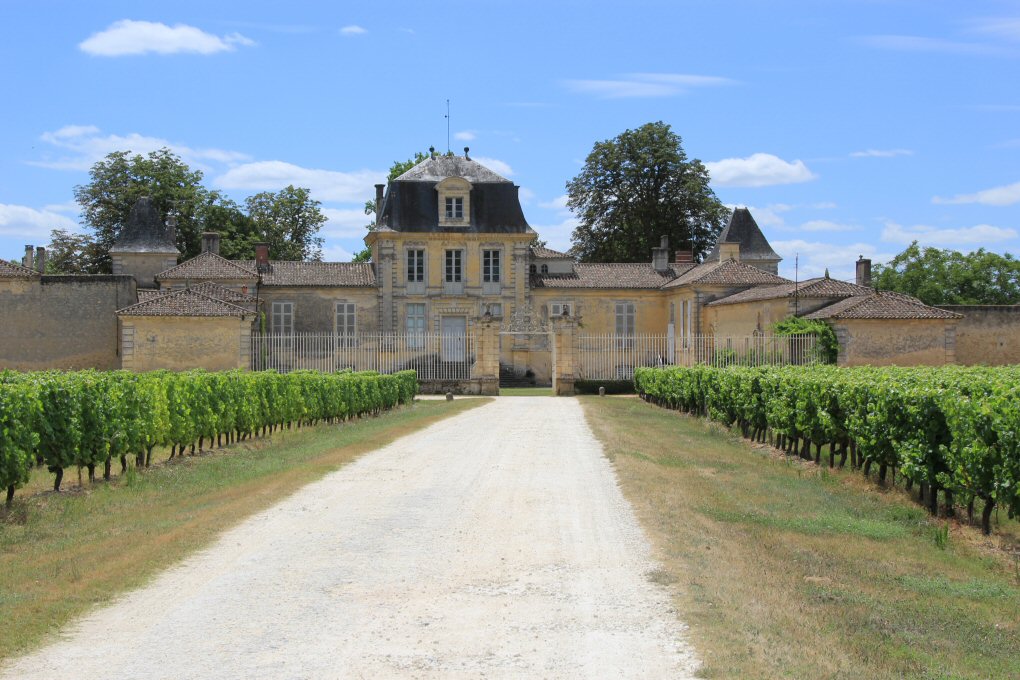 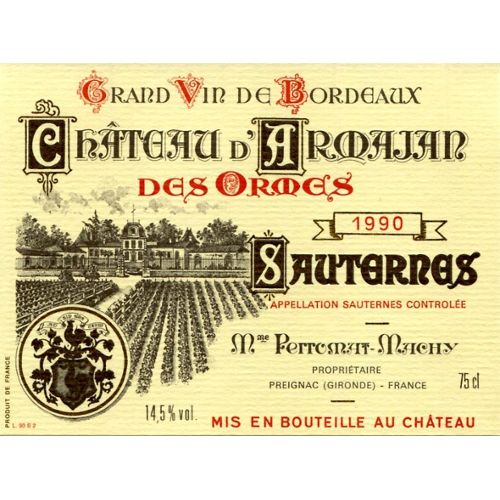 We went from Haut Bergeron to Château Laville, also in Preignac. We enjoyed the 2011, but this estate also makes ones of the most weird and wonderful wines in Bordeaux, a late-harvest botrtyized blend of Riesling and Gewurtztraminer grown in the Sauternes appellation! I had picked up a few bottles last year and was anxious to come back for more. There can be no better wine for blind tastings. Who could ever guess its origin? Of course, it is sold as “vin de France” instead of Sautenes, but it’s a very fun and fascinating wine.

Stepping back in time, we went to Château d’Armajan des Ormes, located practically in the center of Preignac. The imposing and ancient château was largely rebuilt in the late 17th century. It belongs to the Perromat family, who also have large vineyard holdings elsewhere in Bordeaux. We compared the 2013 second wine (Ch. Le Juge) and the grand vin from the same year. These were old-fashioned in style and not especially noteworthy. 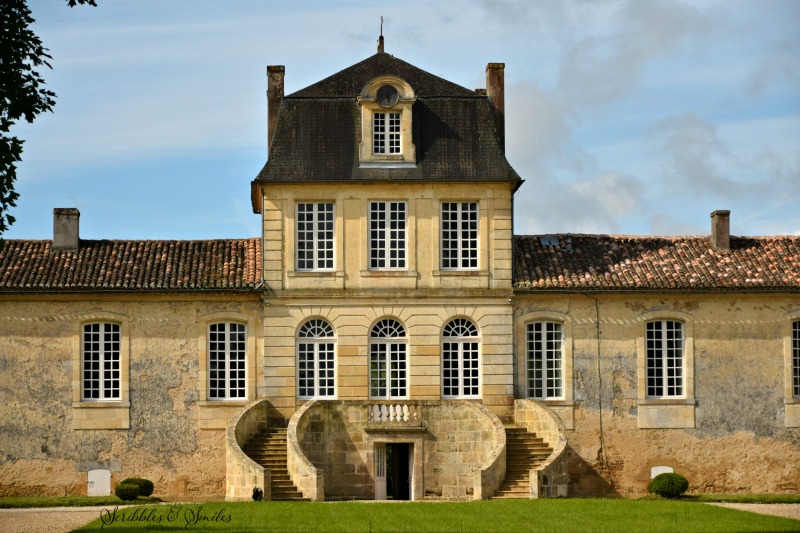 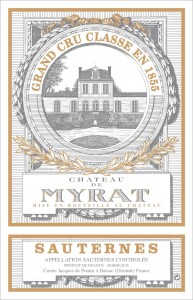 The next visit was to Château d’Anna in Barsac, a tiny 2-hectare estate with a correspondingly tiny cellar located. When I say tiny, the room where the barrels are kept and bottles stored must be all of 16 square meters! The wine is made by Xavier Dauba, cellarmaster at the Grand Enclos du Château de Cérons. 2011 Ch. d’Anna had a noticeably amber, coppery color and a rich ripe bouquet. The wine melts in the mouth with a strong botrytis character. An interesting, rare wine somewhat on the heavy side.

Resembling Château d’Armajan des Ormes architecturally, Château de Myrat in Barsac is an impressive structure. Second growth Myrat belongs to the venerable De Pontac family, who once owned Haut-Brion. We had a chat with Xavier de Pontac and admired his collection of pheasants and peacocks. We also tasted three vintages of his wine: 2012, 2010, and 2001. These were very Barsac in style: not as heavy as many of the Sauternes and with marked minerality on the finish. The 2010 featured fresh cutting acidity and the 2001 was interesting, but too old. 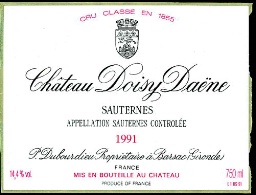 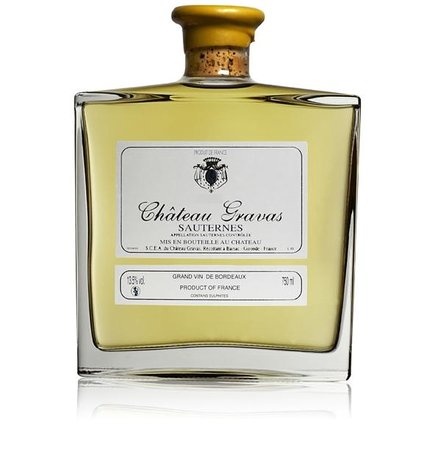 We then drove to second growth Doisy-Daënes, also in Barsac. This is the fief of the Dubourdieu family. Denis Dubourdieu, Dean of the Faculty of Enology and one of the great figures in Bordeaux, passed away this year and is greatly missed. The family’s complete range of wines was on show, but we focused on the Barsacs, enjoying the 2013 Doisy-Daëne (a good wine from a challenging year) and the surprisingly successful and youthful 1991 (Robert Parker gives one of his all-time low vintage ratings for 91 Sauternes: 70/100). The latter had a bouquet of crème brûlée and was also reminiscent of a Tokaj. It had a lovely long finish.

Our sixteenth (!) and last stop was just across the road at Château Gravas. I can hardly be objective here because I have known Florence and Michel Bernard for a couple of decades. This last visit was more of a social one, with a tasting of the light, but attractive 2013. The Bernards have a long tradition of welcoming visitors and they were thronged. There was a joyous atmosphere and this was a great way to end a busy, but fun and enlightening day.