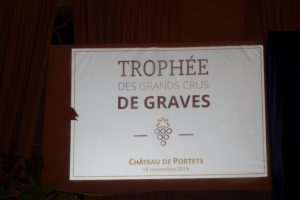 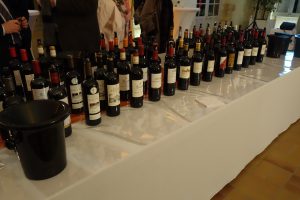 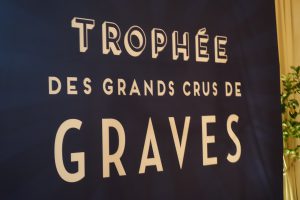 In the same way as there is a basic misunderstanding of what the word “Bordeaux” means in English-speaking countries (where it is often equated with the expensive tip of the pyramid), the name “Graves” makes many people think only of the region’s great growths – all of which are located in a sub-appellation of the Graves, Pessac-Léognan, created in 1987. To confuse matters, these famous châteaux continue to be called crus classés de Graves rather than Pessac-Léognan…

This northern part of the region (1,500 hectares for Pessac-Léognan compared to 3,500 for the rest of the Graves) is also referred to as Les Graves de Bordeaux since it starts just outside the city. In fact, Bordeaux is actually IN the Graves, and until recently there were actually one or two wine producing estates within the city limits!

Many Anglo-Saxon consumers also think of white wine when they think of Graves. However, the 43 communes in the appellation produce 70% red wine… 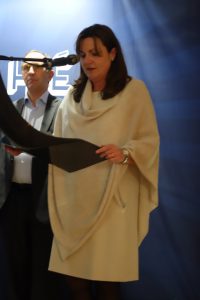 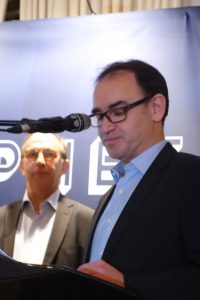 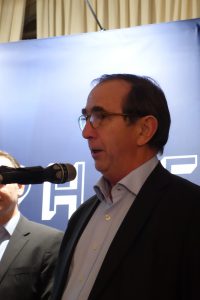 M. Bernard Burtschy, President of the Jury and journalist

I was invited to an awards ceremony, the Trophée des Grands Crus de Graves, on November 16th at Château de Portets. On this occasion there were about 40 red wines to taste and perhaps 30 white wines. The room was rather crowded and tasting conditions not ideal, but here are my notes for a dozen red wines.

These were all from the 2014 vintage.

The overall level was quite good and none of the wines were expensive. Furthermore, almost all of them were showing well just two years after the vintage and will be drinking well quite young.

IMPORTANT: Please consider the points within the following context. I am a tough grader. For me, acceptable wine is 10/20, 12/20 is OK, 14 is quite good, and 15 on up is special.
Also, obviously, we are also talking about wines that cost only a fraction of the grands crus. 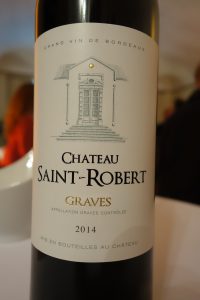 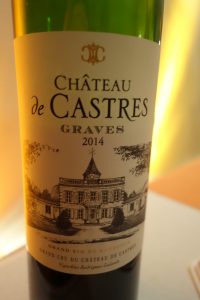 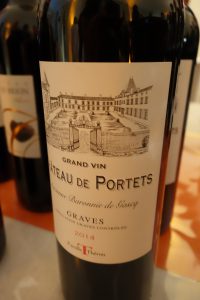 2014 Château Saint Robert
Color: medium light and very purplish
Nose: fresh, natural, not messed-about-with, and showing uncomplicated red fruit aromas with some candied fruit
Palate: fluid to the point of being a little dilute with vanilla and caramel overtones from oak. Already drinking well. A good commercial style, but with a short finish.
14/20

2014 Château de Portets
Color: not very deep, but brilliant and attractive
Nose: black fruit, especially blackberry. Lacking in concentration. Pure and sweet but not confected.
Palate: Starts out round, mouthfilling, and sensual, but then drops before picking up again on the finish, which features round, slick tannin. Juicy, simple, and delicious for early drinking.
14/20

2014 Château de Castres
Color: youthful, not deep, and not perfectly limpid
Nose: off, acetic acid?
Palate: the round, simple, easy-going side damaged by searing acidity. Not rated. Not successful, but would be drinkable with food. 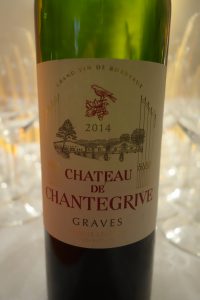 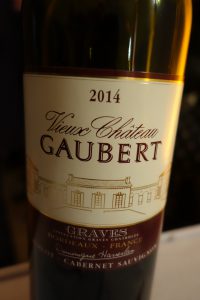 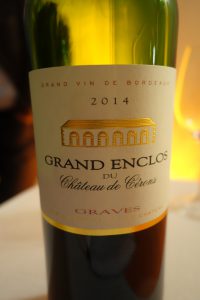 2014 Vieux Château Gaubert
Color: deeper than most of the wines, quite nice
Nose: good cherry aromas overlaid, but not overwhelmed by oak. Simple, but classy.
Palate: Big and chewy. Melts in the mouth. A wine that seems more well-made than a vin de terroir, but quite elegant. The only flaw is the short aftertaste.
14/20

2014 Château Chantegrive
Color: good, looking a little older than its age
Nose: strong toasty oak and blackberry fruit. Modern and vital.
Palate: Plenty of volume and quite round, but hollow on the middle-palate and fairly oaky. This oak influence is too great for the wine’s intrinsic structure.
13/20 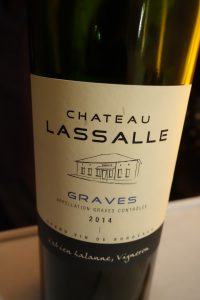 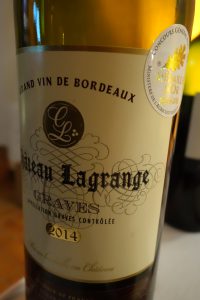 2014 Château Lassalle
Color: lovely and deep
Nose: delicate balance between fruit and oak.
Palate: suave, fluid, and typical of its appellation. Classic and understated. Maybe a little dry on the aftertaste, but very nice indeed. Suitable for fine cuisine.
14/20

2014 Château d’Uza
Color: deep and fine
Nose: bright upfront berry fruit and attractive oak that is not overdone
Palate: round, delicious, and strangely Pinot-like! Shortish finish and in a non-traditional style, but sexy.
14.5/20

2014 Château Lagrange
Color: medium-deep
Nose: smoky Graves aromas and fresh fruitiness, but not much substance
Palate: sharp, angular, and somewhat bitter. These qualities will not disappear with age. Tough (rather than rustic) tannin.
10/20 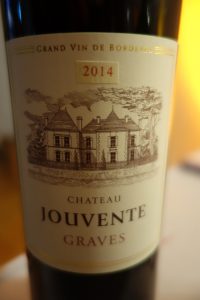 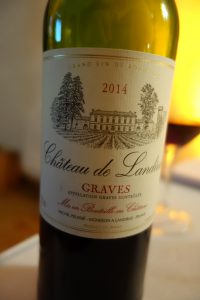 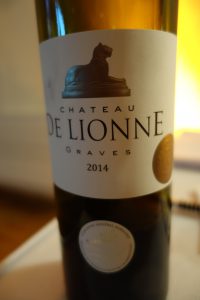 2014 Château Jouvente
Color: purplish-red
Nose: ethereal, but too understated.
Palate: very soft cushioned attack, then sinks into a hole, then rebounds with an aftertaste that a bit too hard compared with the wine’s overall feminine profile.
11/20

2014 Château de Landiras
Color: little cloudy and not very deep
Nose: seemed wimpish, but there’s some subtle blackberry fruit lurking there and a faint sweetness that might become more expressive with aeration (the bottles were uncorked and served).
Palate: foursquare but somewhat weak on the middle palate. OK, but lacks depth and length.
11/20