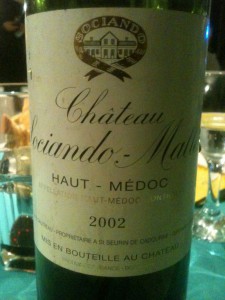 Everybody loves a success story, and Sociando Mallet certainly falls into that category. When Jean Gautreau bought the estate in 1969, there were just 5 hectares of vines. There are currently 85! However, it was not only production that increased. Sociando Mallet also built up a solid reputation for quality and established a loyal following.
The vines grow on a rise overlooking the Gironde Estuary east of the village of Saint-Seurin-de-Cadourne, the northernmost commune in the Haut-Médoc appellation. The soil is very gravelly, with a clay-limestone subsoil.
Sociando-Mallet did not even ask to be included in the most recent cru bourgeois classification. They felt above it, and the price their wine commands tends to confirm that…
The first time I tasted 2002 Sociando was at the Darroze restaurant in Langon, where I had been invited to lunch by Xavier Gonet-Médeville of Ch. Gilette in Sauternes. This was about 5 years ago and the wine was quite closed at the time. The situation was compounded by the fact that young wines rarely have the chance to open up in restaurants, even when properly decanted.
Anyway, by August 2015, this wine was, unsurprisingly, much more developed. It was decanted 3 hours before the meal. The color made the wine appear younger than its age.
As for the bouquet, Sociando is noted for displaying a decided green pepper quality in certain years, to the point where some people have found it too overpowering. The 2000 vintage is a case in point. Personally, I have never felt this way, but that green pepper factor was there in the 2002, albeit in an understated way.
The wine has a velvety texture and good grip on the palate. It also seems to share characteristics with nearby Pauillac. My friends know that I prefer my wines on the young side, but at 13 years I must admit that this is still not all it could be. It is heady and virile, the perfect wine to have with red meat, making up in vigor and assertive Cabernet fruit what it may lack in elegance. That having been said, Sociando Mallet has just 48% Cabernet Sauvigon (and 5% Cabernet Franc), but this variety seems to dominate the flavor profile.
I would love to taste this wine blind in a line-up of California Cabernets… 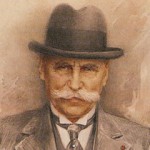 I have visited Château Talbot, a 4th growth Saint Julien only once, a long time ago, and have not tasted their wines as often as I’d like to… I have a fond memory of the odd proprietary bottles the Cordier estates used to come in, with a picture of old man Cordier and his white moustache on the embossed part.

Times have changed, and most of those estates (Gruaud Larose, Meyney, Lafaurie-Peyraguey) have now been sold. Château Talbot, though, acquired by Désiré Cordier in 1917, has been in the family ever since. Talbot has 106 hectares of vines, which is absolutely mammoth in Burgundian terms, and big even in Bordeaux. They also make a small quantity of white wine, Le Caillou Blanc, AOC Bordeaux.
I had just one bottle of Talbot in my cellar, from the 2001 vintage, one usually overshadowed by 2000. However, I’m a huge fan and it is not rare for me to prefer a 2001 to the 2000 from the same château.
So, we enjoyed the 2001 Talbot just after the Sociando-Mallet. The Talbot is the weightier wine, with a deep regal color. The nose is gorgeous, everything I love about the Médoc and classic Bordeaux. It smells like a room with old mahogany furniture polished with beeswax, as well as subtle, pure blackcurrant fruit – none of the famous bretty/phenolic odors sometimes referred to as the “Cordier stink” that existed years ago… The wine is also very traditional, refreshing, and well-balanced on the palate. It is a lovely drink, and while not at its peak, is not far off. This 2001 Talbot is an excellent wine to serve to people who think that “modern Bordeaux” is over-extracted, over-oaked, and over-alcoholic. In fact, it is just the opposite. 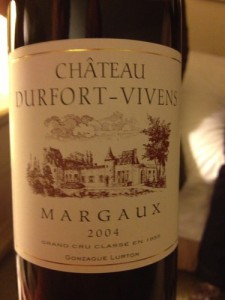 Château Durfort-Vivens is one of several great growths owned by the Lurton family, but it never seems to attract the same attention as the other Lurton great growth in Margaux, Ch. Brane-Cantenac. The fact that Durfort has 55 hectares of vines compared to Brane’s 75 may have something to do with this, but that doesn’t explain everything. I once enjoyed a lunch with Lucien Lurton and he told me that the “dur” (meaning “hard”) in Durfort describes the wine’s character. It is perhaps this slightly austere and unyielding side when young that makes Durfort less popular.
The Lurtons sold the actual château building to Philippe Porcheron, who renamed it Château Marojallia. The château is now a luxury hotel as well as the name of the AOC Margaux garage wine Monsieur Porcheron produces.

2004 Durfort Vivens has a browning rim and dark core, with thick legs. The nose is soft and smoky, with subtle cosmetic and chocolate overtones, along with a major earthy/truffle component.
The wine starts out smooth on the palate, showing textured tannin, but the finish unquestionably displays that Durfort hardness, and the wine is starting to dry out.  While enjoyable at table, this smelled better than it tasted, and the balance is such that any evening-out of the tannin in a few years will leave the fruit behind. In short, I am somewhat disappointed, especially since I rated the wine highly when tasted en primeur in spring 2005. 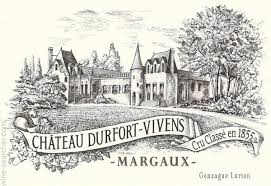