“Les Lawton, une Dynastie Bordelaise du Vin” by Alain Blondy
Published by Le Festin.
189 pages. 17 euros. ISBN 978-2-36062-262-7
I was given this book, published in 2020, as a Christmas present and finally found a moment to read it this summer. “Les Lawton” is definitely for the hard-core Bordeauxphile not only because a good grounding in French required, but also a certain knowledge of the inner workings of the wine trade and Bordeaux society. 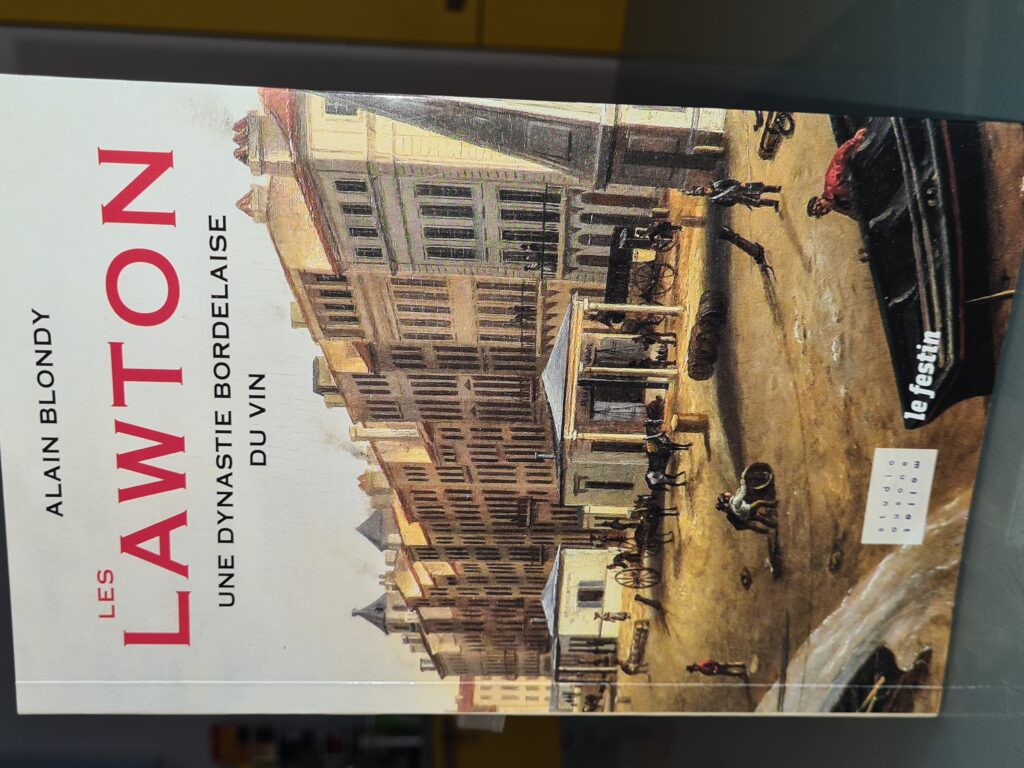 Wine lovers know that a majority of châteaux sell their wine through négociants (which can be translated as “shippers”), but are not necessarily aware that courtiers, or brokers form an essential link between the two parties. Although most often overlooked, their role is vital. They make sure that the samples shippers are presented with, and the prices at which they are offered, faithfully correspond to purchase orders.

Three quarters of all purchases by négociants go through the hands of brokers.

In 1739, at the age of 23, Abraham Lawton came from Cork (Ireland) to Bordeaux to establish a négociant firm. However, he soon saw that his true vocation was as a broker. He therefore started a business that exists to this day, having changed its name to Tastet et Lawton in 1830 when his family took on a partner. The Lawtons kept a detailed vintage report as of 1815. This, as well as volume upon volume of transactions, has become an invaluable source for scholars.
The 1835 painting on the book’s cover shows the historic Quai des Chartrons where Tastet et Lawton are located.

The Lawtons were Protestants, as were most of the other Northern Europeans who formed the backbone of the Bordeaux trade. Followers of Luther and Calvin have had a very checkered history in France. Persecution during the wars of religion in the late 16th century and the Saint Bartholomew’s Day Massacre came to an end when Henri IV, himself raised a Protestant before converting to Catholicism, issued the Edict of Nantes in 1598 granting Protestants religious freedom. This was unfortunately negated by the Edict’s revocation in 1685 by Louis XIV, but restored in 1787. Since then, they have suffered no discrimination.
n any event, the Lawtons’ steadfast devotion to their faith and country of origin is a leitmotif of their presence in the capital of Aquitaine. The book relates a dizzying succession of marriages with other members of the local Protestant community, many connected with the wine trade.
While hardly a rabid feminist, I could, however, not help but notice that the book focuses almost exclusively on Lawton men: women are confined to their role as wives and mothers, period.
The Lawton men were also involved in activities outside their profession: sports, including the mythical Primrose tennis club, and municipal government.

Seeing as the author is a former professor of history at the Sorbonne (with nearly 20 books to his credit), the book focuses a great deal on French history, particularly the war years. The Lawtons’ involvement is described in great detail, particularly Daniel’s heroism in WWI and during the troubled period of the Occupation. Needless to say, trade, particularly with Nazi Germany, was viewed with great suspicion after the Liberation, and Daniel successfully proved to the new regime that he had acted honorably. This was at a time when several négociants were found guilty of collusion with the enemy and heavily fined.

A well-known episode occurred between the wars, when Daniel Lawton accompanied American millionaire Clarence Dillon during his search for a famous wine estate to purchase in a depressed market. Legend has it that Dillon was interested in buying Cheval Blanc, but due to poor weather, Lawton took him instead to nearby Haut Brion, which Dillon acquired in 1935.

I have been privileged to know two members of the Lawton family. I worked with the ebullient Jean Lawton at the maison De Luze and met Daniel Lawton (son of the aforementioned Daniel) on several occasions. He was a strikingly handsome man who opitimized the genuine class of the Bordelais, as opposed to the more stuffy and snobbish among them. His knowledge of the region’s wines was nothing less than extraordinary.

This direct family line came to an end with Daniel’s death in 2015, and his two nephews took over the brokerage firm of Tastet and Lawton. Another nephew, Pierre Lawton, heads a successful négociant firm, Alias Bordeaux.

I must once again point out that this book is not easy going for the English speaker unfamiliar with French history. But it is worth the effort and full of interesting nuggets.